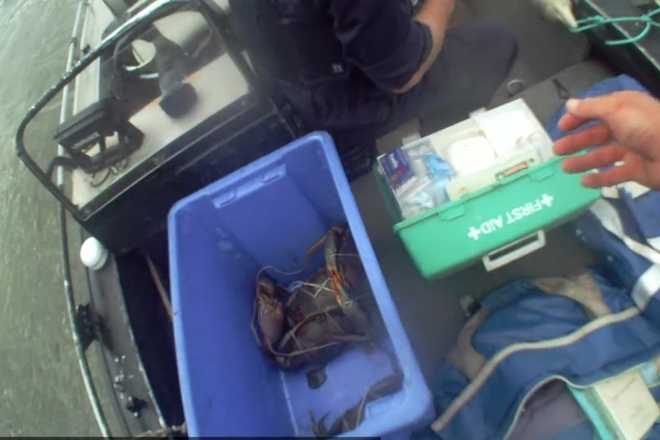 A RECREATIONAL fisher in Hervey Bay has been fined $5000 and ordered to pay restitution after admitting to interfering with commercial crab pots and illegally selling mud crabs.

“The officers intercepted the man’s boat on the Mary River and found five mud crabs on board,” Mr Furner said. “The man admitted they were unlawfully taken from five commercial crab pots. An investigation revealed that commercial crab pots possessed by the man were removed from the Mary River unlawfully. The man subsequently admitted to illegally selling mud crabs and interfering with crab apparatus. We make no apologies for being tough on illegal fishing. This is what it takes to build a legacy of a sustainable fishery for our children and grandchildren.”

Mr Furner said the Maryborough Magistrates Court also ordered the crab pot pincher to pay $560 in restitution to the commercial fisher for the loss of his catch and pots.

“This hard-working commercial crabber has had valuable infrastructure interfered with and lost valuable income from someone stealing his mud crabs,” he said. “People interfering with crab pots is one of the biggest complaints that we get from the public and the Queensland Boating and Fisheries Patrol has been cracking down on it through additional patrols and the use of cameras and drones. Our state’s fisheries resources belong to all Queenslanders and it’s our job to protect fish stocks for the future.”

People who suspect illegal fishing activity, including a crab pot pincher or interference with pots, should report it to the 24 hour toll-free Fishwatch hotline on 1800 017 116.

@@BNBFishingMag
Previous What’s on the menu for the Easter long weekend?
Next Secrets to catching big snapper in Moreton Bay