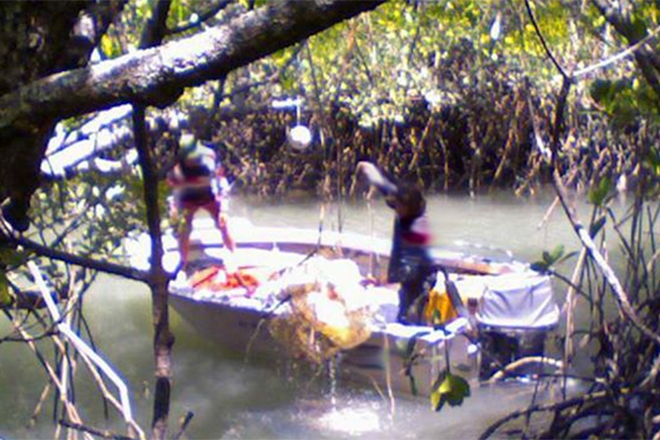 A 12-MONTH Queensland Boating and Fisheries Patrol surveillance operation in north Queensland has resulted in 25 people being charged with interfering with crab pot apparatus.

QBFP north Queensland district manager Glenn Shiels said the operation, which finished in January 2018, targeted Ingham, Townsville, Airlie Beach and Mackay following complaints from recreational and commercial fishers alleging interference with crab pot apparatus. “This surveillance operation demonstrates QBFP’s focus on the detection of interference with crabbing apparatus across Queensland,” Mr Shiels said. “The operation resulted in 22 infringement notices being issued, with fines totalling $27,490 while three offenders received official cautions. A total of 10 offences were detected in Townsville, nine in Mackay, five in Airlie Beach and one in Ingham.”

Mr Shiels said it was an offence for a person to interfere with crab apparatus that do not belong to the person and this included disturbing or lifting the apparatus.

“Under Fisheries regulations, stealing fishing apparatus you didn’t set, including crab pots, is a criminal offence and those caught will be referred to the police,” Mr Shiels said. “On-the-spot penalties for crabbing-related offences include fines ranging from $252 to $504 for undersized crabs and excess possession limits to $1261 for interfering with crabbing apparatus. Maximum penalties can exceed $126,000.”

Mr Shiels said interference with crab pots was an issue across Queensland and a high percentage of fisheries complaints received by QBFP related to crab pot interference.

“The problem occurs in waterways across Queensland and an increased incidence of crab pot interference occurs near higher population centres,” Mr Shiels said. “QBFP conducts targeted operations, which include the use of sophisticated covert camera technology, to ensure compliance with fisheries regulations in response to community concerns and specific intelligence information. Crabbers are also encouraged to take responsibility for monitoring their own fishing apparatus and to ensure pots and dillies are marked correctly with the owner’s name and address.”

If you suspect illegal fishing, whether seen in person or online, report it to the Fishwatch hotline on 1800 017 116. Don’t engage with the person, as this can compromise an investigation.