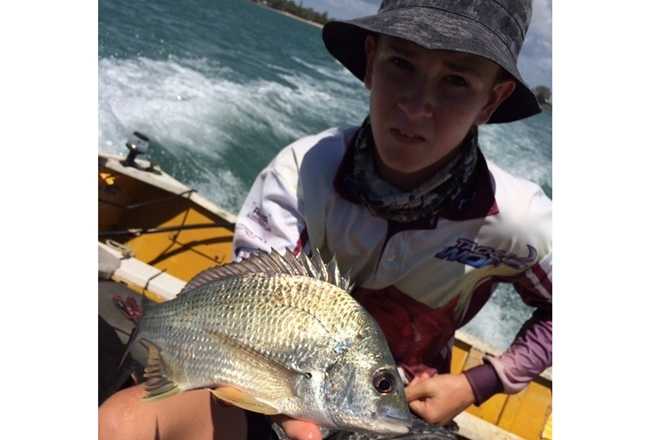 Angus Mcaskill showing off a solid bream he caught recently.

Cracker weekend ahead at Bundaberg

With the weekend fast approaching, it’s looking like it’s going to be a cracker, with almost calm conditions forecast for the Bundaberg area.  If this weather holds, it’s going to give the big boats another chance to head out wide.

The fishing out there has been great, with a lot of big pearl perch, jobfish and snapper being caught out on the shelf.  The islands have produced good numbers of coral trout, red throat sweetlip, parrot and big hussar. A lot of the boat wrecks have produced some nice red jew, cobia and spanish mackerel.  The gutters have also fished well for grass sweetlip, parrot and hussar.  The coast still has plenty of mackerel and tuna moving along it.  Spinning metal lures has been the way to catch these speedsters.

River systems such as Baffle Creek and the Kolan River are fishing okay, but some of the winter weed has moved into the mouths, making it hard to fish.  Fishing further upstream has produced a few bream, grunter and the odd jack. The Burnett and Elliott Rivers are clear of this weed and they have both been fishing well also.  The mouth of the Burnett has had a run of small school mackerel and tailor along the North Wall, and a few bream and three-tooth jew have been caught around the Port.  The sand flats around Fairymead have been producing some nice whiting, flathead and a few blue salmon.  Further upstream has seen good numbers of bream and a few nice grunter.

Rumour has it that there are a few mud crabs about, as well as a good number of big banana prawns.

Lake Monduran fished well this past week with some great barra caught.  The average size now is 70-80cm, so they are hard-hitting and fight well.  Come summer, the barra fishing in Monduran will only get better with the warmer weather.