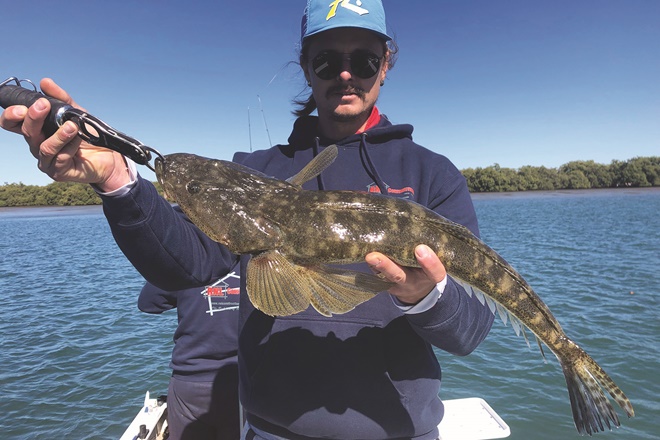 Roman landed this 67cm flathead on a recent charter in southern Moreton Bay.

WELL I’m finally on the water again after another few months off with my dodgy back.

It’s great to be back. You don’t realise how much you appreciate going out on the water several times a week until it’s taken away from you and you’re pretty much going crazy stuck in bed watching telly. First day back I was lucky enough to do a fishing charter with Rob from Sydney. It was a bit wet and windy but it was good to get out there and before we knew it we picked up a couple of flatties on the troll and casting. I had been off the water for about eight weeks, so I just went to where the fish were last year at around the same time, targeting them on the right tide.

This shows the importance of keeping a diary, especially if you are not on the water as much as you would like to be. The tide turned and started to run in, and once too much water was on the banks we moved out wider and cast plastics over isolated wrecks. We caught a few small fish but nothing of any size. Once the tide had come in and put even more water on the banks, we ran south among the mangroves and targeted more flathead.

Luckily the tide had come in because the wind was starting to pick up and it started raining, so we found some protection around the mangroves. We drifted down the bank, casting in front of ourselves with soft plastics but weren’t able to raise any fish, so decided to rig a couple of Tango Shads and see if we could troll a flathead. It didn’t take long and on the first pass Rob was hooked up to a nice fish. It made a couple of good runs towards the mangroves but Rob soon had the fish under control and before we knew it Rob’s personal-best 71cm lizard was in the boat.

Being a nice big girl, we took a couple of quick pics and sent her on her way to fight another day. If you work a bank with one technique and it doesn’t work, that doesn’t necessarily mean no fish are there or they won’t bite. Try another technique and you could get the result you’re looking for.

We did a few more runs and picked up a couple of bream before heading home. Since I’ve been back, I’ve also been trying to catch up on getting a few of my tuition clients out on their practicals. I have to thank everyone for being so patient waiting for me to get better.

One of my first practical sessions was with Dave and he wanted to learn how to chase lizards. Previously he did the off-water tuition course, so now we were going to have a little practical session chasing flatties on high tide. We put into practice what he learnt in the classroom.

First, we went to the areas where we would target these fish on high tide, looking at the depth and colour of the water, selecting the lure we would use, which in this instance was the Zerek Tango Shad for trolling. We also selected a few soft plastics to cast around the mangrove lines in the form of Zerek Live Shrimp Hot Legs and Live Flash Minnow Wrigglys. Using these techniques we didn’t brain the fish but picked up a couple of flathead in the 50-60cm range for Dave to take home for dinner.

We also did a bit of sounder work and I showed Dave a couple of areas with a bit of rubble ground and structure for him to explore another time. Remember, if you do a course with me, I can tailor it to suit your needs, what you want to target and your level of experience. I have people with very little fishing experience right up to fishos who have fished all their lives but are new to the area.

I can help fast-track them to get a handle on where the fish are, how they feed and the areas they like to inhabit in southern Moreton Bay. I have also been lucky enough lately to head out and have a recreational fish with some of my mates while making sure my back handle working again. We picked up a few nice fish during these sessions and while fishing with mate Adam I landed a fish I wasn’t expecting.

We were casting soft plastics around but weren’t able to raise much action, even though the Lowrance sounder said a few fish were sitting on the bottom. So I decided to cut off the soft plastic and tie on a Zerek Maniac Vibe to see if the extra vibration might create some action. I had it on a 3-6kg rod with 10lb braid because with the fish being shut down I had a nice light presentation to see if that would help. I put in a few casts with the Maniac Vibe and on about the third cast as my lure was making its way to the bottom I felt a solid clunk and the rod loaded up.

I knew it was a solid fish and it had a bit of weight but I wasn’t prepared for what was about to unfold. At first the fish moved away at a reasonable pace but kept down deep. Then I started the usual pump and wind to make a bit of ground on it and thought OK, not a bad little fish, probably a squire or something around the 50cm mark. Then when I got it to about 3-4m under the boat the fish decided to take off.

Now you have to remember we were anchored and my 10lb braid was ripping off at an alarming rate. Adam figured we should probably pull up the anchor at this stage but just as the mono backing was appearing, the fish stopped and changed direction, which allowed me to get more line back on the reel, then it took off in another direction tearing off a heap of line right down to the backing again.

It repeated this process a few times and then went deep and started doing big circles around the boat. At this point I wished I was fishing with heavier gear and I had probably called it for every fish under the sun, from a trevally to a shark to a mackerel. Eventually, after a cracking fight the fish came to the surface and revealed itself to be a Moreton Bay longtail tuna.

The crazy fight wasn’t over yet as the old longtail made a dash for the anchor rope and got to it. Luckily I had tied a double in my braid before my leader and it only rubbed one of the doubles through, so I still had a single 10lb strand of braid left. I got it out of the anchor line and before long Adam had the fish by the tail and under control.

Believe it or not, that was my first-ever Moreton Bay longtail tuna on a lure, and to catch it on really light line and in southern Moreton Bay was great fun. We got a few good pics and some video to record the moment then watched the fish swim away strongly. So all in all, after being off the water for a fair while it’s good to get back out there and into a couple of nice fish.

As we all know with our jobs and lives, we are time poor, so if you can learn more to optimise your time on the water, then why not? Remember, knowledge is the key. Until next month, stay safe on the water.

If you’re interested in any off or on-water tuition classes or just want to do a charter, give me a call on 0432 386 307 or email at seanconlonsfishing@hotmail.com