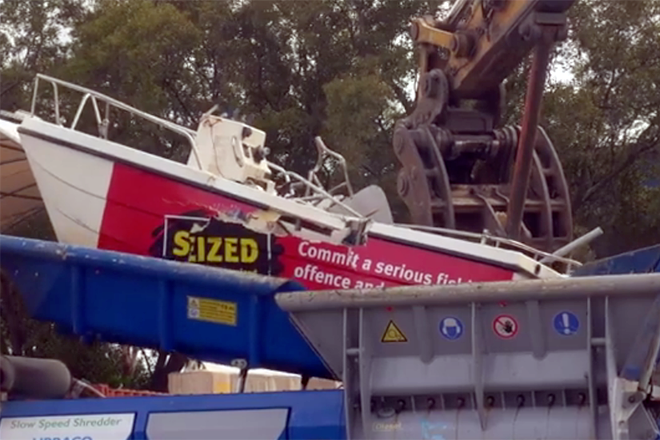 Fishers thinking about breaking the law risk losing their fishing boat. This forfeited boat was crushed at a recycling facility today after the owners used it in the black marketing of redclaw.The boat’s motors were auctioned last week, but the hull had been modified—it was considered unsafe and not suitable for re-sale.For more information, read the full story for details of the offence https://bit.ly/2TijKTb and watch the Queensland Boating and Fisheries Patrol bust https://bit.ly/2SqSxsY

A fishing boat forfeited to the State Government after being involved in the black marketing of redclaw became a crushed boat recently at an Eagle Farm recycling centre.

Minister for Agricultural Industry Development and Fisheries Mark Furner said the crushing sent a stern warning to all fishers about the consequences of committing serious fishing offences. “If fishers are thinking about breaking the rules, they had better be ready to risk losing their fishing boat,” Mr Furner said.

“To reinforce that message, the forfeited vessel has recently been displayed at prominent boat ramps in South East Queensland. “In this particular case, in addition to forfeiting the boat, a recreational fisher and restaurant manager were fined more than $8600 for black marketing of redclaw. Mr Furner said the Queensland Government had moved to further strengthen fisheries laws.

“Unlicensed selling of fisheries resources undermines the legitimate commercial fishing industry and threatens Queensland’s reputation as a producer of high-quality seafood,” Mr Furner said. “Reforms currently before Parliament are aimed squarely at fishers who illegally sell seafood on the black market, including stronger compliance powers for fisheries officers and higher penalties for offenders.

“The community has been calling for change to fisheries legislation for many years and these proposed reforms will bring Queensland fisheries management in line with world’s best practice. “We want to leave a legacy of a sustainable fishery for our children and grandchildren and protect Queensland jobs that rely on the industry.” Queensland Boating and Fisheries Patrol officers intercepted a Kuraby-based fisher delivering almost 200 redclaw to a Sunnybank restaurant in March 2018.

During the investigation, 82 freshwater traps, more than 133 kilograms of redclaw, a 4.5 metre catamaran and a kayak were also seized at Somerset Dam and Brisbane.

A recreational fisher, who was not a first-time offender, pleaded guilty to five charges, including selling fisheries without a licence and using 78 excess and unmarked freshwater traps, was fined $7600 and had his vessel forfeited to the State.

A restaurant manager, who said he bought the redclaw for a staff party and didn’t intend to sell it, was fined $1000 after pleading guilty to one count of selling seafood without an authority.

The boat was crushed at it had been modified and was not suitable for sale.

The motors were removed and auctioned, with proceeds going back into supporting fisheries management, compliance and monitoring.