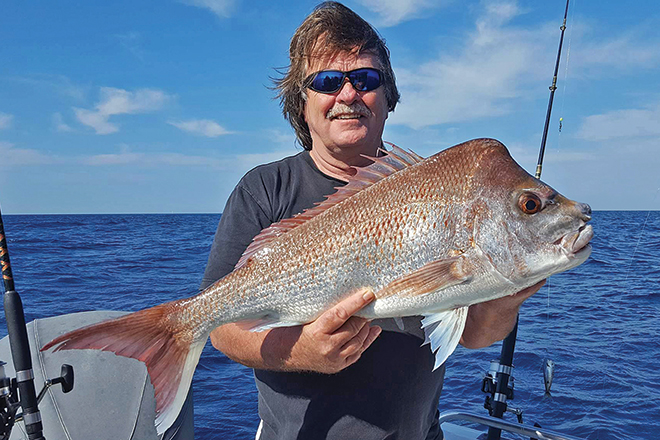 Sean Murry picked up this solid knobby on the reefs off Double Island Point. Photos: fishingnoosa.com.au

I REALLY enjoy December fishing on the Sunshine Coast, as the days get longer and make those early mornings and late afternoons and evenings very pleasant.

These are the best times to get out and wet a line, especially with this summer forecast to be the hottest yet. With the storm season already under way, the feisty mangrove jack are very active because a rise in barometric pressure turns on the fish. They say a drought on the land is a drought at sea.

Well thanks to massive falls in October, schools of baitfish have congregated close to the coast. Among these schools have been good numbers of tuna and spotty mackerel, which is great for small craft anglers wanting to tangle with large fish in their December fishing exploits. Close areas worth a try are Laguna Bay and Old Woman Island.

Catches of spanish mackerel are now in full flight, with quality fish taken on our famous Spanish Specials. This lure works perfectly with a slow troll and is designed to catch bigger fish lurking deeper in the water column. If you find the fish sitting closer to the surface, the crew members at Davo’s tackle shops have joined forces with Halco and come up with the exclusive colour 1250.

This colour is available in the Laser Pro 190 range in three different diving depths and has been specifically designed for the Sunshine Coast.
Popular spots for big spaniards include North Reef, Double Island Point, Coolum Reef and Mooloo-
laba 8 Mile.

If you love chasing reef fish, then Sunshine Reef is the pick, with everyone’s favourite the mighty coral trout on the chew. Good numbers of snapper and sweetlip have also been coming in. If fishing out of Mooloo-laba, pearlies have been found on Wide Caloundra in the deeper water of about 90m.
Closer in on the trawler wreck we have seen good size cobia coming over the gunwales, with drifted live baits producing the better fish.

The Barwon Banks have delivered redthroat emperor, snapper and moses perch. The redthroats are being taken before sunrise, so you’ve got to be there early. In close off Mooloolaba, Murphys Reef and the Outer Gneerings have produced spotted mackerel, cod, snapper, sweetlip and the odd coral trout. When chasing coral trout, target other species first because this entices the trout to feed, and then send down your live bait.

Mangrove jack are on the chew in the Noosa River and reacting well to soft vibes such as the Jackall Transam. A successful tactic for December fishing is to bounce these lures on top of rock bars in the areas between Johns Landing and the mouth of Lake Cootharaba. If you’re a trolling angler, try using the Lucky Craft Pointer upriver from Makepeace Island.

From Woods Bay to the Frying Pan and across the river to Munna Point we have seen quality whiting caught on sandworms and live yabbies.
In December fishing for whiting on surface lures will be fantastic fun, with popular models including the Bassday Sugapen and Ecogear PX55F thrown over the sand flats on the run-out tide proving deadly.

The trevally action starts from Woods Bay around the current line and over to Munna Bridge. These superb fighting fish can be taken on lures such as the Strada Viral and Jackson Risk Bait, with the honourable mention going to Entice Bungee Baits for the soft plastic fishers. This area is fishing well on the run-in tide and can also be fished with baits such as pipis, peeled prawns and whitebait.

Flathead are biting well and favouring the run-out along the sandbags to the river mouth and Lake Weyba. Lures such as the Lively Lures Mad Mullet 2.5” and bloodworm-coloured soft plastics will land you a trophy-sized fish. Drifting along the channel edges in this area with small pillies snooded on a couple of Mustad Penetrator hooks will also score you a feed.

The Maroochy River has stepped up, with mangrove jack taken under the motorway bridge and upriver in the deeper holes and Coolum Creek. Live bait has been best around the bridge and can be easily caught with a standard bottom pocket cast net. Top-performing lures include trolled Zerek 69mm Tango Shads and slow-rolled 4.5” Live Mullets.

Flathead have also been loving the livies, with the mouths of Petrie and Eudlo creeks the perfect spots. The Bli Bli islands and mud banks heading downriver are perfect for soft plastic fishers. Squidgy Pro Range Prawns slowly rolled down the bank while staying in contact with the bottom have secured the bigger fish.

The great eating and easily caught whiting have certainly responded well to the river run-off, with larger fish heading downriver due to lower salinity levels.
The channel edge adjacent to Picnic Point, the Black Banks and Chambers Island have been the hot spots. A good tip when chasing the bigger whiting during your December fishing trips is to use a Tru-Turn 063 hook in size 4 or 6 with a metre-long fluorocarbon trace with enough lead so the bait does not move.

Combine this with live yabbies, soldier crabs or worms on the hook and you’ll be eating one of the sweetest fish in the sea. Mud crabs are on the march, with catches reported all over the rivers, so stagger your pots in different depths and ensure they are baited well with fresh mullet.

The open beaches such as Teewah, Mudjimba and Peregian have all turned up good-sized whiting. The shallow water gutters on the last half of the run-out are proven performers for anglers using worms. Dart and the occasional tailor have been caught in the deeper higher water gutters, with pipis best for the dart while tailor have been taking strip baits after dark outside the river mouths.

In December fishing from the rocky headlands including Yaroomba, Point Arkwright and Double Island Point with flesh mullet on a Tru-Turn Strip Bait Rig will generate pan size squire and sweetlip. A friendly reminder with Christmas holidays approaching that our waterways will become very busy, so please remember to be patient at boat ramps and help people in distress.

It’s a great time now to check all your safety gear such as EPIRBs, flares and life jackets. Jump onto fishingnoosa.com.au for all the latest up-to-date information on what’s biting and bar crossing reports. Don’t forget to drop into Davo’s Tackle World in Noosa or Davo’s Northshore Bait & Tackle at Marcoola for good local advice and the best range of quality tackle on the Sunny Coast.

In addition, Davo’s Boating and Outdoors at Noosa has a massive range of kayaks and boating accessories on offer.