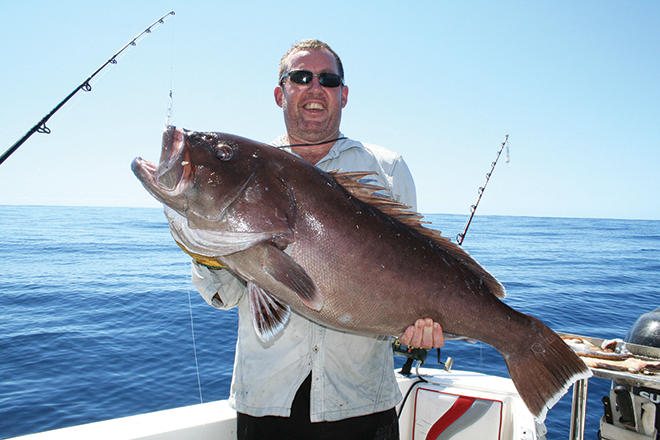 Tony held the author's second fish for a photo.

IT’S more deep dropping from me this month, but this time in southeast Queensland and fishing a lot further offshore than last month.

We had a perfect forecast for several days of light wind and low swell off Moreton Island, so the call was made to load up the electric reels and head wide.
While I fish out of Scarborough, the end location is sometimes 100km away and it is worth mentioning when planning a wide run that the wind prediction for the area you want to fish may be different to that of your launch location. This is particularly true for the Redcliffe and Moreton Bay ramps where an inshore wind can blow while it’s actually calmer further out.

Fuelled up and ready to roll, we dropped into the water and started to make our way across the bay at a good pace. I had left our run a little later than usual because it was a long weekend with perfect weather, and the amount of small boat traffic between Redcliffe and Bulwer on Moreton Island was the reason we waited for sunrise.

Wearing a tinnie was not part of the plan. We stopped at some pearl perch ledges on the way through the 90m contour to break up the trip because who doesn’t want a few pearlies in the box? After an hour and a couple of legal fish we continued east on a perfect ocean. With a small swell and no chop the trip to the wide grounds was quite easy. About 20 nautical miles east of Cape Moreton in 250m of water is where reef fishing ends and deep dropping starts. The first area was full of huge schools of bait that the blue marlin guys to the north of me would have liked to see.

The bait was holding from the bottom (260m) to about 200m. It was one of the biggest bait schools I have seen in that depth. We drifted through half a dozen times for a couple of dogfish and nothing else so headed south along a soft ridge line I had driven over and marked on a previous trip. As we searched south we came across a 10m gradual rise that maintained that depth for a distance before dropping off.

To me it looked like a gravel patch on mud or sand, but in 270m of water I could not make out anything except some life right on the bottom.

When you discover life over nondescript flat ground in this depth, fish it. Chances are it will not have seen much action from other fishos due to the lack of serious structure, and only anglers with good sounding gear who watch the screen intently will realise the potential.
On our first drop in near-zero current and wind, I had two 16/0 circle hooks on crimped 150lb droppers with big mullet fillets below a set of ganged 12/0 hooks running more mullet. Most fishos will run heavier gear than this for bar cod and I completely agree that this is light but I like to hedge my bets on a ruby or flame snapper or eastern nannygai when first dropping on a location.

I do carry 250lb and 400lb rigs for when things get a bit serious. Though while fishing for bar cod for the table you can generally get away with 200lb leaders and changing the rig to a single-hook setup. Tony was on board and got to the bottom first. He soon had the reel whirring and was on the way up with something of moderate size. I hit the bottom as this was happening and almost instantly got mauled by a big fish but failed to make the hook stick. So it was back to the bottom and bang, I was on tight.

It may have been the same big fish from the previous hit. The power in the bite and head turn of a bar cod is unmistakable once you know it. As soon as I had the electric reel in go mode I spun around and reached over the helm chair to hit ‘mark’ on the GPS. Never forget to mark a bite when fishing newfound ground in deep water.

I had lost a bit of line but by this stage I was back to even according to the counter on the reel. After a little longer I was comfortably winning the war as Tony lifted a big eastern nannygai over the edge and onto the ice. In the glassy-calm conditions the sight of a good bar cod rising from the depths amid a cloud of air bubbles was a welcome sight.

Along with the nannygai I had on the other hook it was a good start. We came around and lined up on the same line as the first drift. As we approached the mark I had entered, I got hammered on a whole 25cm mullet and instantly started giving up line on a heavy drag that I had cranked up after the first fish. Tony was also monstered and started losing line on a heavy drag.

Both fish were winning and well on the way to 300m from the boat after a 270m-deep bite. Tony lost a heap of weight off his line and the old Miya Epoch electric reel began reclaiming lost line, but I was still bent over and having to work the rod with the reel going just to lift the fish off the bottom. Some people might think that fishing deep with electric reels is lazy or boring.

Well if you have winches capable of 100kg-plus of lift it may well be boring, but when fishing with the smaller reels only capable of 30kg of lift and drag you really need to work the fish off the bottom because putting the rod in the holder and sitting back will result in burnt-out reels and no fish. Tony got his fish to the boat first and we found he had hooked a nannygai of about 2kg that had been eaten by a seriously big bar cod and then spat out.

This fish was busted up like it had been run through a garbage compactor, with bones sticking out through the flesh and big rip marks down both sides. Note to self: don’t let a bar cod bite me. My fish worked me hard for the first 100m off the bottom and then, as often happens, barotrauma set in and the fish was soon boatside for another bar cod into the box.

At this stage I had caught two bar cod and Tony had landed a bag of nannygai and the obligatory dogfish or four, so the next drift I packed up and let Tony have the deck. We loaded three whole mullet on the rig and sent them straight onto the mark on a short drift. Things didn’t happen quickly and we were well south of where we had hooked the previous fish when the 24kg stick buckled over and line started leaving the reel.

This was a stronger fish than before, and under heavy drag it ripped 50m of line off the reel and stuck hard to the bottom for at least 15 minutes while Tony worked as hard as he could to pump some line back on the reel. With 350m of braid out we started to win and gain line. This fish gave its all and hugged the bottom but once we got it 50m off the bottom it weakened and started rising quickly, which induced barotrauma and made the last 15 minutes of slow winding on the electric much easier.

A 20kg bar cod next to the boat after Tony’s long stint on the rod was a welcome sight for both of us. After a few photos it was into the ice. We had a look at the box and decided we would leave them biting because we didn’t need any more fish for the day. It was only 11am but we pointed the sharp end west and headed in. The trip home was glorious and I don’t think I touched the throttle from the continental shelf to Scarborough Marina.

Jason is a well-known and respected southeast Queensland angler with a wealth of fishing knowledge. He specialises in squid and deep-sea fishing and is full of helpful hints.
Previous Chasing Dolphinfish Around Cape Moreton
Next Zerek Surger Hard-body Lure