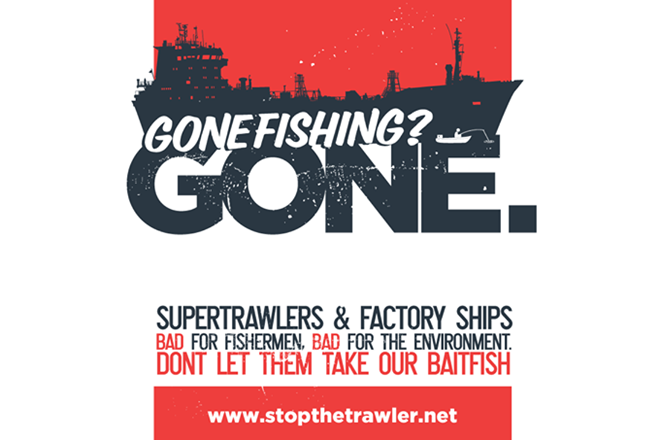 The NSW Fisheries Minister has called for for the Federal Government to review the management of the super trawler Geelong Star in consultation with rec fishers. This is a good start BUT if we don’t protect our Small Pelagic Fishery from all massive factory trawlers, the old adage of “gone fishing” might be gone. National Week of Action coming soon!

The monster trawler Geelong Star has been destroying our local baitfish and protected species for almost a year now. It’s heart breaking and infuriating for people who love our oceans and want to make sure there’s fish for the future. But in breaking news: NSW Primary Industries Minister, Niall Blair, has just come out demanding the Australian Government reviews its super trawler approval.[i] Our work is making a difference, and the more politicians we get to speak out in the lead up to the federal election, the better.
Here’s a wrap of everything you need to know about our fight to protect our oceans from monster trawlers, closing with some details on our exciting National Week of Action!

Nets of mass destruction
The monster trawler Geelong Star has taken thousands of tonnes of the baitfish that drive important game fishing and whale watching tourism on the NSW south coast. They’ve also killed at least 9 dolphins, 15 seals, 11 albatross, 23 sharks, and caught a whale shark – and they’re just the ones we know about……

Dodgy behaviour in the Senate Inquiry
We presented to the Senate Inquiry in April, demanding that the government end the secrecy and release the evidence they have of the monster trawlers damage to our oceans.[ii] Whale shark scandal continues
We’ve asked for the footage of the whale shark being caught and dragged on board the super trawler Geelong Star, but the government are using delay tactics. They’ve rejected all of our past Freedom of Information requests, and pushed out the date they need to respond to the latest request twice. But we’re not stopping until we get to the bottom of this scandal. We’ll keep you posted.

Super Trawler questioned by NSW Minister!
The NSW Minister for Primary Industries has come out calling for a federal review of the management of the super trawler in consultation with recreational fishers. This is great news! Our messages and actions are getting through to the people with power.
Join the National Week of Action!
To keep the pressure building on our MP’s we’re having a National Week of Action from 16-22 May.