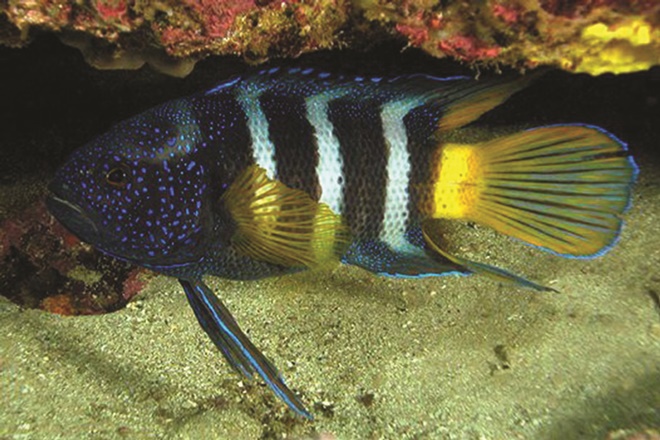 Devil in the deep blue sea a rare sight 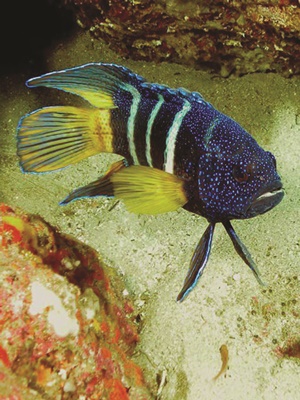 VIDEO footage of a rare, protected fish in water almost twice the depth it is thought to inhabit has raised questions about how marine life is responding to climate change and how much we really know about the deep ocean.

Marine biologists from the University of Wollongong have taken the first verifiable recording of a rare, protected fish in water almost twice the depth it is thought to inhabit and two kilometres further down the continental shelf than previously recorded. The finding of the eastern blue devil fish (paraplesiops bleekeri) well outside its published range raises questions about how some fish species are responding to climate change as well as the need for scientists to work more closely with fishers and citizen scientists to corroborate or rewrite what is known about fish that inhabit deepwater reefs.

Eastern blue devil fish are rare and endemic to coastal reefs along eastern Australia. Their bright colours and relatively small size (adults grow up to 40cm long) make them attractive to the aquarium industry and as such they have been protected under NSW Fisheries laws.

Using video cameras dropped on the ocean floor with bait attached – devices called baited remote underwater video stations – researchers from UOW, University of Sydney, University of New South Wales and the NSW Department of Primary Industries have been able to survey habitats that are too deep to dive and in any conditions. They have the added bonus of being able to observe for hours at a time without human interference.

PhD candidate Lachlan Fetterplace, from UOW’s School of Biological Sciences, said the rare sighting was part of footage that formed ‘failed’ samples of what was supposed to be surveys of sandy ocean floor habitat in a 75km stretch of NSW coastline between Jervis Bay and Bawley Point. The eastern blue devil fish was spotted at a depth of 51m and 2km further down the continental shelf slope than previously observed; well outside its published range of depths of less than 30m.

“We dropped the cameras onto what was thought to be a sandy bottom and instead found uncharted reef with overhangs and crevices,” Mr Fetterplace said. “Normally this footage would be stored on hard drives and left to gather dust at the back of a lab. Perhaps because the seascape was so interesting, we went through the entire hour-long video sample and there it was, the unmistakable electric blue colouring, white stripes, and shy emergence of an eastern blue devil fish from a crevice to investigate a baited camera.”

The researchers report in a paper published recently in the European Journal of Ecology they know of no historical records in Australian museums or databases of eastern blue devil fish from deeper than 30m. Commercial fishers are unlikely to come across them due to a combination of their protected status and the complex terrain they inhabit, which is avoided for fear of damaging nets. A confirmed capture from a depth of 48m on a charter fishing boat of an eastern blue devil occurred off the coast of Sydney in February 2018 and recreational fishers have reported on online fishing forums of accidentally catching eastern blue devils on reefs known to be in waters deeper than 40m.

“If the range of the eastern blue devil can be further corroborated down to at least 50m and potentially well beyond, this would significantly expand the known habitat of a rare and protected fish,” Mr Fetterplace said. “This knowledge can help give conservation measures for this species the greatest chance of success, while also benefitting the management of deeper offshore reefs.”

Mr Fetterplace said climate-driven range shifts have been documented globally and it is feasible that eastern blue devils and other reef fish may be shifting their range both in latitude and depth as they seek cooler water. But without further sampling of deeper reefs on the continental shelf, the extent and range of the deeper populations of eastern blue devil fish, and how they and other reef fish are being affected by climatic changes in an ocean warming hot spot, will remain largely unknown.

The paper also extends the depth range of several other species. Samples from 17 other locations turned up immaculate damsel, red morwong, mado, white-ear, silver sweep and crimson-banded wrasse in large numbers and well outside their published depth range.

“The knowledge fishers can provide is potentially significant in corroborating scientific observations and increasing sampling effort of rare species and deeper-water research will greatly benefit from collaborating with fishers and citizen science programs,” Mr Fetterplace said. “These sightings remind us yet again how little we know of the deeper oceans, and the dangers of restricting conservation and management efforts to well-studied shallow, coastal and relatively ‘accessible’ environments. Many other reef fish species most probably occur on deeper reefs in Australia and in coastal waters globally and we are simply not yet looking deep enough.”