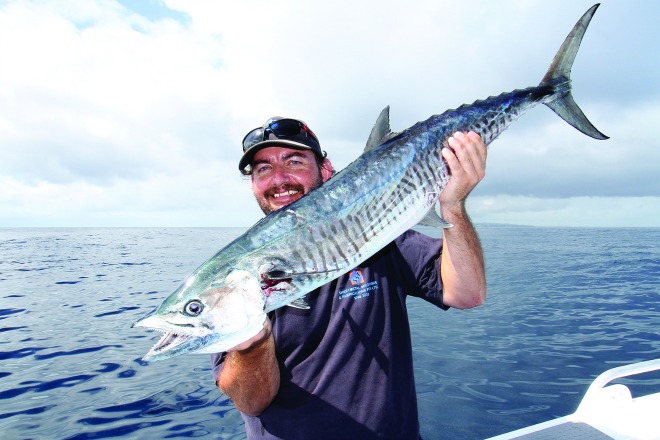 Kip Cavka with his first wahoo.

CYCLONES have stayed well clear of our coastline this year but we have certainly felt the after effects, with strong wind blasting our beaches for weeks at a time and limiting our opportunities to target offshore speedsters such as spanish mackerel and wahoo.

The associated big swells have also made our bar crossings a little more interesting, but regardless of the weather, the fish are still out there just waiting to strike.

Marlin have been a bit slow coming down from the north this year but plenty of mackerel and wahoo are eager to take just about anything. I would like to say our success this year has been due to our skill and knowledge, but realistically, you could just about troll an old sock and still come up with the goods.

I met Kip Cavka about two years ago while he was working for Origin Boats. Kip is one of the best welders I have ever met and what he doesn’t know about welding aluminium or stainless steel isn’t worth knowing. Though Kip feels very much at home when it comes to building boats, he didn’t have much experience chasing pelagics.

I had promised to take Kip out trolling several months ago, so recently when I saw a break in the weather I asked him if he was interested in a quick dash out to Hutchisons Shoal. It was still dark when we launched the boat at Spinnaker Sound Marina, so we just idled out towards the southern end of Bribie Island. It still amazes me how many small boats go fishing in pitch-black conditions without lights.

Let me try to explain why doing so is so dangerous. As I head out in the dark, I switch on my navigation lights in front of me and my stern light behind me. I also have a 12” GPS/sounder, two GMI gauges, an autopilot and a radio on my console, and even with their brightness turned down, I still find it quite difficult to see what is in front of me. Many times I have realised a boat was in front of me only because I felt its wake or I was just able to make out the very dim light emitted by the boat’s sounder.

In most cases the other boat hadn’t even realised I was there. If you happen to be the small boat out there fishing without lights, often you will not hear me approaching until it is almost too late. I usually see the occupants madly searching for a torch to shine towards me at the last minute, just as I’m about to cut their boat in two.

Luckily for these boaties I am extra careful and travel slowly until I am out of Pumicestone Passage. Anyway, after avoiding a couple of unlit boats, we headed out towards Cape Moreton. Comboyuro Point on Moreton Island was calm and almost glassy, so we didn’t even have to slow down.

I have always wanted to take a photo of the sun coming up behind the Cape Moreton lighthouse but every time I seem to reach the Cape just after first light and well before the sun reaches the horizon. I know spanish mackerel continue to hunt all night, but I always hope they will be looking for that tasty little lure just as the first rays of sunlight hit the water.

Well that is what happened on this day. We had only just dropped the lures into the water when the first spaniard hit the short corner. The line just kept on peeling off until suddenly there was nothing.

The fish had pulled the hook. It was a great start but no cigar. The boat hadn’t even slowed, so we just placed the lure back into the water and kept trolling.

In a matter of minutes the same lure went off again, but this time the fish wasn’t getting away. Kip jumped to his feet and kept the pressure on until I had cleared all the other lines. I bought a 200-litre Esky for mackerel and wahoo but even it was too short for the size of this fish.

In the distance I could see a small flock of birds diving into the water, so I slowly trolled north towards them. The Garmin sounder turned red and just as we drove over a large school of bait, two of the reels started screaming. I love the way that when a Shimano Tiagra goes off, the sound vibrates through the whole boat. Kip was definitely sitting in the right spot because that short corner went off again and kept going off for the rest of the day. We dropped one, hooked one, dropped one and hooked one, all on the same lure in about 20 seconds.

The mackerel were going crazy.

It was now just after 7am and we had caught our quota of mackerel, so it was time to try for a couple of wahoo. I normally try my secret wahoo spot that everybody seems to know about, but I didn’t even get close before all the rods went off. Sometimes it can be a pretty difficult decision to choose which rod to grab first. Two of the wahoo found their freedom and one was relocated into the bottom of the Esky, but I had grabbed a rod with something a little bigger attached.

I had a kilometre of line on the reel but I was starting to worry about losing it all, so we decided to give chase. There was no hurry, so Kip just kept the boat moving slowly forwards as I regained most of my line. The fish had gone deep and there was nothing I could do to bring it back up. I could feel its massive head shakes so knew it was angry.

The fight dragged on for about half an hour, and with three big fish in the Esky I wasn’t too worried about getting another fish in the boat, so moved the drag all the way to the sunset position. It doesn’t sound like much but 12kg of drag pressure for the next 15 minutes started to take its toll on my back, legs and definitely my arms. I decided to drive off the fish in the hope of planing it up to the surface, which worked for a while but as soon as we dragged the fish closer it forced its way back to the bottom. An hour had passed and every muscle in my body was aching when finally the fish started coming up towards the surface.

We looked over the side of the boat to see a massive shark on the end of my line. I am not sure if the boat was bigger than the shark, but I wasn’t going to measure it, so we locked the drag and watched it swim away with my brand-new lure.

We decided to do one more pass over the top of Hutchies to see if we could hook another wahoo. In hindsight we should have put only one lure out because the next few minutes turned into mayhem.

Rods, reels and lines were going everywhere. Needless to say we had caught enough fish and released almost as many during the day, so after clearing the mess we decided to tidy the boat and head for home.

It was a great experience for Kip and the stories of many lost and broken lures will last a lifetime, but I know it will only be another couple of weeks before I get the urge to head back to the Cape. So until then, may all your fish be hungry.

If there is one thing that Frank Oostenbroek (FrankO) is passionate about, it's fishing with soft plastics. Whether it is in fresh water, estuaries or out chasing marlin, FrankO has proven his ability to continually to catch the big fish. FrankO offers a variety of services including a fishing school, photography and electrical fit-outs on boats.
Previous Boomerang Tool Zinger Keeps Things Handy
Next Fishing Options at Boondooma and Bjelke-Petersen Dams