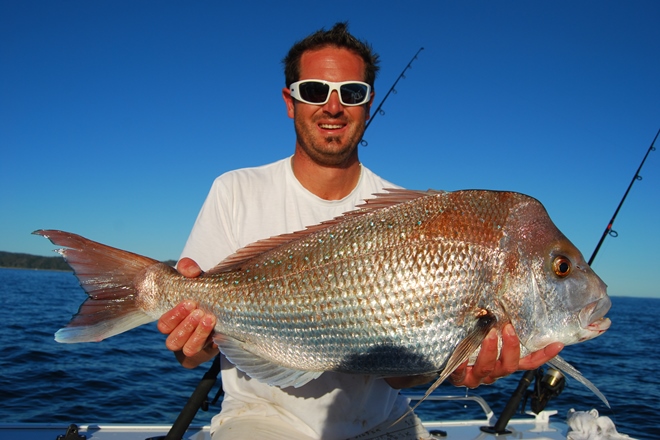 A quality snapper just prior to being released.

THE annual drop in the mercury is always an exciting time for me, as it is for most serious snapper anglers around the Brisbane area.

This is the time of year when large snapper schools move into Moreton Bay on their yearly breeding pilgrimage, offering small boat fishos a unique opportunity to tangle with some big reds in shallow water. Over the years I have noticed exceptional and less than exceptional snapper runs, and last year was just an OK one and didn’t really produce any monster fish. The average size of these breeding fish is 4-8kg, with the odd larger specimen tipping the scales to just under or over the magical 10kg mark.

I’ve noticed cycles of these good and bad snapper seasons over the years and from all indications this one should be a cracker because we are due for a big run of fish. At the time of writing, several fish to 7kg were being boated at popular locations inside the bay. The snapper season often starts in dribs and drabs like this, but as the temperatures drop considerably in June, the schools really start to condense on any ledge or reef structure that holds a large supply of food such as baitfish, squid, prawns or crabs. Once this occurs, catching large numbers of quality snapper becomes a simple process provided you are using the right baits in the right place at the right time.

Knowing where to be and when to be there is half the battle and discovering this information takes quite a lot of trial and error, which can be very frustrating at times. Even I sometimes draw a blank on these occasionally fussy feeders, but this just adds to the excitement of those successful trips where multiple big fish are captured. I recall several trips where double and triple hook-ups have been the order of the day, and often more rods are going off than there are anglers to grab them.

These days, most of the big snapper I catch are released in good health after a quick picture for the pages of BNB. This annual breeding process is vital to good numbers of fish continuing to venture into Moreton Bay, and over the past few seasons I have really got into catching and releasing these magnificent fish. In fact, all the pictures with this article are of fish that were subsequently released in order to maintain large numbers and promote the breeding process, which to the best of my knowledge occurs around the full moon in July.

Fresh seasonal baits are a very important part of catching large snapper on a regular basis, and you can go about collecting them in a number of ways. Obviously, the cheapest method is to head to the shipping channel markers and catch a tank full of slimy mackerel, scad, herring and any other small baitfish that will jump onto a bait jig. I have caught plenty of snapper on grinners, whiptails, goatfish, the list goes on, but the one consistent factor is that the baits are fresh. It is a very rare day indeed when I will buy a frozen block of pilchards for a session on snapper, and if you adhere to this one simple rule, your catch rate will improve dramatically.

Fish your chosen bait whole to handle being picked at by the smaller fish that abound around most of the shallow reef areas in Moreton Bay. I don’t often fish live baits for bay snapper, but these can be advantageous if the small pickers become a problem when using dead baits. Live baits will swim away from the small pickers and this leaves your bait in the water longer, which in turn gives it more chance of attracting a larger specimen.

The rig I use is very simple and the general rule is to employ as little hardware as possible, because the more equipment used, the greater the chance that fussy feeders will notice something is off and avoid the offering. I use a single Gamakatsu Octopus pattern hook (8/0-10/0) tied to 80cm of 40lb neutral-coloured monofilament leader, and then a swivel joins the leader to the main line coming off the reel. The sinker is captured between the hook and the swivel on the leader and this ensures you are always in touch with your bait and will feel even the slightest bump or touch.

Sinker size is very important when targeting larger snapper because they are most commonly found well up off the sea floor. This means our baits have to spend as much time in this part of the water column as possible, and the only way to achieve this is to use small ball sinkers. Generally speaking, the largest sinker I like to use is a 3 ball and I will just let more line off the reel to float the bait down to where the fish are sitting. Sinker size needs to be changed fairly regularly to cater for the changing tidal conditions, particularly around the full and new moon phases when a lot more run is present.

When baiting up, ensure you hide as much of the hook as possible in the bait to avoid the fish getting suspicious and ignoring the bait. I will write a more in-depth snapper article later in the season, but next month I will contribute an article on my recent trip to the Kimberley coast. Until then, tight lines and stay safe on the water.