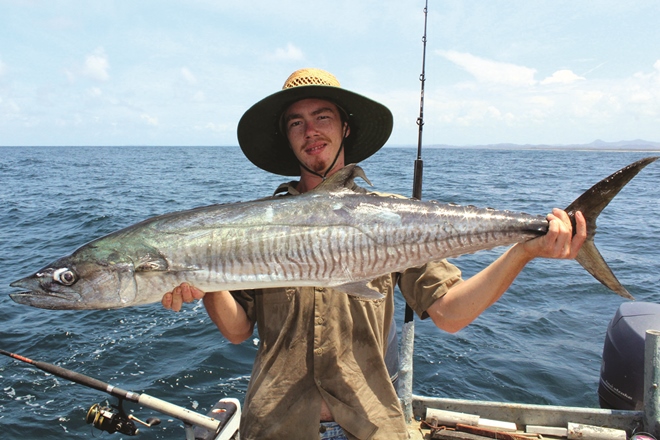 One of very few mackerel landed so far this season.

WELL the drought’s over on the Northern Rivers! Twenty-four inches of drought-breaking rain in four days will do that.

All those fish that were above Mullumbimby in the Brunswick River aren’t there anymore. We really needed a good flush of the system like this to get things moving both in the river and offshore. Offshore was stagnant, with cold water hugging the coast and relentless northerly wind.

Our mackerel season never even got started. My mates at Tweed Heads had an OK start but down here has been miserable. Lewan and I got out a few times and fluked three spanish one day. That got a few people excited and lots of boats headed out the next day and all scored a doughnut.

Subsequent trips were duds for me but Lewan snuck out one morning in his boat with a small break in the northerly. He didn’t muck around catching too much live bait, because he knew he didn’t have long to fish before the wind came up. As it turned out, he didn’t need long because he got a bite within 10 minutes. The fish nearly spooled him but after getting it under control a fairly lengthy fight ensued.

Getting the fish in the boat, Lewan sent me a picture saying it was a big unit of at least 25kg. I told him I’d meet him at the ramp with a set of scales and a camera. As soon as I saw the fish, I knew Lewan was being modest with 25kg. The big mackie spun the clock around to exactly 31kg. All Lewan had to say was he thought it felt heavy when he dragged it over the side. What a cracking fish to catch in the cold water!

If you’re interested, the whole fish was consumed by many parties and no ciguatera symptoms were reported by anyone. As a disclaimer, I am just reporting the facts, don’t take this as a go-ahead to eat fish with the risk of ciguatera.

With the drought-breaking rain event at the time of writing and still a few more days of rain and swell to come as well as a possible cyclone, the goal posts have moved. Despite Lewan’s big fish and a handful of other mackerel, it really was a dud start to the season.

No boats have been out for a couple of weeks now and by the time they do they will be dealing with dirty water on the close reefs for a while. I don’t mind this because at least the run of northerly wind and cold water has been broken. As the water on the close reefs improves, schools of slimy mackerel should move in and the mackerel will follow. Hopefully some wahoo turn up on Windarra Banks and give us a bit of excitement.

Aside from pelagics, Windarra could have a few kingfish and amberjack and don’t let the warm water stop you from snapper fishing because a few of them might be around too. I’ve heard a theory over the years that the best time to catch snapper and jewfish on the close reefs is after a big swell has stirred everything up. I’ve never had much luck like this and find it takes a few days for things to settle.

The bait leaves the reef in a big swell and takes a while to come back, as do the predators. Having said that, once things settle, definitely have a go for a jew or snapper in close.

In the rivers, it has been all about the jacks. Last month’s edition was full of big red fish and we’ve had a cracker season here too. This drought-breaking rain won’t change things too much, except they won’t be back up at Mullumbimby or Murwillumbah for a while.

Even now in the flood water plenty of jacks are being caught along the walls in the lower reaches of the Brunz. A lot of people think you need lures or live bait for jacks, but pilchards are catching the majority at the moment. When the water is dirty like now, the jacks hunt by scent, so pilchards and cut baits are best.

Flathead have been as rare as the proverbial rocking horse poo but who knows, after this fresh they might be around. Good trevally were in the river and are still there now but like the jacks, they are not spread out yet. On the high tide the trevally are hunting the lower reaches and judging by the splashes and the size of the fleeing mullet, I’d say some pretty decent ones are among them.

The fresh brings a lot of nutrients to the lower river and we thought we saw a shark in the harbour the other morning. The three of us standing on the jetty watched as a fin sliced through the water but then there was another one next to it and we realised we were watching the wing tips of a sizeable manta ray. It turned out two were in the harbour and they were big. I’ve seen eagle rays in the harbour most weeks through summer but mantas were a first. What a great sight!

So that about sums up the situation at present. In the river, chase jacks, trevally and a few jew for the sportfishos, and whiting and mud crabs for those after a feed.

Offshore, fingers crossed we get some sort of a pelagic season when we can access the reefs again.

For more tips on fishing after rain, click here!

Twenty-four inches of drought-breaking rain in four days will do that.