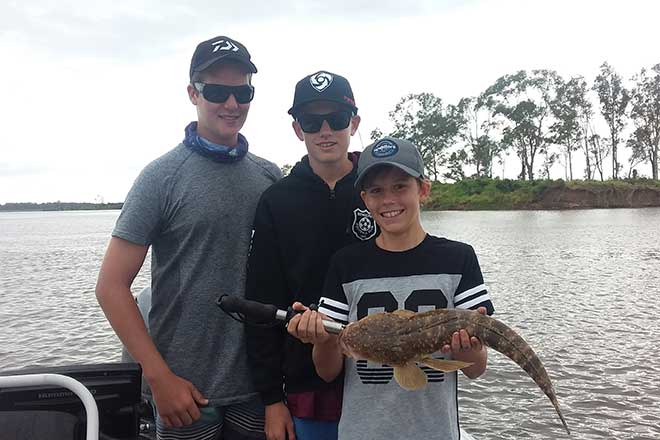 Cameron, Matthew and Alex with the nice 58cm flathead caught on a Gulp soft plastic in the Burnett River last weekend.

Early morning tops of the tides best for Bundy

The offshore fishing around the Bundaberg area will be limited this weekend. This is due to the recent south-easterly change, so any form of offshore fishing will be coastal and around the river mouths. The early morning tops of the tides will be best. Best tides for Bundy

There has been a few mackerel and tuna about, as well as a few grunter and grass sweetlip caught on the inshore reefs. We are also lucky that our rivers and creeks are clearing up nicely, and most systems are really starting to produce some quality fish.

Both Baffle Creek and the Kolan River have started to fire. Some nice mangrove jack have started to move back upstream with a few nice reports of some nice flathead, grunter and even a few jew being caught out of these systems. The Burnett River continues to fish really well with most of the better fishing being down around Fairymead and through to the Port. Some great grunter fishing has been going on with some big numbers being caught and quite a few quality sized fish to 60cm have been taken. There is also big numbers of bream being taken along the rock walls and plenty of sand whiting, flathead and sickle fish all being caught.

Rumour has it that a few mud crabs are on the move. They are a bit green at the moment but another week or so and the crabs should be a nice chocolate brown colour. The Elliott River is still a little brackish but there has been a few whiting and flathead caught down around the river mouth. Lake Gregory is fishing well for bass and with the recent stocking of saratoga by the Bundaberg Sport Fishing Club, this lake will be one of the hottest dams around.

Lake Monduran has been fishing well for barra. Most of the barra are in the 50cm to 80cm size and are heaps of fun to catch. They are schooled up, and catching five to ten barra in a session is not uncommon. Small lures are still the go with the Jackall Squirrels and small Rapala X-raps being the stand-out lures.