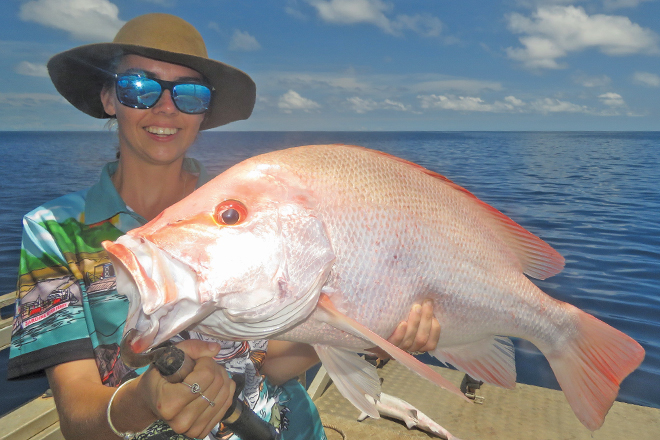 Leah muscled this stonker nannygai after getting comprehensively destroyed by her first bite, definitely a very quick learner.

You spend your whole life discovering new fishing gems, and living in the middle of the Cape provides plenty of options if you take the opportunity to explore that bit further. East coast reef

Even after 30 years up here, I’ve only scratched the surface – much of that due to the fact that many areas are still extremely difficult to access. East coast reef

There are three major limiting factors in the equation – the physical state of the roads, the effects of the wet season and access restrictions imposed by indigenous communities due to cultural concerns. East coast reef

The latter is often not well recognised by southern visitors due to them being unaware of the need to respect the wishes of this important part of the Cape’s population, more than 50 percent of its local inhabitants in fact.

That situation is often complicated by the lack of a comprehensive information source for such closures – that can happen due to the passing of traditional owners and be of indeterminate duration.

That said, the Cape is a long way from assorted activists who happen to be against four-wheel-drives, particularly those sporting bullbars and big wheels.

These misinformed and possibly misled people might take a totally different view if they arrived in Weipa or Bamaga during the wet season!

Negotiating the slippery and occasionally boggy dirt strips that usually start at the edge of town might be a little difficult, not to mention daunting, in their small suburbia friendly vehicle.

Even a minor excursion can leave your vehicle coated in thick red mud or even bogged.

Sounds very adventurous and potentially stressful, but to locals it’s part of the remote lifestyle.

So, driving for four to five hours over rough and bulldust-holed roads to reach a good fishing spot is not regarded as such a big deal here.

It’s a matter of planning and preparation.

And mobile coverage and roadhouses along the way are rare – so Maccas and KFC are the stuff of fantasy in the outback.

These days, what is locally known as the ‘east coast’ is becoming one of the popular destinations for Weipa fishers, particularly once the southeast trade winds of the dry season start to wane.

However, the window of opportunity is limited by the approach of the wet season and the oppressive humidity.

This inconvenience is a small price to pay for the exceptional fishing the area can provide from late October to early January.

I’ve been lucky enough to get over to Portland Roads and Chili Beach at this time of year for the past five seasons and have yet to be disappointed.

This time round, we experienced nearly eight days of almost flat calm weather, heading out to the outer Great Barrier Reef on multiple occasions, spending the balmy days diving and fishing in a wonderland that never ceases to surprise.

Then capping a perfect day by cooking up a big feed of freshly caught coral trout, washed down by a refreshing beverage.

Life doesn’t get much better!

For this sortie, we managed to find a couple of so-called ‘wonky holes’ not far off the coast on the edge of the shipping channel that stretches along the entire reef coast.

These structures are favourites of large-mouth nannygai or saddle tail sea perch, a close relative of the red emperor.

These beauties can pull, particularly when they average around 6-7kg.

To ensure numbers stay healthy, we usually called a halt at five or six, even though the bites were coming thick and fast.

In any case, our medium-sized icebox was chock-a-block as a result.

One meal we particularly enjoyed was grilling nanny and coral trout fish wings on the Weber!

The amount of succulent flesh on those often-wasted appendages made for an exceptional feast and can also be smoked to add further to the taste experience.

Enjoying such top quality freshly caught seafood was definitely a highlight of our east coast adventure.

Living in such a remote area of our vast country certainly has its rewards!