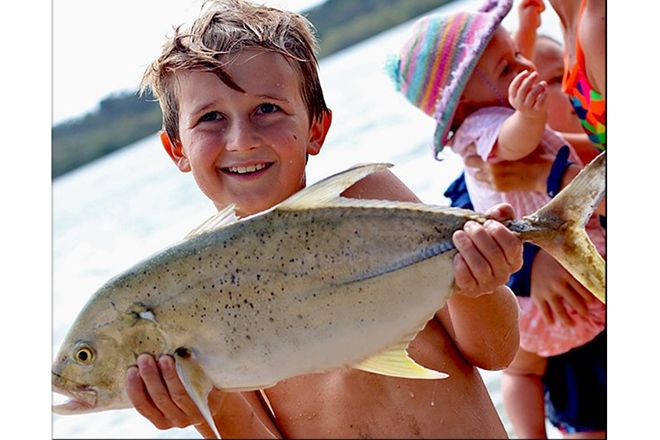 With some tough offshore conditions over the long weekend, plenty of Easter anglers opted for a fish in the river. Flathead have been in good numbers down towards river mouth with live baits working well, small poddy mullet and herring have been ideal and if you fish these baits on the outgoing tide you should find the bigger fish. Trolling hard bodies and fishing soft plastics in prawn profiles has also been an effective method. Whole pilchards and mullet strips fished on gang hooks have been the go to dead baits. Whiting have also been in good numbers on the flats down around the Frying pan and Dog Beach. For the bait angler, Instinct size 4 whiting hook and some Instinct red bead and tube, loaded with pealed prawns worms, squid tentacles or yabbies’ have been producing. Surface lures are also worth a go with some nice fish taken first thing in the morning. Small Strada Virals and Popoco poppers have been the most successful lures. Early morning and late afternoon Woods Bays, Munna Point and the Back of the Noosa Sound has been good for a variety of Trevally species. In amongst them are some big tailor with some fish up around the 70cm mark. Surface poppers like Chug bugs, Nomad chug Norris, Nomad dart wings and Jackson R.A Pops have been working well. Plastics have also been worth a go on a fairly rapid retrieve, give the 3’ Z-man Grubz a go.

On the offshore scene, things were a little tough for Easter anglers trying to make their way out with some pretty significant swells coming over the bar. For those that did find a window of opportunity they tended to stay close as winds tended to get up fairly early in the day. A few nice squire have starting to show on Sunshine Reef. Try floating pilchard baits in a well-maintained burley trail. Sweet lip, coral trout and pearl perch are also in goods numbers. Pilchard and squid baits on paternoster rigs are also working well. The bottom end of North Reef has also been good for coral trout, this great tasting fish have been taking a liking to live baits of yakkas and slimy mackerel rigged on a snelled Mustad hoodlum hooks fished hard to the bottom using quality leaders like Jinki or Black Magic. There have also been plenty of schools of tuna around Laguna Bay and Jew Sholes, they seem to be feeding on frogged mouthed pilchards so larger slugs and stickbaits have been successful, try Jackson Kaiken stickbaits, Nomad Madscads or big metal slugs cast at the schools feeding on top of the water. A fast-constant retrieve seem to be working best.

The beaches have also been a bit tough, with most angler getting up early to beat those annoying easterlies. Good gutters have been created by the bigger swells so there are plenty to choose from on the run up the Noosa North Shore. Plenty of whiting, dart, the odd tailor and bream have been on offer with small flesh baits, prawn and worms all perfect baits. With the early moon rise last weekend the big jew were pretty hard to come across but with the rough conditions these fish will still feed, good baits are accentual so give fresh mullet, fresh tailor, or large clumps of worms a go!

In the Fresh; recent run off have made the bass a little less aggressive in the way they feed but good fish are still being taken, in Lake McDonald some nice Saratoga have been taken on small poppers cast at snags in the early morning and late afternoon with some outstanding fish. Nice size bass are taking 3’ plastics in curly tail. These plastics worked deep have been successful in finding the school fish. In Lake Borumba the upper reaches seem to be where most of the fish have been hiding with some good saratoga taken around the timber, fishing small diving lures, Bassman spinnerbaits and Jackall Squirrels have also encouraged the bass out of there hidey holes.