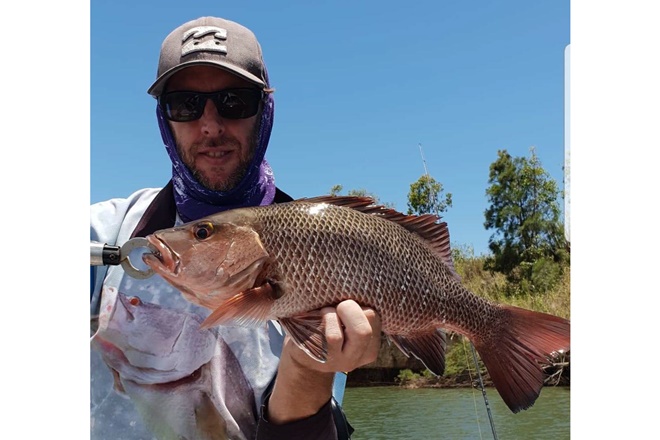 With some nice weather around the Bundaberg area earlier in the week, it was fantastic to see quite a few large boats gear up and head out to the reefs.  By all reports the anglers who put in the effort were well rewarded with some nice mixed bags of coral trout, red emperor, sweetlip, cod and parrot.

Once again, the inshore reefs off Bundaberg have been producing the goods this past week.  With the smaller tides the water was crystal clear and the mackerel were well and truly on the chew.  A few bigger spanish mackerel have also been caught on the shallow reefs off Bundaberg.  Fresh garfish and yellowtail rigged on gang hooks lightly weighted and floated out behind the boat is always a great option whilst bottom fishing.

The Burnett has been alive this past week!  The size of some of the mangrove jack caught out of the Burnett has been impressive.  Most of the rock walls and rock bars have had good populations of jack with anglers either live-baiting with poddy mullet, sprat or fresh prawns.  Casting soft plastics or vibes around the rocky structures has also been working well.  Flathead have also been caught in good numbers.  One of my favourite soft plastics for targeting both flathead and grunter has been the 4” Gulp Nemesis rigged n a ¼ ounce jighead and fished close to the bottom.

With both the Baffle and the Kolan systems fishing as good as they ever have over the past couple of weeks, it’s exciting to see so many mangrove jack, barramundi, flathead, bream, grunter and whiting being caught from both of these healthy estuaries.  The word is that there were a few prawns around as well as some nice muddies being caught this past week.

With a little bit of wind around this weekend, Lake Monduran would be a top option to wet a line.  There are so many sheltered, out of the wind bays all over the dam in which to fish for barramundi.  With the full moon next Wednesday night this weekend will be a prime time to target these fantastic sportfish.  One of the guides on the dam reported landing over 50 barramundi last weekend, with the biggest close to 80cm.  Most of these fish were caught using Jackall Squirrels and Lucky Craft Pointers.