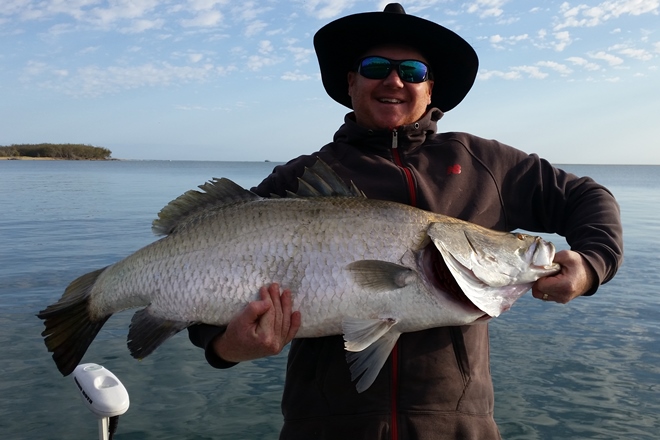 Matt Closter landed this barra in the Kolan River.

Estuaries and reefs firing off Bundaberg

We have been very lucky to see good weather around the Bundaberg area for the kids for the first week of the school holidays which will allow angers to target Bundaberg reefs.

The estuaries and the reefs have both performed well during this past week.

The Burnett River has continued to produce the goods with some nice bream, flathead, grunter, whiting and the odd mangrove jack keeping the youngsters amused.   Both soft plastics and baits have been working a treat, and some of the better fish have been caught along Kirby’s Wall, Fairymead Bend, Strathdees and through to the mouth.

A few anglers have been having some success in the Kolan River lately, with some nice barramundi being landed using 120mm Fangbaits and vibes.

Good numbers of school mackerel, queenfish, and mac and longtail tuna have been caught right along our coastline from Woodgate up to 1770.  Floating pilchards on gang hooks and casting metal lures and retrieving at high speed has been doing the damage.

By all reports Fraser Island is very busy but anglers are still managing to land some nice tailor, dart and the odd Spanish mackerel along the beaches of this fantastic island.

On the freshwater scene, Lake Wuruma, Cania and Callide are all fishing and red-clawing very well.

Some of the best bass anglers in the country fished a tournament at Lake Cania last weekend.  The size and the numbers of the bass were fantastic.  Bass up to 50cm were caught on many different techniques with small vibes, tail spinners, soft plastics and spinnerbaits all working well.

Tim Mulhall and I did a quick run up to Lake Monduran last Sunday morning.  The still conditions made locating the barra a little difficult but we still managed to land two barra and around fifteen catfish for the morning.  On this trip, the stand-out lure was the Lucky Craft 78XD Pointer.

It was awesome to see a young angler land a 106cm barra weighing 25kg with Lake Monduran Guidelines Fishing Charters earlier in the week, but most of the fish that we have encountered have been between 65-75cm, which are also fantastic fun to land on light gear.