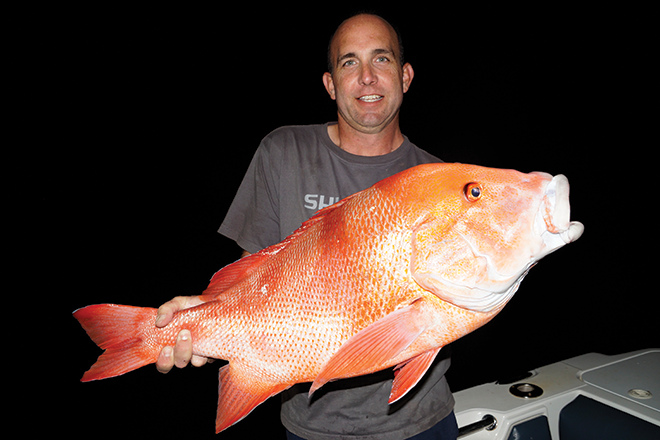 Andy Johns’s best red emperor of the trip was taken on a hussar fillet fed a fair way back from the boat.

Exploring north of Fitzroy Reef for red emperor and reefies

SNAPPER season has well and truly arrived, with the best fish at the time of writing spread along the eastern reef lines off Brisbane.

As you work inshore from the eastern edge there has been a noticeable increase in the number of snapper making up catches and this is only the early part of the season, so here’s hoping for a really good one considering the hoo-ha over snapper in recent years. By that, I refer to the reduction in the recreational bag limit and the limit of one fish over 70cm per person, while in the commercial sector anyone can rent some commercial symbols and plunder as many snapper as they can get their hands on while the species is at its most vulnerable.

We have noticed a visible increase in the number of yellow symbol carriers around our parts lately. Where do all those fish go? Snapper aren’t everyone’s favourite but they make up the bulk of the catch at this time of year and fish over 70cm are becoming less common for the average punter who fishes occasionally, which is why I’m happy to raise issues of poor management in a public forum.

The good news is many fish are better to eat than snapper and plenty of my favourite, pearl perch, have been on the wider reef lines and ledges as you head inshore. Parrot (venus tuskfish) have been firing particularly well lately, so good fishing opportunities have arisen for those who like to mix up their bag of fish each trip. Working any of the reef lines out to 70m from Point Lookout to the Cathedrals has been a great way to focus on the parrot.

Recently I’ve had the bug to do a bit more exploring along the reefs north of Fitzroy Reef and again used Turkey Beach as the shore access point due to its all-tide accessibility. Getting the right window in the weather is critical to the success of these trips.

This time it was another impromptu set of phone calls and off we went. Russell Goeldner and Andy Johns were my fishing buddies on this trip. We’ve enjoyed a lot of good trips in the past and I had made big fish promises to them following a very eventful and near-disastrous long-range charter they did out of Airlie Beach last year.

The pressure was on to deliver, as both the guys had never fished the Capricorn/Bunker Group before and were really keen to experience the good fishing I’ve talked up on the central Queensland reefs. On this trip, we started east of Sykes Reef and worked our way up towards North Reef.

The first day saw a slow start in close and because we were fishing after the new moon we expected we would have to work a bit harder than normal for the fish. Going deeper found us amongst pretty good action. We immediately set high standards of minimum sizes because you can catch a lot of fish in a short time in this area, so adopted the attitude of less fish for better quality.

Schools of hussar were everywhere, though we only kept a small number of the largest ones, and they do make a fabulous large flesh bait. Late in the day and after moving around several times, we came across a hot patch of fish that included maori cod, redthroat emperor and goldband snapper.

While all those species put a very decent bend in the rod and are great table food, we wanted to test some snapper theories before dark. The Hole, as I call the spot, had plenty of fish on it but they were pretty lethargic and we were satisfied with four good snapper with no shark problems.

In near-glassy conditions, we anchored after sunset in the open in about 60m of water and did our fish count, end of day jobs and grilled fresh fillets for dinner. A strong cross current was running where we anchored and a bit of lead was required to hold bottom.

Andy had the most fun when his rod started bucking away quite strongly and he brought aboard our biggest red emperor of the trip. It was his biggest to date but that fish was a loner, so after throwing back smaller fish it was time for a good night’s sleep.

After sunrise, we headed east and checked out another couple of snapper spots but they were patchy, so instead we settled for cracking parrot, redthroat and Andy nailed another red emperor, this time our deepest to date, in 90m of water. With plenty of spare fuel and in glassy conditions, we decided to move on, zig-zagging our way along and heading in a generally northwest direction while running over a fair bit of hard bottom.

After quite a few kilometres and several drops along the way, we found a really hot bite. The first fish was one of our best redthroat for the trip and we were putting together a nice mixed bag. Then the pearl perch started coming on with each drift.

With a dozen big pearlies in the box, we were happy to move on and check out interesting contour lines on the electronic chart.


We picked up great shows on the sounder and really craggy country to work over, but with time marching on and excellent fish in the box, the call was made to head towards home and fish a few more locations along the way.
The fish cleaning is always a big task and a couple of big buckets of salt water helps keep the fillets in good shape. Russell’s Cryovac machine got a big workout and we have been enjoying the benefits immensely.

For the record, Russell and Andy rated this trip an all-time high and have dropped all the hints for a repeat some time down the track.

When I got home, ‘King’ George had returned from holidays and was champing at the bit too. It was fun teasing him that he has some competition from Russell and Andy, but King knows his spot on the boat is always safe.

Bill has been spearfishing, fishing and surfing for all his adult life and now runs a business specialising in teaching people how to cross coastal bars and fish offshore. He also runs charters for people who fish for the right reasons and whose company Bill thinks he will enjoy. He’s been running his bar crossing business successfully since 1996 and hopes to continue doing so for years to come as he grows old disgracefully.
Previous Houseboat customers reporting good catches
Next Explore new possibilities in a Quintrex Freestyler