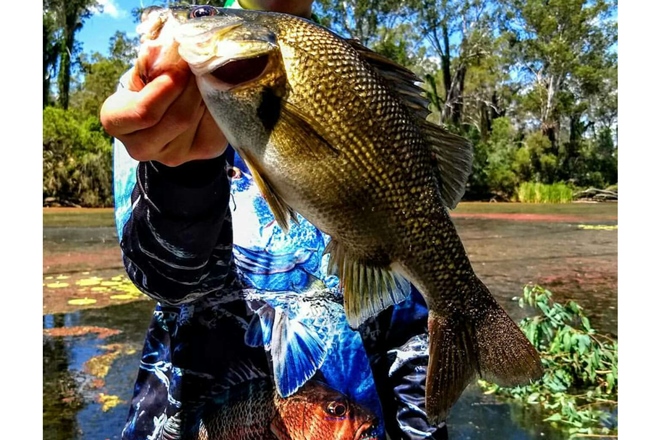 Looking into the weekend’s forecast for the Bundaberg area, it is not looking too flash due to a strong south-easterly wind predicted.  Luckily, last weekend was a cracker and a lot of boats headed offshore and enjoyed cracking catches.

There were some fantastic catches reported.  Red emperor, coral trout and some monster sweetlip were all caught.  There was also a good number of cobia and Spanish mackerel landed.  Also, earlier in the week the inshore reefs fired with grunter, snapper and a few jew all being caught.

Now, however, it will be back up the creeks and rivers due to the latest blow coming through.

Both Baffle Creek and the Kolan River cleared a bit on the last set of tides, pushing a few grunter and bream back into the mouths of these rivers.  A few more tides to push some more salt back in should get the mangrove jacks on the move.

The mouth of the Burnett River has also sprung to life after the fresh.  There is heaps of bream along the rock walls, with some big grunter and some quality flathead further upstream, and some three-tooth jew and a few silver jew have been caught at the mouth of Rubyanna Creek.

The Town Reach has also produced a few bream mainly on the tops of the tides.

The Elliott River and Coonarr Beach have both been fishing well also, with good numbers of flathead, whiting and dart.  Again, making tides have been the best.

Lake Monduran has produced a few barra this past week.  Most have come from up the back of the dam.  Barra from 50cm to 75cm have been caught and at this size they put up a great fight and are well worth catching.  Jackall Squirrels and Lucky Craft Pointers have been the go-to lures.

Lake Gregory has also fired up for bass.  Surface poppers early morning have been working a treat, and as the sun gets higher and the bass move off the edges, it is time to target them with Spinnerbaits and Jackall TN60 Vibes.