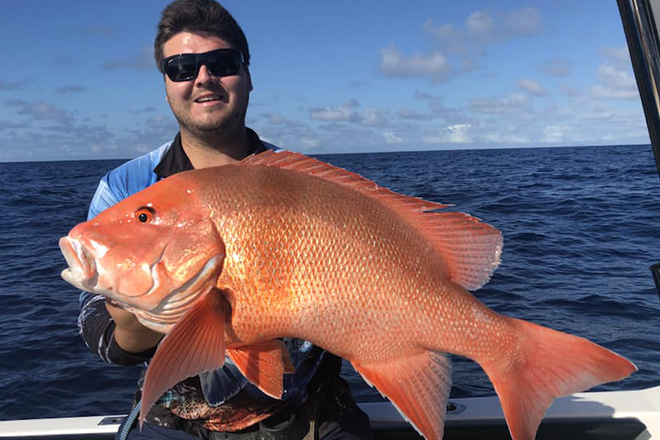 Pierce Jeffrey with the red emperor he caught off Bundaberg last weekend.

Looking into the weekend’s forecast, things are looking pretty good but as always, keep an eye on up-to-date forecasts before heading out as our weather can change overnight. As for the fishing, this past week has seen some great weather and some fantastic fishing to go with it. The gutters have been fishing well for grass sweetlip, red jew, parrot and an odd big coral trout. A lot of the shoals out to the islands have produced some big reds, maori cod, red throats, coral trout and some big tusk fish. There has also been plenty of Spanish mackerel, cobia, big tuna and small black marlin about to keep us entertained.

With the recent good weather, the smaller boats have had a shot at getting out, with the reefs such as the Two Mile, Ryans and the Cochrane Artificial Reef all fishing well. Plenty of big grunter, red jew, snapper and grass sweetlip have all been caught. These inshore areas have been holding a good number of school mackerel, so either float-lining a pilchard or high-speed spinning with metal slugs and spoons is the way to catch a feed of schoolies.

The upper reaches of the Burnett have started to clean up a bit after the recent rains, making it fishable again. These areas have seen plenty of large whiting and sicklefish on the sand flats, and plenty of flathead and grunter in the channel drop-offs. The rock walls in the river are still producing plenty of big bream and a few mangrove jack. The cleaner water down around the mouth has produced a few school mackerel on the tops of the tides.

There is plenty of whiting about in the Elliott, and with the full moon about they should be chewing their heads off! There are a few jacks and barra at Sharks Nest and a few cod and grunter on the rock bars further upstream.

Both the Baffle and the Kolan systems have cleaned up well from the recent rains and the weed has moved on. There is plenty of flathead about the mouths as well as plenty of whiting and bream around the sand drop-offs. Further upstream there is a few mangrove jacks and an odd barra getting about, with live-baiting working best.

Lake Monduran really turned it on for the Monduran Family Fishing Classic last weekend, with over forty barra weighed in. The barra have continued to chew this week, with plenty of barra to 80cm being caught. Most of the barra have come from Bird Bay and up into the north arm of section “B”. Most of them have been caught on 70mm to 100mm diving hard body lures and 4 inch to 6 inch soft plastics. The stand-out hard body is the new Jackson Divitis Minnow.