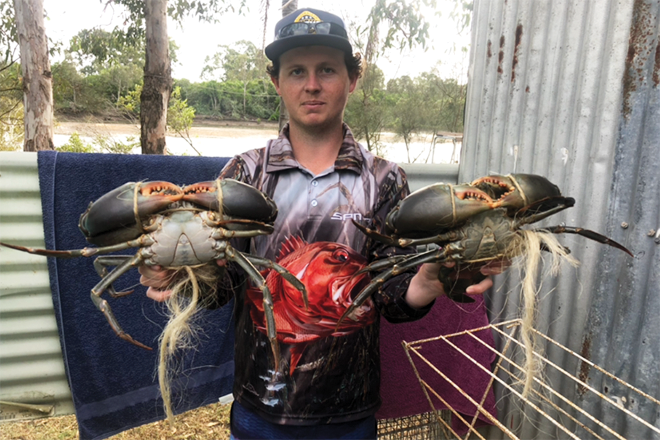 Mitch Beyer with a couple of mud crabs he caught over the long weekend.

BUNDABERG OFFSHORE
There were a few fantastic fishing days around the Bundaberg area late last week. The big boats that put in the effort were rewarded with some massive grass sweetlip, maori cod, coral trout and parrot. Most of the inshore reefs also produced the goods, and with the first cool change predicted for this weekend, it should fire up a few snapper and grunter along our coastline.

BAFFLE CREEK AND THE KOLAN RIVER
If the cool westerlies are blowing too much to head offshore, there has been some great fishing in both the Baffle and the Kolan over the past week. The bream should really fire up this weekend around the rock bars and snags. Rumour has it that there are a few mud crabs, blue salmon, flathead and nice grunter being caught and the first hour of the run-in tide seems to be the best.

BURNETT RIVER
It was awesome to see so many boats on the Burnett last weekend. In the Town Reach, there were some massive flathead, big bream, blue salmon and some cracker summer whiting caught up around the Tallon Bridge. The North Wall and Kirby’s Wall will be worth fishing with either soft plastics or fresh baits. The size and quality of the bream already being caught is outstanding, so let’s hope this continues.

LAKE GREGORY
With this cooler weather, it won’t be long before we see the Australian bass starting to school up in the deeper parts of the lake. This is generally a magic time to fish this top little impoundment and the bass can be caught on many different techniques from ice jigs, soft plastics, tailspinners and spinnerbaits.

LAKE AWOONGA
The fishing at Lake Awoonga over the past few weeks has been fantastic. Some anglers have been hooking up to twenty barra between 60cm and 85cm for the morning. The hot technique has been locating the schools of barra on quality side-imaging sounder units, then casting or jigging soft plastic vibes through the schools. Casting suspending hard body lures at the tree tops in up to eight metres of water has also been working well.

LAKE MONDURAN
The Lake Monduran Holiday Park and the Sponsor a Barra group held their second information evening at the camp ground last Saturday night. Once again, the evening was a huge success with around eighty anglers enjoying a top night. On Sunday morning quite a few people took advantage of the tag-along tours showing anglers the prime areas to hook these fantastic sportsfish, and with at least five people hooking and landing Monduran barra during the weekend, there were smiles all around the campground.