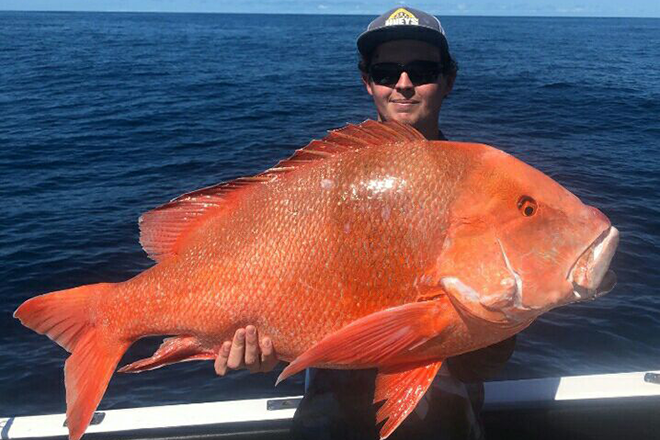 BUNDABERG OFFSHORE
With the local weather forecast for the Bundaberg area changing daily, it will pay to keep an eye on up-to-date forecasts as our weather can change at any time. If the forecast becomes as good as last weekend, it will be a cracker! Some of the fish caught last weekend during the good weather was nothing short of outstanding. A lot of the gutters produced some quality grass sweetlip, cod, tusk fish and some cracker snapper. The outer islands and atolls produced some monster coral trout, red emperor, tusk fish and job fish, and some big hussar were also caught, so fingers crossed for this weekend.

INSHORE REEFS
All the inshore areas such as Ryan’s, the Two-Mile and the Cochrane Artificial Reef have been fishing well, with plenty of snapper, grunter and school mackerel all being caught. Float-lining lightly weighted pilchards back to the bottom has been the way to catch the snapper and school mackerel, or high-speed spinning metal lures such as the ever-popular Flasha spoons has been another deadly method to catch the mackerel.

THE BURNETT RIVER
The Burnett continues to produce well, considering the fishing pressure it gets, and there are still good numbers of bream along the rock wall down towards the mouth. Some good size cod and jacks have been caught by trolling deep diving lures along the rock walls also. Further upstream on the sand flats and drop-offs there are good numbers of sand whiting, flathead and a mix of three-tooth jew. The Town Reach is still producing a few fish with some good blue salmon being caught as well as a few queenfish and trevally. The sand flats up the very top of the river have also been producing a good number of whiting, bream and sickle fish, all on the last of the run-out tide.

ELLIOTT RIVER
Now things have warmed up, the Elliott is worth a shot at chasing some mangrove jacks. Targeting the deeper holes or snags with some good quality live baits such as poddy mullet, sprat or prawns is one way to catch a jack or using soft plastic lures and soft vibes are other ways if you’re a lure junkie. Down at the mouth, there is still a few flathead, whiting and dart to keep you entertained.

BAFFLE CREEK AND THE KOLAN RIVER
With water temperatures well and truly on the rise it’s mangrove jack time, and the past week has seen some cracking jacks caught. Both the Baffle and Kolan systems have produced jacks to 50cm. Most of the bigger ones have been caught on paddle tail soft plastics or soft vibes. There has also been plenty of other species about with grunter, flathead, whiting and a good number of blue salmon being caught. Most fish have been caught on the run-out tide fishing the sand drop-offs or the edges of the main channels.

LAKE MONDURAN
Monduran has really turned it on this week with some great numbers of barra being caught. The main reason for this has been the run of constant northerly winds as well as the lead-up to the full moon. These are two things barra love. The best session I have heard of was a catch by two anglers of sixteen barra up to 80cm. Plenty of others had catches of two to five barra per session. So if this warm weather continues, we will see plenty more barra being caught over the coming weeks. Small lures are still the best way to target them, with the trusty Jackall Squirrel being a hot favourite hard body lure or a 4 inch Zman Swimmerz in a soft plastic. Please remember your Stock Impoundment Permit if you plan on fishing Lake Monduran. They can be purchased on line at https://www.qld.gov.au/recreation/activities/boating-fishing/rec-fishing/dams

Till next time,
Tim Mulhall