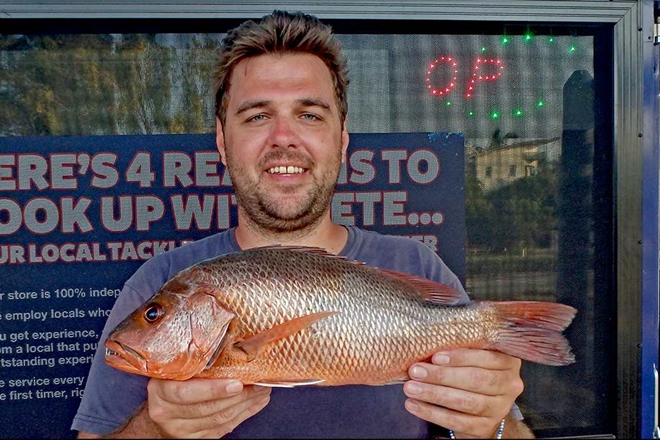 Well it’s finally started and pelagic season is here! With small numbers of spotty mackerel, spanish and mixed tuna species in the bay all you need now is to pick a time between the winds to go chase these speedsters. They are hard to catch, however the local Kayak crew have been picking up some good fish along the halls reef stretch on bigger slow trolled dead baits like garfish. For the boat anglers smaller Nomad DTX and Halco Laser pro’s are best deployed while the bait is small.

Most of the offshore action has been focused on DI and quite rightly so with some very good fish boated on live and dead bait. We have seen big reds, various other reef fish including nannygai, gold banned snapper, pearl perch, tuskies, tuna and cobia to name a few.  The currents have been light and with the northerly winds bringing the boats home it has been a great day for many.

In closer around Sunshine smaller reef fish prevail but the chance of finding the early season pelagics is a high possibility as they follow the bait with the tide. The Noosa Bar has a more defined channel so for those making the trip you should find things far easier than previous weeks. Be sure to be compliant with all safety gear and check out the wide range available in Davos Boating if you need a new pack of flairs or V-sheet.

Off the beaches the usual string of smaller dart, bream and smaller whiting continues to keep younger anglers happy. Off the headlands and rocks there have been a few jewies and smaller reef fish like sweetlip getting caught on plastics. Always keep polaroid glasses on and carry a heavy slug to cast out far as tuna and mackerel often come in close and within casting range. This is sight casting at its best.

The river has seen the post new bite slow a little but it is now coming back with a mixed bag of golden trevally, GT and bigeye trevally. These fish love a slow moving soft plastic or shallow diving jerk bait like a Zerek Tango shad flicked around rocks or along the jetties. If after flatties then the lower estuary drop offs where the new channel has opened up is looking great. Around the river mouth rocks and the deep holes in this area could yield other species like big bream and a few whiting. Upriver the salinity content is pretty much the same as the mouth so you never really know what to expect. Try to fish first and last light and find the bait and you should soon find mangrove jack and trevally. These fish are more likely to be found at night using bigger paddle tail soft plastics, soft vibes like the Zerek fish trap and of course live bait. Using 20-30lb leaders is a lot easier in low light as fish aren’t as line shy and you’ll find mangrove jack love to hit like freight trains.

The freshwater has seen some nice smaller bass under 40cm coming from Lake Macdonald on vibes and smaller surface lures. Much like the river the first and light has been the best time as the winds are often up during the day not to mention the temperature! In Borumba much like Lake MacDonald smaller bass feature with the odd smaller saratoga too. Yellow belly are still hitting deep diving lures like the RMG poltergeist on the troll. As always navigate with care as the levels are at 76% and roughly 2 meters lower than usual.