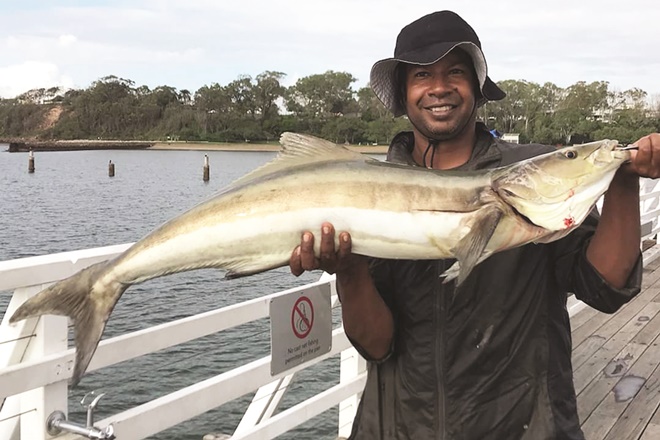 WE have seen a few good weather windows over the past month and hopefully June will prove to be a cracker and we can all get out there and grab a feed.

I have been getting around the Moreton Bay area and have received encouraging reports as well. Everything is pointing towards a good season for tailor, whiting, flathead and bream for the Moreton Bay fishos. A lot of sand has been moving around in the bay and out wide. Don’t be surprised if a few of your secret spots really have become ‘secret’! The upside is this sand movement will uncover other spots for you to explore and hopefully give you a chance to add a few new marks for filling the Esky.

During early May we saw decent numbers of winter whiting around the Caboolture River area and they have been of a reasonable size too. The traditional Nudgee Beach area was a bit slow to kick into gear, but numbers and size are increasing here as well. Woody Point Jetty and Shorncliffe Pier are favoured spots for gar and whiting fishers. Good numbers are generally taken while the waters are calm and cool.

A safety point here for the kids and those new to the sport is to be aware ‘happy moments’ are commonly encountered by gar fishos. The person who gave them the name happy moments really has some explaining to do, as there is nothing happy about getting stung by one of these fish. Take it from someone with first-hand experience!

If you are new to fishing, cut your line and sacrifice a hook if you pull one up. It’s much better than hours of pain! If you are unfortunate enough to be stung, hot water quickly becomes your friend. While it will not completely relieve the pain, it will take some of it away. And if you are really concerned, seek professional medical help.

If you are not sure what happy moments, stonefish and blue-ringed octopus look like, drop into Tackle Land Sandgate and check out the ‘No Touch’ tanks where you can see the live ones.

While talking about the nasties, it is a good time to remind people about stonefish. These fish blend in so well that you really don’t have much of a chance to avoid them. One of the best solutions is to always have solid footwear on while around boat ramps and rocky areas near beaches and jetties. If you have the misfortune to step on or touch one, get yourself to hospital right away because the pain very quickly becomes unbearable.

Here is a small extract from ‘Medscape’ for the treatment of stonefish stings: “Prehospital care should address recognition of the injury as a potential envenomation, gentle removal of visible spines, direct pressure to control bleeding, administration of analgesia and transport for definitive medical evaluation. Recognition of serious systemic symptoms and prompt institution of appropriate life-saving procedures, such as cardiopulmonary resuscitation and treatment for anaphylaxis, should be paramount in the prehospital care setting.” The photo of the two feet shows the swelling one week after standing on a stonefish at a boat ramp!

Now for a few of the locals and their stories.

Dave Forsythe was scouting out a few spots and ended up at Toorbul. Before long he had a 69cm flathead in the bag. Dave was fishing the flats using a bit of mullet when the bruiser decided she was going to give Dave a run for his money. Well done Dave, great photo and flathead.

Zac is a very active young fisho who had told his dad Michael: “All I want to do this year is fish!” Well you cannot get any more determined than young Zac! Zac and his dad are best fishing buddies and Zac is doing his best to put a feed on the table every trip. The nice snapper pictured is a great way to warm into the challenge. Though Michael owns the boat, Zac is the skipper and he is going to be one to watch over the next few years.

Tyler has been a junior staff member at Tackle Land for a while now and he brings so much passion for the sport. If he is not doing homework, he is playing sport, but he always wants to be fishing! Tyler puts in a lot of time around the Redcliffe to Shorncliffe area and anywhere else he can con Mum and Dad’s taxi to go.

Tyler and I have been getting absolutely bricked by big fish under the Shorncliffe Pier lately. A lot of tackle has been lost and frustration has set in a few times, but this just strengthens the determination to find out what is down there. Well Tyler may have solved part of the mystery when he landed the awesome grunter pictured. It could well be one of the bruisers, but I think there is more to the story.

I picked up a few hardyheads and went for a flick about a third of the way out on the Shorncliffe Pier. I dropped one under the pier on a Mustad size 2 Bronze Kirby and 00 ball sinker, and in less than a minute I was trying to work out how to get a 52cm flathead onto the pier. Luck was with me and I was able to lift the fish and grab a photo before releasing it.

Just a follow-up on the 103cm cobia Christopher caught on the Shorncliffe Pier (pictured in April). Well he doubled down a couple of weeks later with one measuring 110cm.

It is all happening in our awesome Moreton Bay and we’ve got plenty more stories to come!

Previous Black market fishing could land you in jail
Next From the burbs to the bay: GPS tracking reveals how litter travels