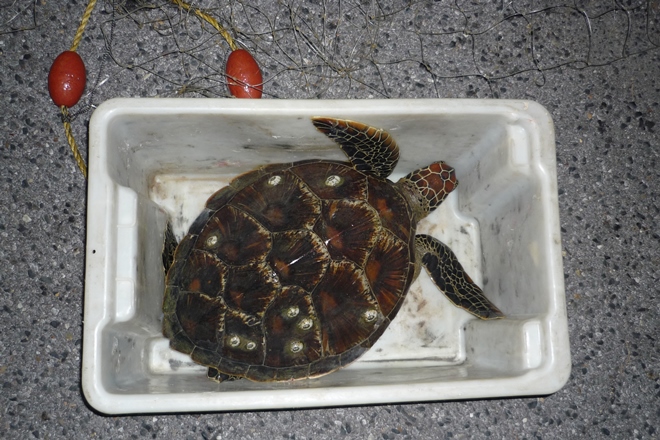 One lucky turtle. Photo: Department of Agriculture and Fisheries

TWO commercial fishers were found guilty in the Gladstone Magistrates’ Court for netting offences in the Port of Gladstone Rodds Bay Dugong Protection Area and were collectively fined close to $10,000.

Queensland Boating and Fisheries Patrol investigator for Central Queensland Deryk Smith said in April 2016, QBFP officers intercepted the fishers as they were pulling up their commercial fishing boat at the Gladstone Yacht Club boat ramp. “The officers found evidence of nets having been set in the DPA, including information on a chartplotter,” Mr Smith said.

“The officers instructed the fishers not to relaunch, or go anywhere near the locations identified on the plotter. Despite this, QBFP officers found evidence that the fishers had defied these instructions by returning to the water and pulling up or tampering with nets. Failing to comply with this lawful direction led to charges including obstruction and attempting to conceal unlawful behaviour.”

QBFP officers found unmarked and unlit nets, including one net that looked as though its anchor rope had just been cut. Officers also observed the defendants’ boat leaving one area at high speed. QBFP officers found a quantity of barramundi, sharks and one turtle, all of which were released alive. One of the men received a $6000 fine, with no conviction recorded. The second man received a $3500 fine, with no conviction recorded.

Although commercial fishers can use nets within the DPA, there is an increased level of regulatory requirements, including number and lengths of nets and attendance provisions. The Queensland Recreational Boating and Fishing Guide provides a comprehensive guide of boating and fishing rules and responsibilities, and is available at fisheries.qld.gov.au