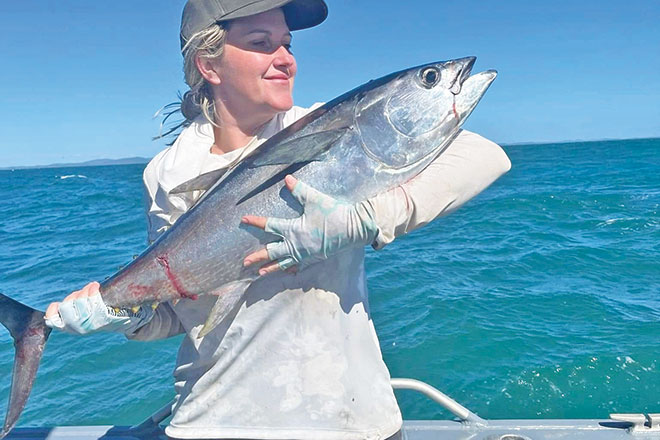 With the cooler months upon us, it’s time to dust off the beanies and jumpers because Moreton Bay can get quite cold early in the morning and evening. Fishing Moreton Bay in winter

Fish species go through some changes in the bay during winter, with snapper stocks increasing and larger fish up for grabs. Fishing Moreton Bay in winter

Offshore species enter the bay and you can usually tell the difference as offshore snapper having brighter colours compared to the resident bay snapper.

Early morning even before the sun rises over Stradbroke Island is the time to hit the bay and again when the sun starts setting.

During winter, we usually have better weather conditions and the northeasterly wind is less prevalent.

Places to target winter snapper are the usual haunts around the bay islands, starting with Mud Island’s eastern contours and in close in the evening.

If fishing an evening tide, it’s best to get in early and set up for fishing into the evening – the same applies to fishing an early morning tide – and getting a berley trail going will also help.

When fishing for snapper, it’s a good idea to have a floating rig out with very little weight because tailor numbers increase too.

If coming out of the river to hit the Coffee Pots, try to jig up some yakka, as tailor love nothing better than a good-sized livie drifting around the 10m contours.

Or if you’re leaving the river, target some poddy mullet, herring and prawns because snapper love live bait – you can also jig some squid up around the rock wall at the entrance to the river.

If not, a fresh pillie will do the trick too.

You also have a good chance of hooking up to bay jewfish that patrol the contours, especially if there is a bit of structure about.

Some of the best contours are around Mud and Green islands and the Wellington Point drop-off from the entrance to Manly down towards Raby Bay.

Peel Island fishes well on a rising tide, while Harry Atkinson Artificial Reef fishes better when there are less boats about because too much noise usually turns fish off, particularly larger snapper.

Another place to try is the isolated structure around the Measured Mile and the entrance to the Pearl Channel.

If they’re not biting there, head up the shipping channel and fish the coffee rock areas along the edge of the channel – this applies to areas from Tangalooma right up to the Bulwer ledges.

Coochiemudlo Island fishes better in winter, so hitting the artificial is also not a bad idea.

The Redcliffe shallow reefs are also a good option as snapper numbers have increased over the past couple of years.

One of the best places to target winter snapper is the lower end of the Brisbane River, especially from Clara Rock down towards the container terminals, remembering the 30m exclusion zone around the terminals.