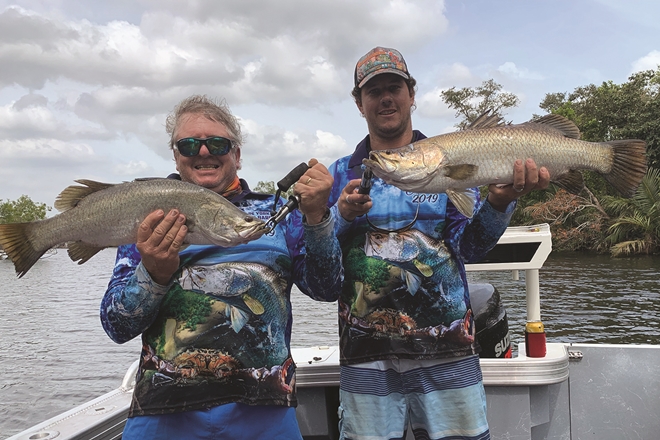 IN the previous edition of BNB I penned an article on preparations for our annual week-long fishing pilgrimage to chase Cape York barra in the upper reaches of one of my favourite top end river systems.

This year’s trip was titled the ‘Cape York 2019- Beer and Barra Classic’. A lot of planning goes into these extended trips, as we travel significant distances into remote areas (500km) by trailer boat from Thursday Island and crews need to be completely self-sufficient for the week. Cape York is a wild place and shouldn’t be underestimated, as mistakes can be costly.

We spent the day prior to the trip doing final checks and attempting to pack all supplies somewhat systematically while considering weight distribution, as we would be carrying a lot of additional fuel, ice, food and other supplies. We had three other boats joining us for this trip. My crew consisted of my old man Gary, father-in-law Neville and 11-year-old nephew Axel who were all keen to bag a Cape York barra.

This year we actually had a couple more factors in our favour such as better tides, moon phase and even the water temperatures had increased.

The long-awaited departure date finally arrived and we set off across a treacherous stretch of water known as the Endeavour Strait, which was named in 1770 by Captain James Cook after his own ship. Despite the wind being up, the current was running hard in the same direction, which meant conditions were reasonable. We have experienced this crossing far worse in years gone by.

After a 4.5-hour journey, we had reached our destination. We unpacked the boats, set up camp, cracked another beer and took in the surroundings. I’ve fished this river many times, so I was confident traversing the maze of sand and rock bars to access some of the better Cape York barra fishing in the upper reaches.

We had a high tide early morning and late afternoon, which would allow us to venture into the fresh, fish the low tide and then slowly work our way back downriver with the incoming tide. We were up early the first morning. After a quick coffee and brekky, we pulled the boat to the shore using the stern line (this is croc country), dragged in the anchor and motored straight upriver with one of the crews following closely behind.

I had marked out the channel the previous year, so little time was wasted navigating the shallow river. It is a hard decision to drive past so many fishy-looking snags. However, I had a plan in mind and knew I wanted to spend more time in the upper reaches because this is where we had found the better fishing and it is just such a magic part of the world as the scenery changes and the banks change from mangroves to palms.

After a slow start, I set up a troll run along a bank where we had found barra in years gone by. We were using a couple of Classic Barra Ghost 10’ divers and it didn’t take long for the old man to hook up on a nice Cape York barra. Unfortunately it wrapped him around a snag and despite doing our best to free it, the first round went to the barra.

Next to hook up was my 11-year-old nephew and he did a great job with the rod, soon bagging his first barra at 66cm. It was high-fives all round. We dropped another fish before I decided to quietly anchor where we had received all the hits. We peppered the snags with a couple of my favourite lures including the Ghosts in Casper colour and the ever-reliable Gold Bombers.

It wasn’t long before the second barra was in the boat. This fish to my nephew was released after a few photos. What followed was a Cape York barra session I won’t forget and it almost seemed like a fish a cast, so long as you could land your lure in an area about a metre square. I was stoked because everyone on board was bagging nice barra from 60-80cm. The highlight of the session was a double hook-up with my nephew as he boated a solid 74.5cm model and I was very happy with my 86cm specimen.

While I was using my trusty Shimano Curado 200HG baitcast reel (which I will happily cast all day), the rest of the crew were knocking over great fish on 4000 Shimano Siennas, which are such great little reels, particularly for the price ($45!). Our hot session slowed, so after a quick lunch we set off, casting our way downriver. We anchored at a rock bar and threw a few flesh baits for a mangrove jack using 5/0 Big Gun Mustads, 60lb Black Magic leader, 30lb Platypus braid on 4000 Sienna reels and Shimano Raider 601 Barra Spin rods.

We managed a couple of cod and the old man scored a nice jack. One of the other crews anchored nearby and the sledging began because they hadn’t had any luck on the barra. Before pulling anchor, I decided to cast a Gold Bomber around the rock bar. I briefly hooked up to a solid barra that spat the hooks.

Soon everyone was casting lures and it was my father-in-law, Nev, who boated a solid 68cm chrome saltwater barra. I followed with a jack on a Gold Bomber and then a beautiful 78cm Cape York barra that put on a great show in front of the other barra-less boat. The other crew yelled a few choice words, pulled anchor and took off, much to our entertainment.

Of course, I continued to remind them of what they had witnessed on the VHF. We worked our way back to camp, pushing through thick smoke from a bushfire that had broken out on the other side of the river. Back at camp we discovered a dingo had been through the camp and helped itself to any food items that weren’t packed away, mainly bread and snacks left on the camp table. A few beers around the campfire topped off a great day.

The following day the forecast was set to drop out, so again we were up early. We headed to a reef about 20 nautical miles away. Despite some great shows on the sounder, we had little reward for our efforts, only boating a couple of nannygai, trout, sweetip and brassy trevally. The weather picked up and we punched into a nasty chop back to the river, trolling up a couple of school mackerel as we entered the river.

A thumping GT of about 25kg also provided some great entertainment. The wind was set to really kick in over the next few days, with a strong wind warning issued. I often use the satellite phone to get regular updates and it brings peace of mind when exploring remote areas. With the news of strong wind on the way, it was back to chasing barra and we headed back upriver the following day.

I find that once a couple of fish are located, an effective strategy is quietly anchoring because it allows you to really target where the fish are holding and allows everyone to have a fish. Another reason I often anchor is my 7m Fisher isn’t the ideal barra boat and the cabin often catches the strong 25-knot gusts, making it challenging for whoever is on the wheel. A 4.3m tinnie with a Minn Kota would be ideal, but that said, this method of fishing was proving successful.

The Cape York barra were really firing and we bagged another 24 barra to 80cm in a two-hour window of madness. I managed a quadruple hook-up with all three of my crew and it was a red-hot session I won’t forget. We released all the fish because freshwater barra aren’t regarded as great table fare and we were just grateful for the experience.

A Queensland grouper got in on the action and stole a few fish at the side of the boat, which certainly got the heart racing and was a surprising sight so far upriver in the fresh. Once the fishing slowed, we switched to plastics because I assumed the fish may be sitting deeper. Things fired up again and we boated another half dozen fish on pre-rigged white Squidgy Slick Rigs before things went quiet.

I was feeling pretty elated with the fishing we had experienced and it was great to see my old man, father-in-law and nephew boat great fish. The next day was a lazy one around camp because all crews were buggered and we needed to ensure we had plenty of fuel in case it was a rough journey home across the Endeavour Strait. We checked the crab pots (which had been smashed by nurse sharks), flicked a few lures for queenfish along the campsite and kicked back with a beer and reflected on the fishing we had experienced.

We decided to pack the boats on the high tide that afternoon so we didn’t have to carry gear as far the next morning and could depart for home on first light. The run home was surprisingly good. With schools of northern bluefin and mack tuna busting up, it was difficult to drive past them. We caught a couple of tuna on the home-made butter knife lures while the other crews caught up.

Nev also managed a spanish mackerel that hit a Rapala X-Rap Magnum 30. The nephew was stoked to spot a couple of crocs on the way home. Despite the wind, the conditions were fair because once again the current was in our favour and the 7m Fisher ate up the chop. We arrived home satisfied but completely buggered with a huge clean-up ahead.

Do the miles and get the smiles! Check out videos and more photos from this trip on our Fishing Missions- Northern Australia Facebook page.    cape york barra on cape york barra