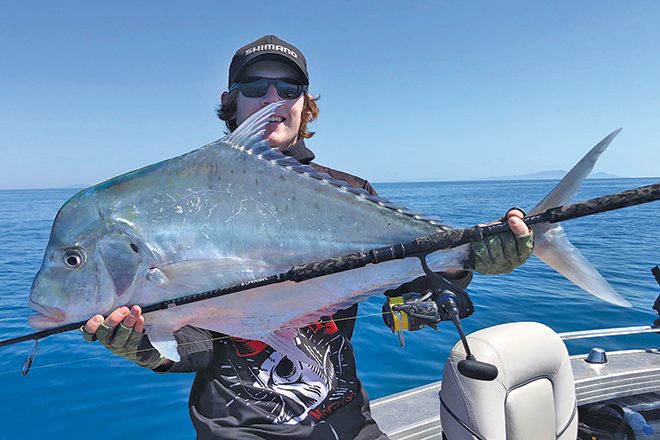 Patrick Junior with the first of many metre-plus diamond trevally.

WITH the saltwater barra closure in place on the east coast as of November 1, we are lucky to have so many options available to small boat anglers.

Sometimes deciding what to target or which way to go is the hardest part.

Fantastic grunter move into the estuaries and in good numbers. Add to this many other estuary species firing and a fishing trip working the mud flats sounds very appealing. Another option is pelagic action for GTs, diamond trevally, tuna and so on. Anglers can test their gear and have a great sportfishing trip.

For those anglers who can’t go three months without the feeling a mighty barra on the end of their line, three awesome impoundments full of massive barra are located within an hour’s drive of Mackay. On a recent trip for some guys from around Canberra, after a few days of terrible weather the stars aligned and the weather played the game.

This gave us an opportunity to venture out of the estuary to the close inshore shoals and bounce micro jigs around to stir up some pelagic action.
Leaving half an hour before first light got us on the broken grounds at the perfect time. The sun’s first rays began touching the water at the same time as our lines and it wasn’t long before one of the boys’ rods folded to the water, with line screaming in the other direction.

There is nothing like the sound of line peeling from a quality reel early in the morning and when it happens in the first five minutes, you start to think you are in for a good day! These grounds have supported countless species in recent trips, so picking what has taken your lure by the way the fish fights is always fun.

The first fish to show interest in the jigs were cracking grunter, with three or four coming to the boat in no time, the best of them well over the 60cm mark. These are the same schools of grunter that start following and feeding on the biomass of herring present in the estuaries. The action then stepped up a level as the jigs found monster diamond trevally.

While these fish are fairly clean fighters usually not looking for structure to escape, they really know how to test your gear and anglers’ patience.
Over the next few hours, all aboard caught several great diamond trevally, most just over metre mark. They are fantastic sportfish to catch and make for absolutely awesome photos, especially in the morning light.

Going from grunter to diamonds is going to the next level when it comes to fighting abilities, as is going from diamonds to giant trevally. Giant trevally are renowned as one of the best fighting fish on the planet, and the fish we hooked next was living up to its reputation, trying on several occasions to find its way back to the structure and freedom.

Using a 6000 size spin reel and landing a 20kg-plus GT on relatively shallow grounds is a fantastic angling effort. It took well over 15 minutes to get a visual on the fish and another five or more to get the awesome animal on board for a few photos and a safe release. A great moment for the angler watching the fish you had been battling swim away safely to be caught another day.

All fish caught were released, including the quality grunter that started the morning’s action. Some days on the water everything just falls into place, and this was one of those special days.