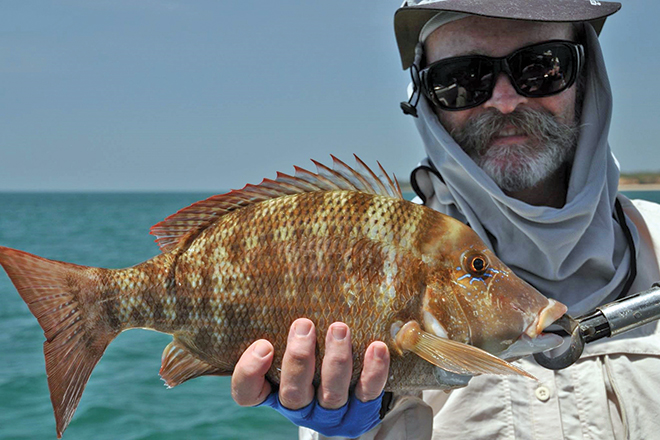 A grass sweetlip from Curtin.

Fishing the shipping channel and surrounds

THE shipping channel stretches from the mouth of the Brisbane River all the way north to Caloundra and offers a diverse range of bottom structures.

There is very little reef but a lot of coffee rock and some wrecks, along with the man-made beacons. It also offers a diverse range of fish species, from bottom dwellers to surface feeders. Northern Moreton Bay is predominantly shallow and sandy, with very few fish-holding areas due to the amount of sand.

To successfully fish the northern bay you have to overcome strong tidal flows on both outgoing and incoming tides, and when fishing the shipping channel you have to contend with a stronger flow than in other parts of the bay.

The predominant surfacing-feeding fish are the tuna and mackerel families, and they only pop up in areas where bait movement occurs. Bait travels through the shipping, Pearl and Rous channels to get into the bay.

Birds are the big giveaway as to where the pelagic species will be feeding. It’s also worth looking around the eddies coming off the many beacons throughout the bay. As you leave the mouth of the Brisbane River, the channel beacons run a fair way out into the bay.

At night, both sides flash in unison. To the left past Luggage Point is Koopa Channel, which runs north towards Nudgee, otherwise a massive sandbank system stretches up towards Bribie Island and across to Moreton Island, with the Pearl Channel cutting these banks in half.

The banks east of Koopa at times hold whiting and sand crabs, while further north the massive bank system is home to the bay’s largest sand crab population. The Pearl Channel has good depth and a fair few coffee rock structures.

On some king tides these structures can be covered in sand due to the big tidal flows. Moving back to the mouth of the river, to the right as you enter the bay is a large rock wall forming part of the reclamation works for the Port of Brisbane.

Some species are now starting to move around this rock wall. In the middle of the shipping channel are two beacons called the Coffee Pots, and directly south of these beacons is Mud Island and access to the large expanse of water called the Paddock.

North of the Coffee Pots are two wrecks, and a couple more can be found near the Measured Mile, though they don’t seem to fish too well due to the structure decaying to a minimal height. The easiest way to find pelagics as you travel across to the Four Beacons or the Pearl Channel is to look for birds.

You may be lucky and find the fish by spotting them chopping up the water. Usually pelagics can be found at the bottom and top of the Pearl Channel. Halfway across the bay in the northern shipping channel are two beacons called the Measured Mile.

These two beacons do for some reason hold a few fish at times and coffee rock bommies and wrecks can be found nearby. Near Moreton where the shipping channel turns north are the Four Beacons. These and the beacons all the way up the inside of Moreton hold fish depending where the bait is.

It can get crowded at times, with numerous fishos jigging the eddies at the base of the beacons. South of the Four Beacons are the Sandhills and the start of the seagrass areas where squid and whiting are often found. The shipping channel north of the Four Beacons all the way to Bulwer is the fish highway of the central bay.

Jigging any of the beacons through here is the way to find doggy mackerel as long as bait is holding around the beacon. Just north of the Four Beacons is the shipwreck of the Captain Neilsen. Very little remains, but it can at times hold snapper.

Heading further north you’ll find the famous Tangalooma wrecks. Plenty of fish can be found around these wrecks but they are well educated due to the popularity of the spot with fishers and divers, making them hard to connect to.

Midway between Tangalooma and Bulwer is the Curtin Artificial Reef. Markers on Moreton show the start and finish of the wrecks. Fishing among the wrecks is a gear-snapping affair. It’s best to fish the shipping channel side of the wrecks.

The channel is quite deep through this area and has structure along the side of it. Trolling Rapala lures, throwing large Gulp plastics, floating out live baits (yakkas, slimies) that can be found around some of the bay’s structure and the good-old pillie on gang hooks or a two-hook rig can at certain times of year draw a strike from a longtail tuna, cobia or spanish mackerel.

You can also attract the odd GT here, and the best way is to troll the edge of the channel drop-offs. Curtin holds a variety of species, from snapper to spangled emperor, cod, tuskfish, morwong, nannygai and on occasion small red emperor, but once again tidal flows can be a big deterrent.

With Moreton Bay, the problem is often deciding what style of fishing you want to do. Starting small will usually get you a decent feed of winter whiting on the banks west of the shipping channel or around the Sandhills.

They can be found right throughout the year, and during winter cricket score catches can be had, but it’s a good idea to limit your catch as they can become tedious to clean. The banks across to the Pearl Channel are often a good area in which to quickly catch a good feed of sandies.

And if you drop down a bug tray you could end up with a feed of Moreton Bay bugs. If you find a school of mack tuna feeding, it doesn’t hurt to drop a bait to the bottom because often free-loading fish like snapper, sweetlip and others are feeding under the tuna to pick up the leftovers.

You can fish in close to some of the coffee rock structure sides of the channel, which often hold big spangled emperor, snapper and squire, as well as tuskfish. You’ll be surprised at some of the reef species that turn up between Curtin and Bulwer.

It pays to fish the drop-offs along this stretch with crabs, but use heavy gear because some of the tuskies (blackspots) are monsters and will make short work of light gear. The last place past Bulwer is the Wild Banks Artificial Reef, and often big pelagics and cobia can be found here, along with a few species of reef fish.

I recommend using live baits if fishing this area. The attached map also gives you a rough idea of where the green zones are, though for better and more precise positions, head online and search for Moreton Bay green zones.

Just remember, if leaving from some of the southern boat ramps the ride home can turn into a drenching and rail-gripping affair if the wind blows up over 15 knots. A couple of boat ramps make sense in the Brisbane River.

I usually use Whyte Island because it’s closer to the mouth, but Pinkenba and Nudgee on the northern side are close too. The only trouble with Nudgee is the entrance gets very shallow on low tide.

I hope this has given you some idea of where to fish in the top half of the bay and the many species the shipping channel and structures around it can throw at you.