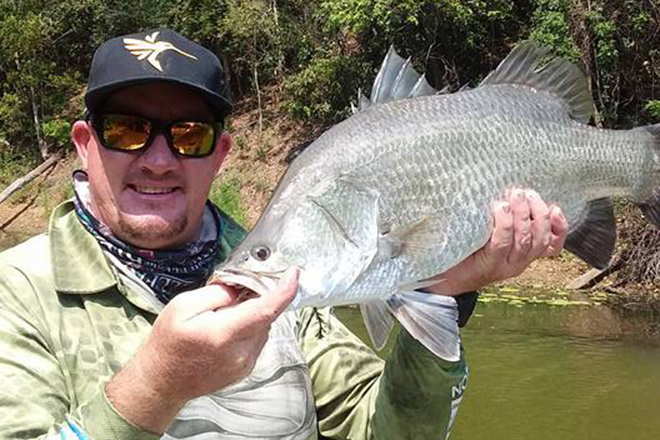 Fishing still good around Bundy despite the heat

Finally, it’s great to see some cooler weather upon us in the Bundaberg area to cool things down a bit, making it more comfortable to spend some time on the water. The crazy heat earlier in the week was making it nearly unbearable to be out on the water. We are still very lucky that the fishing in our area is still good with all systems producing some quality fish.

THE BURNETT RIVER
The Burnett is still firing and some real quality fish have been reported. There has been some big cod, large flathead and an odd mangrove jack being caught along the North Wall. Live-baiting or trolling deep diving lures along the wall has seen the better fish caught. A stand-out lure has been the Halco 125mm Scorpion in a 5 metre diver. The sand flats up near Rubyanna have been producing some nice flathead and some thumper sand whiting, and the making tide has been best. The rock bars and deeper holes have still been producing some grunter, jacks and a few river jew. The sand flats above the bridges have produced some nice sand whiting, bream and a few large sickle fish. A few mud crabs have started to move – we just need a bit of rain to really get them going.

ELLIOTT RIVER
For a little system, the Elliott really surprises us and the past few weeks has seen some quality jack caught. Cod and grunter have also been caught and live-baiting seems to be best in the cooler water. There is heaps of whiting and flathead over the sand flats. Drifting with the making tide seems to be a good start to find the whiting, then pull up and get stuck into them. There is also plenty of dart out on the beach. Fresh beach worms is the way to go for a feed of dart.

BAFFLE CREEK AND KOLAN RIVER
Both the Baffle and the Kolan have produced some great fishing with both river mouths producing some red-hot flathead fishing. The making tide seem best for the flathead. Fresh baits such as hardy head or sprats rigged on a 2-hook gang rig have been working well. There is still good numbers of bream, whiting and grunter throughout the creeks and plenty of cod and mangrove jacks among the rocks and in the deeper holes. Live baits, soft vibes or soft plastic paddle-tails have been working well.

LAKE MONDURAN
Lake Monduran has produced a lot of barra this week, with some good numbers caught. Barra to 90cm were reported and most boats managed up to five fish per session, making for some exciting fishing. Most of the barra have been caught on predominant points with the wind blowing straight onto them. Smaller lures still seem best with Jackall Squirrels, Duo Realis 100s and small paddle-tail soft plastics to 100mm being the go for the Monduran barra.

The Bundaberg Toyota Golden Barra competition is now well under way and continues until 31st January 2019. The Golden Barra is worth $15,000 and entry is free. Jump onto https://www.goldenbarra.com.au/ to register. The Terms and Conditions can be found at https://www.goldenbarra.com.au/golden-barra-terms-conditions/ If you haven’t registered, now is the time to have a go.