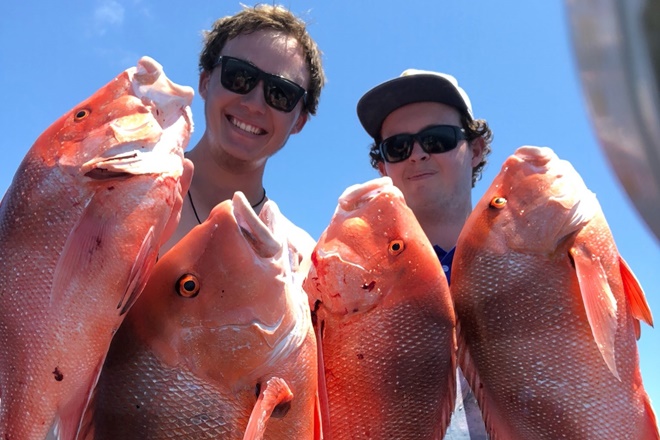 Fishing the deep the go off Bundaberg

Looking at the forecast for the Bundaberg area for this weekend, things are looking pretty good!  The tides are looking pretty small so fishing the deep will be ON!  The red emperor have been on the chew over the last few weeks with quite a few people getting close to their bag limit every trip.  Big flesh baits and live baits have been the best way to target them.  Fishing in 40m of water is a good depth to start looking for these trophy fish.  Also, the coral trout and redthroat emperor have started to fire up with the water temperature rising.  Putting a floating pilchard out the back is also a good idea.  You never know when a spanish mackerel or a snapper is roaming around near the surface this time of year.

The Inshore reefs will be well worth a look over the weekend.  With plenty of bait holding on them at the moment there’s plenty of pelagics around.  Good sized spanish mackerel and longtail tuna have been smashing the surface for a good week now.  They are feeding on small baitfish so make sure you use very small lures or baits.  Just floating pilchards out with no weight is one of the easiest and most effective ways when anchored or drifting.   There’s also been reports of horse grunter getting around on most of the inshore patches.  I like fishing for them with 20g Samaki vibes and 5” Zman soft plastics.  Also larger sized prawns are among their favourite baits.

The Burnett has cleared up a lot over the past week.  The flathead seem to be the standout catch over the past week.  We’ve had reports of people landing over 20 in a session.  Using soft plastics, vibing lures and fresh bait are all hot ways to target them, and they have been mostly found on the shallow sand bars.  The mangrove jack have also been on the chew with the hot days we’ve been experiencing.  Rock bars and fallen timber are the structures to look for.  Hard body lures and 4” soft plastic paddle tails have been the hot lures.

The Elliot is still fishing awesome for your whiting!  Beach worms and fresh yabbies have been the standout baits.  The start of the incoming tide has been the hottest bite with reports of 40cm whiting being caught regularly.  There’s also been reports of a few mud crabs being caught, so it will be well worth throwing some crab pots in while fishing the incoming tide.

The Baffle and the Kolan systems have been fishing very well for your mangrove jack, with people catching them up to 56cm!  With the smaller sized baitfish up there at the moment, the stand out soft plastic has been your 3” Zman Minnowz.  Also there’s been some awesome captures of big queenfish at the mouth.  A fun way to catch them is on surface poppers. Remember not to use poppers that are too big, so you can match the smaller baitfish.

With the saltwater barra closure starting on the 1st of November, Lake Monduran is the place to go to get your Barra action!  Luckily enough the barra fishing is firing up there at the moment so you’ll be in for a good time!  Again, your early mornings and late afternoons have been your hot bite time.  Jackall Squirrels are again the hottest lure to use.  A few guys have been getting into the first light surface bites.  I’ve found the 5” Zman Pop Shadz very effective for them over past years.

Till next time, keep it real