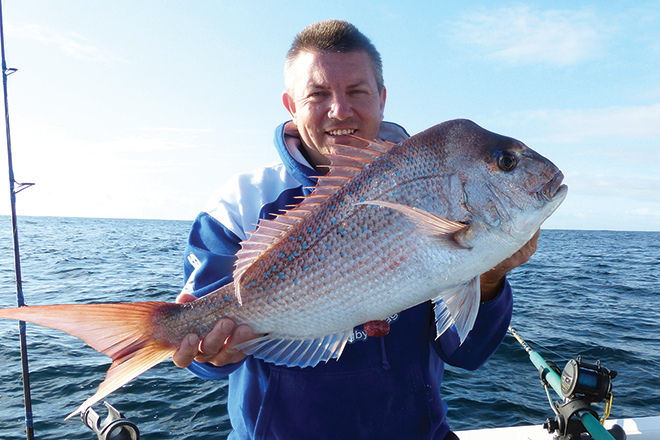 The author with a solid late-season snapper.

Fishing the transition period on the Gold Coast

WITH spring in full swing, we are well and truly in the transition period for Gold Coast fishing.

The good hauls of snapper have slowed, as have the jewies. Some good snapper are still around during the transition period but it’s their numbers that will differ. At the back end of the season you tend to get the bigger models, so ensure all your terminal tackle and knots are top class because many a trophy fish has been lost through tackle failure, and at this time of year you don’t get many second chances.

At the time of writing the water temperature was still hovering around 20C. I expect this to rise 1-2C by the end of November. Over the first few weeks of October a fair bit of current was around and a lot of whales were migrating south, signalling that the warm water is not too far away. But the most telling factor that summer is coming is the number of smaller marlin that have started to show up.

It really gets the blood pumping, thinking of the fishing we are in store for as we head into Christmas.

Over the next month or so, as the transition period continues, you really have to hedge your bets as to what to target and maybe even change plans once you are out on the water because you can connect to anything from a snapper to a marlin, all on the same spot.

The highlight over the past month was feeding livies to yellowtail kings. A school took up residence under our boat while at anchor and every drop resulted in a hook-up within a minute of the bait hitting the water. It was good to blood the new Shimano Talica on some decent fish.

In the rivers and creeks, decent jacks have already been caught and they will really ramp up as the warm, humid weather kicks in, especially after a good afternoon storm. All those favourite snags and rock walls will be worth a hit, with a whole new generation of red dogs ready to mangle any lure or bait that runs past their nose.

Flatties have been fairly active recently, with plenty of flathead lays on the banks at low tide. The dredge has moved into Currumbin Creek, so this location will be well worth a shot as the dredge stirs up the bottom. Whiting and flathead especially will be drawn to its vicinity.

I recently had the chance to have my first-ever hit-out on a freshwater dam. It was all new to me, using handlines and worms for bait as we targeted yellowbelly and hoped for a cod. Well I lucked out on actually catching a fish but I did have a few bites. The same couldn’t be said for my mate Rory, who had his line in the water for all of a minute before he was onto a good fish. I couldn’t believe my eyes when I saw the size of the fish he pulled up on the bank.

We were fishing Coolmunda Dam, which is about an hour past Warwick, and has recently received a heap of water as a result of good rains. Great camping facilities can be found next to the dam and the town of Inglewood is only a 15-minute drive and stocks all your basic needs. Back on the local scene, the Tweed River Bar is starting to look very ordinary, with a shallow bank building up about 50m inside the bar.

This is going to make it extremely dangerous on an outgoing tide. The shallow bank about 200m out of the bar is still there too, and at about 3.5m deep it is catching even the slightest of swell, so use extreme caution. Currumbin Creek Bar is a mess and it’s almost impassable from mid to low tide.

Even with the dredge in the creek, it is going to need some heavy surf and a flood tide to clear its throat. Tallebudgera Creek Bar has a small channel for entry and exit but as usual the bank in front catches the swell.

The Seaway hasn’t changed too much but Deadmans Bank to the north is worth avoiding.
‘Til next month, screaming reels to you all.

Heath has been fishing since the age of three and grew up fishing the mighty Georges and Hawkesbury rivers.
Previous Zerek Hy-Braid
Next Z-Man 3.5″ Trick SwimZ