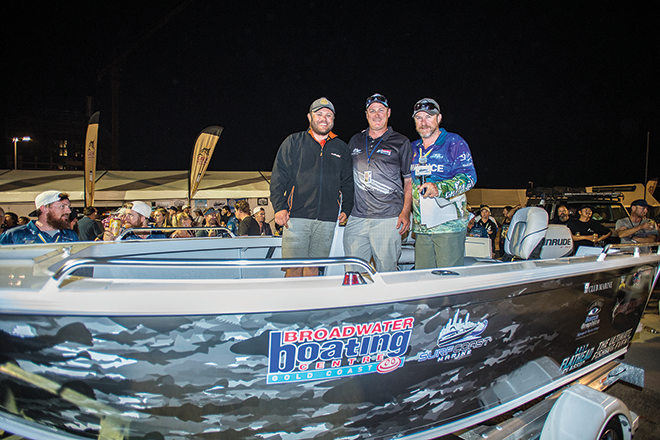 WOW, what a few days it was. The Gold Coast Flathead Classic is a flathead comp that many anglers from up and down the east coast mark on their calendar.

It is one of the biggest fishing competitions in Australia and the way it is run is an achievement the Gold Coast Sport Fishing Club should be very proud of. This year my son Ethan and good mate Matt fished with me as NuLook Floors Northern Rivers in the three-person team division.

Six NuLook Floors teams were entered this year, with all teams fishing hard, which the results on the scoreboard showed at the end of the three days of fishing. Our plan was to fish deep around Jumpinpin on the first morning and then make further decisions after seeing how the deep was fishing.

As I have found in previous Classics, fish in the deep can be there one day and totally gone the next, so we had pre-fished a fair bit, practising trolling and fishing shallow drains that run off the flats to at least have a solid backup plan if things didn’t pan out in the deep.

As luck would have it, the fish were firing in the deep and we caught both solid and small fish for most of the day. The biggest for day one was a 73cm model taken on a Samaki Vibelicious Thumper Tail in Chartreuse Ginger Squid. This fish was hooked by simply hopping the vibe down some deep ledges around the Pin Bar.

We finished up at 4pm as per comp rules and after speaking to a few other teams it sounded like most caught plenty, with the Whyte brothers consisting of Nick, David and Brendon really cracking a pattern. We headed to dinner and handed in the scorecard and later that night found out we managed to land ourselves in the top 10 out of 276 teams.

Day two brought a huge change, with a northerly wind absolutely howling. The number of boats fishing the Pin area had doubled, probably because all the teams that fished the area on day one did so well. I managed to land three point-scorers very quickly, with the first fish coming on the first cast.

Sadly, after the first 30 to 60 minutes, if you didn’t cash in, the rest of the day was a grind. We managed a few and then went to troll the flats. We picked up several fish by trolling, which was handy to keep the points ticking over.

The pick of the lures on the troll were custom-painted O.S.P Dunks and custom-painted Zerek Tango Shads, with the better fish coming on the Dunks. Day three had a much better weather forecast, but I had a feeling it was going to be tough because of the pressure the system had been placed under in the previous days.

Once again we started off well, bagging a number of fish quickly. We then moved to the bar area and got a couple more, though I frustratingly dropped three really good size fish. That was about it for me for the rest of the day, with Matt and Ethan catching the rest of our fish, while I seemed to be best with the net and camera.

Our third day finished slightly better than day two, which I was happy with and thought we might be lucky enough to finish in the top 20, an outcome I would have been really proud of considering Matt had never fished a Classic before and neither had my 16-year-old son.

We headed to the final day’s presentation and I was tired like the others but was feeling pretty good because my name had been drawn out on the Tuesday night to go in the running for the major lucky draw prize of a new boat, motor and trailer.
Although I never for a second thought I would be lucky enough to win the boat, I knew all the prizes for the 28 competitors in the running were great and I was going to be stoked with whatever I went home with.

The presentations were concluded and we managed to sneak into the top 10 in the three-man division, with the Whyte brothers absolutely schooling the rest of the field and Brendon Whyte taking out champion angler with an amazingly high score.

This team really is the benchmark for other teams to try to reach.The brothers fish so well together they’re like a well-oiled machine. It’s a credit to their ability and I must say a massive congratulations to the three of them. This brings us to the lucky draw.

Over the four nights of the event 28 lucky anglers are drawn out and on the final night the 28 entrants sit on chairs and hope their number isn’t called out first. However, as I said, every one of the lucky 28 entrants walks away with a great prize.

Once the numbers narrowed down to the top 10, the nerves started to build but I would have been happy with any of the prizes, some of which included expensive Lowrance sounders and Shimano fishing gear. Now down to the top five, the nerves really kicked in. Next thing I knew I was climbing into a new Quintrex boat as one of the final three entrants in the draw.

The first guy in sat straight in the driver’s seat, which I thought was a bit like the kiss of death, and wouldn’t you believe it he was first to exit the boat. Then it was down to me and another guy as the final two.
I was now beside myself, knowing I was either going home with an expenses-paid fishing holiday to Papatura in the Solomon Islands or a Quintrex 460 Renegade package generously supplied by Surf Coast Marine.

With my son and Matt standing beside the boat, I could hardly watch as the numbers were rotating up on the screen and to my absolute surprise I was now the lucky winner of a Quintrex 460 Renegade side console fitted with a 75hp Evinrude E-TEC along with a number of other great prizes.

I simply couldn’t believe it and found it hard to even speak, let alone think of the words I should be saying.
I would like to take this opportunity to say thank you to the Gold Coast Sport Fishing Club for putting on such an outstanding tournament.

It must take an amazing amount of effort and a serious number of hours to organise. Congratulations to all the competing teams, especially the Whyte brothers. And thanks to all the sponsors that come back year after year to support the Flathead Classic, especially Paul Banning and his team at Surf Coast Marine (the new Quintrex

Frontiers look like awesome machines on the water).Last but definitely not least, thank you to my personal sponsors: CNC MachineIt – SeaDek, and Josh and Kate at Samaki.The last-minute SOS shipment of lures was much appreciated.

The person I must thank most who has helped me tremendously with sponsorship this year and allowed me to fish so many tournaments is Wayne Smith from NuLook Floors. From all of us in the NuLook Floors fishing teams, thank you so much mate.

Jamie’s fishing background starts like most; going fishing with the old man and soaking baits from Donnybrook to Caloundra. He then began working on commercial fishing boat Far n Wide between Mooloolaba and 1770 where he mostly targeted reef fish and pelagics on rod and reel or deck winches in deeper water. Then Jamie got hooked on tournament fishing. In 2012 Jamie bought a 21’ Skeeter bass boat with a 300hp Yamaha outboard, which gets him to where he needs to be in no time. He travels eastern Australia competing in various comps and is ranked among the top-10 Australian anglers, which he aims to improve on in 2015. You can follow Jamie on Instagram.
Previous New Sea-Doo platform brings the rider experience to the next level
Next Perfect days on the Noosa River 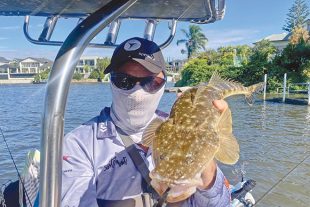 How to troll for flathead

Hi everyone, can you believe it… June already, wow! Flathead trolling Not that I’m complaining …