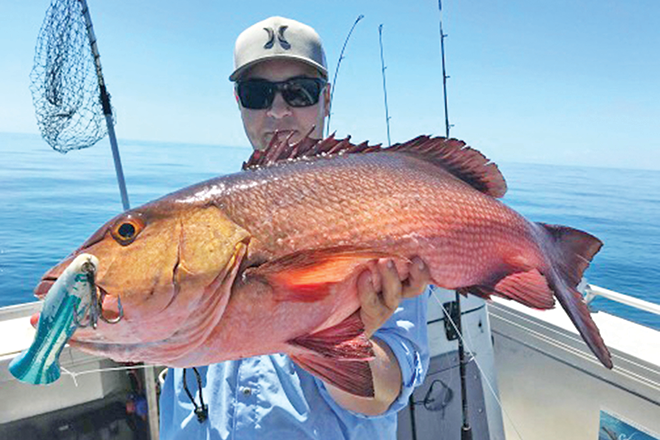 BOY, did we get a big wet this year. It was fantastic to see. We ended up getting two floods in two and a half weeks, which really gave the Herbert and Seymour rivers and Hinchinbrook Channel a massive flush.

Everything has settled now but Cyclone Iris really played havoc with our guiding services for a while, with lots of postponed trips due to the flooding and weather.Now we are getting back on the water again and can see the flooding has helped the channel come back to life. Jelly prawns seem to be everywhere, poddy mullet are jumping in the boat and there’s bait galore for the fish to fatten up.

Lots of new snags are also in the water, which will provide fantastic fishing by the end of the year. Mangrove snags generally take about six months to die off and for bacteria and marine growth to take over. When this happens, the barra, jacks and fingermark move in, using the snags for protection and as ambush points.

The downside of the floods is some of our favourite haunts that have produced lots of fish have been washed away, and because gutters and sandbanks have changed, it takes a little time to relearn the system. Quite a few nice jacks, barra and fingermark have been on the chew, with some monster fingermark caught around the sugar loader and shallow water wrecks.

On the bluewater fishing charters, clients have landed absolute stonker nannygai. Clients new to the bluewater popper and stickbait scene have been enjoying fantastic GT popping as well as epic flats fishing on the coral cays of the Great Barrier Reef. Lots of women have been getting in on the scene as well, which is fantastic to see.

I am very excited about the fishing to come due to the good flood. Awesome times are ahead. Now just a little political thing.I hate getting into politics but this is probably going to be our best chance to take some action due to the Fisheries Reform as part of the Queensland Sustainable Fisheries Strategy 2017-2027.

We need to see some changes to make Queensland one of the best fishing locations in the world. Unfortunately, I think the Department of Agriculture and Fisheries and our politicians have really let Queensland fall behind other states and this is our chance to make a difference. We really need to address bag limits and size limits of our fish, especially barramundi, for which we have a maximum size limit of 1.2m, which really is a joke.

We need a narrower slot limit, with something along the lines of 55cm minimum and 85cm maximum and two fish per person ideal. This will ensure our breeding stocks are kept safe. Keeping our breeding stocks safe will in turn give us a high recruitment of fish stocks during the year, and this will snowball as more fish reach the mature size where they can’t be taken, where in turn they will produce more recruitment and so on.

I believe it would only take two or three years to see a huge benefit and I believe it would be so successful we wouldn’t need a barra closed season in Queensland anymore. The relatively narrow flathead slot limit has proven very successful, as evidenced in Moreton Bay, Jumpinpin and the Gold Coast where the flathead have come back in great numbers.

This was a masterstroke by the Fisheries powers that be, yet even with its success they haven’t introduced this method for other fish species in Queensland. So please jump on daf.qld.gov.au, check out the Fisheries Reform discussion papers and really think about the future of our fishing. Have a good think about bag limits.

It’s much better to have a smaller bag limit that you can catch every time than a larger one that can hardly ever be filled and damages our fish populations.
Until next month…