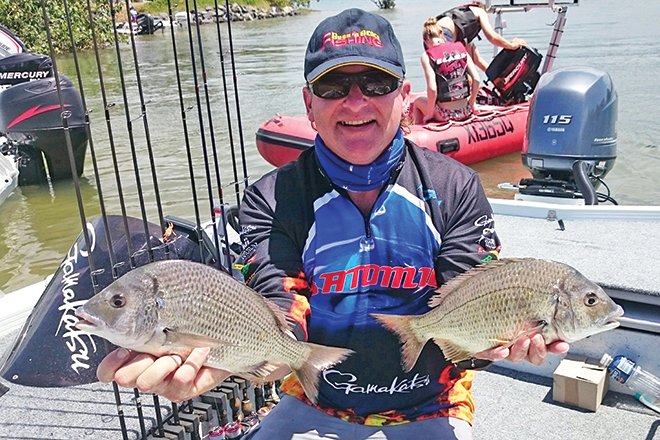 A couple of decent bream caught by Ben, but Wish held them for the photo.

THESE days, tournament angling never seems to have an off season.

It feels like only yesterday that we were fishing the ABT Grand Final at the Clarence River, and literally a month or two later the first comps of the new season are under way.

We have chosen once again to fish the Gamakatsu Team Series and are very excited to announce that Frogley’s Offshore has agreed to support our two teams on the tournament scene. For those who don’t know, Frogley’s houses a massive range of brands including Megabass, Samurai, Atomic, Kershaw, Mako, Gamakatsu, Bassday and Fuji to name a few.

We are delighted to be associated with the team at Frogley’s and are enjoying having a play with some really cool gear. Anyway, one of our first events of the year was held on the Tweed River. The Tweed is a beautiful venue located just over an hour’s drive south of Brisbane, so easily within reach of people living in the southeast corner of Queensland.

The river is traditionally known to hold plenty of bream but on average they are smaller than the fish in most of the other systems in southeast Queensland and NSW. This often makes for a close comp and you always feel like you are in with a shot. Our two teams did a pre-fish but it didn’t really reveal much.

Fish were in all the usual haunts but schools were hard to come by and quality was a little hit and miss – typical Tweed. The other variable on comp day was a predicted strong wind, which can make things in the lower reaches very difficult, particularly with wind against tide.

Additionally, warm water in summer and early autumn can see fish spread throughout the system and make them harder to find, whereas in winter the deep walls at the lower end normally hold all the fish.
Britto and Lex decided to start out at Fingal Wall, which was the perfect location for the stage of the tide.

They tried a variety of offerings including Atomic Plazos soft plastics, Atomic Hardz cranks and crab-profile lures. The boys were also trying out some new blanks from the Samurai stable, with the pick being the Infinite FIN-8-F70; a beautiful stick with a soft tip and plenty of grunt down low.

Their drift started well, with five fish in the first hour including a couple of larger specimens above 30cm fork length.

Britto and Lex continued to concentrate on the kilometre-long stretch, methodically working the wall.

The approach paid off and they picked up a number of small upgrades including a 36cm fork-length model that proved to be a kicker fish and anchored the bag. On the change of tide a decision was made to try the Terranora Wall, which can often hold larger models, but this plan was discarded after one drift for no bites.

The move was made back to Fingal, with two more drifts yielding another upgrade. With an hour left, the boys decided to head a little further upstream and fish the same wall but closer to the bridge.

This area still features plenty of snags but is not quite as deep and often the water is a little cloudier, which can help on a run-up tide when everywhere else is clear. The move paid off, with two more small upgrades coming aboard.

Meanwhile, Benno and Wish were fishing an almost identical pattern, also on new Samurai rods, but a bit further upstream towards the bridges where Wish had found some fish on the pre-fish the day before. The plan worked OK, with four fish in the well in the first couple of hours.

However, the quality and quantity wasn’t what the boys wanted, so they made the call to move further down the system. In the end, they landed on the same wall as Lex and Britto and the two groups slowly fished towards each other. It was on this drift that Benno and Wish filled out their limit and also ended up playing doctor and nurse for Britto.

For those who don’t know Britto very well, he likes to fidget, and while he was fidgeting under the coaming of the boat he came across a Megabass Dog-X Jr whose hooks took a liking to his thumb.
So much so that one treble went in well past the barb and rested very close to coming through and touching the nail.

Nurse Lex attempted a removal with the ‘jerk the line while pushing down on the treble’ technique, but it failed and merely served to fire Britto right up. With Wish and Benno nearby (and Wish being a hook-removal expert), the guys decided to change doctors.

A pair of pliers and a mistimed one, two, three and the hook was out. After that ER episode, Wish and Benno moved back upstream, searching for upgrades and picking up a couple more but struggling to find the 30cm-plus fish needed to further lift the already respectable bag.

Back at the weigh-in, Britto and Lex weighed 3.14kg including that big bream of 870g, while Benno and Wish’s bag pulled the scales down to 2.44kg. The bags were enough to secure second and fifth respectively, which was a great way to start our new association with the Frogley’s brands. 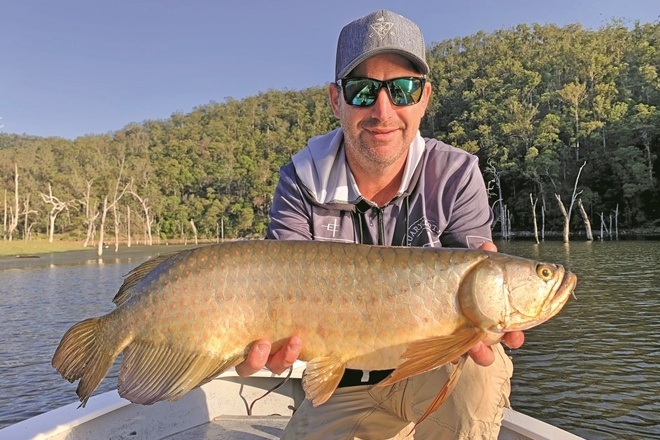 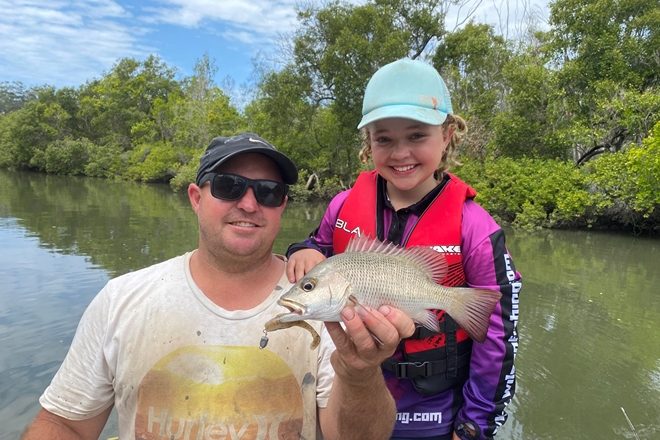