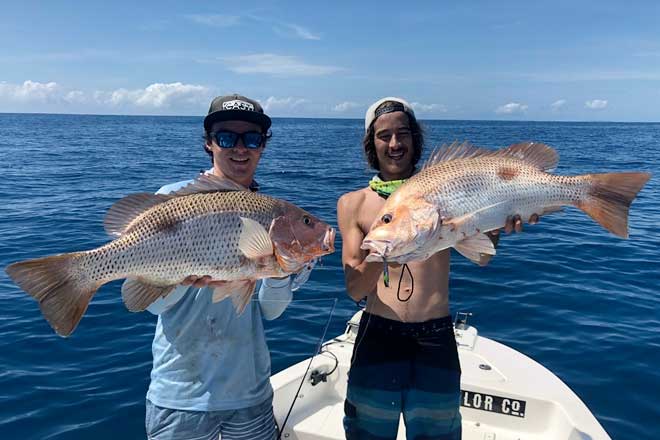 IF I had to pick a favourite month of the year to head out and get into Capricorn Coast offshore action, it would be May.

Whenever I go back through old diaries of past trips, May seems to be a winner on the offshore scene. I’m very pleased to report the weather has been pretty kind of late here on the Capricorn Coast. We went about four months over the warmer months with very few opportunities to head wide. That has all been forgotten, with excellent weather windows presenting themselves. All the reports coming through have been about red fish. More so large-mouth nannygai than red emperor but either is a welcome addition to the Esky.

Nannies can be a real pain in the backside to crack the code on if you’re new to the offshore fishing scene. I remember years ago when I was wanting to put decent nannygai footage together the buggers just seemed to fall off the face of the earth, for a few trips anyway. All my usual nanny haunts were turning up empty. I ended up heading east-southeast to the old Fitzroy River bed to try my luck. To my surprise, large-mouth nannygai were in good numbers around this area and I was able to get all the video required in only a few short hours. So where and what are you supposed to be looking for?

Where to find them

I love flatter ground when chasing large-mouth nannygai. It’s the kind of ground that doesn’t hold much structure. Fern ground, wonky holes and isolated rocks are my go-to areas for good numbers and size of nannies. Unfortunately, these areas can be hard to find. They aren’t generally just lying around in some list of marks you got off the internet or from a mate. Finding these marks requires an understanding of the electronics being used, of what the sounder screen is showing you and of where to begin looking.

It would take an entire publication to go into the nitty-gritty, so for now we shall keep it short and simple. How many times have you read the words ‘sounding at speed’ in an article or heard them mentioned in videos? It’s because this is the number-one rule for finding new ground. It’s amazing how many people still haven’t grasped the concept.

Getting the transducer to read at speed will turn travel time into search time. Keeping a keen eye on the sounder will reveal hidden gems. Some of the minor changes in bottom or bait patches we turn back around on and search through would be overlooked by the untrained eye. Attention to detail is important.

My absolute favourite bait for targeting large-mouth nannygai is live yakkas (yellowtail scad). They can be hard to locate but it’s worth putting in the effort. A simple bait jig is all you need when sitting on top of yakka schools. Generally, yakkas are easiest to catch through winter but we have caught them all year round. Dead yakkas can be just as effective if you can’t keep them alive.

Don’t forget to butterfly them if the whole yakkas aren’t getting results. Fresh squid would be my next choice. If you can’t catch your own squid, then the Lund’s squid found in tackle shops is always reliable. I like to run a set of gangs so I can have hooks running through the entire bait and down towards the bottom. I’ve lost count of the number of nannies that have come to the surface just hanging off the bottom hook. When they aren’t in proper feeding mode, this can be the difference.

If you’re not fishing harsh structure, I like a medium spin combo with a bit of flex in the tip matched to a Shimano 6000-size reel such as a Saragosa. I find I pull way fewer hooks when using this type of gear because nannygai have soft mouths that tear easily. If fishing wrecks and other nasty places, you might not have much choice but to pull out the trusty old broomstick to get them clear of the bottom quickly. The same goes if the sharks are really bad. You won’t bulldog a 10kg-plus nanny to the boat, so if the sharks want a feed you’re in big trouble.

Once a school of nannygai has been located, my best advice is to anchor up on them. If you’re successful getting the spot right, you can have some red-hot sessions. Drifting through these schools often spreads them out and you will only get a few drifts before they disappear. If you’ve got a mid-sized boat that has a bow-mount electric, then you’re ahead of the game. Electronic anchoring is king on the reef, with no anchor hitting the bottom and no chain rattling over the side.

Over the past few months the barrage gates on the Fitzroy River have been opening and shutting pretty frequently. Just when we get some consistency with barra captures, the gates open again. The anglers live baiting seem to be doing best. It will be interesting to see what the conditions will be like for this month’s Frenchville Sports Club Barra Bash, held from May 23-26.

Over $20,000 in cash and prizes is on offer and it’s set to be bigger and better than last year. If you’re chasing any more info, you can jump onto the Frenchville Barra Bash Facebook page or give the club a ring. Fingermark have been biting well and should continue to do so right into June. Vibration-style lures have worked well in the estuaries and the slow-pitch jigs have been the pick for inshore anglers. Thready reports have definitely dropped off as the river has been running dirty and fresh.

At the time of writing we are expecting another decent run in the river from rain out in the Central Highlands. Port Alma has been fishing well for threadies if you are in need of a fix. Mud crabs are a bit sporadic but it’s still worth soaking a pot if heading out on the water for the day. Bream have been around in good numbers. We were surprised by the number of bream on offer during a recent trip to Coorooman Creek. They were hitting vibes and bigger plastics meant for barra. They are cranky little buggers.

During the good weather periods we had a decent run of school mackerel right in close at places like Iron Pot and Ritamada. Even the Keppel Bay Marina has been producing. School-sized spanish have been caught in good numbers around the outer islands such as Barren, Man and Wife and Outer rocks. Keep an eye on the sounder for bait balls and thin fish arches.

Big spanish mackerel have been caught on occasion. Some have been up over the 30kg mark, which is very impressive. The most reliable spots for those horses are up around Manifold and Perforated islands. Trolled ribbon fish have been the go-to baits.

That’s it from me this month. I’m off to prepare for the Frenchy Barra Bash. With the river conditions up in the air and the not-so-favourable tides I think we are in for a tough comp.

Stand by for a report on the other side.