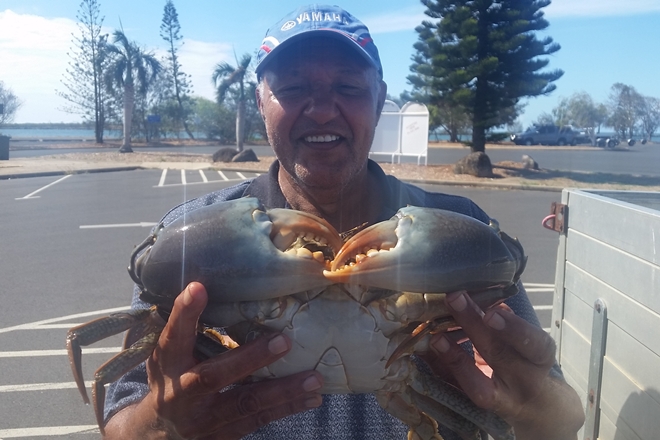 Roy Eggmolesse with a cracker mud crab he caught at Burnett heads recently.

Get out on the water this Australia Day weekend

With the forecast for the Bundaberg area looking good for the Australia Day weekend, it’s time to get out and do what most Australians love to do – be on the water boating and fishing.

For the guys hoping to get offshore for the weekend, the weather is looking fantastic.  Reports from previous weeks have been great with good sized red emperor, coral trout and sweetlip filling the eskies.  As has been reported most weeks recently, the sharks have been getting their fair share.  As most good fishermen know when being sharked and losing fish, just move on and go to your next favourite spot.  Otherwise, the sharks will hang around and take 90% of your catch.  Remember, before heading out always check the latest forecast for an update because the weather can change in a heartbeat.

For the smaller tinnies that want to get out the front this Australia Day weekend, there have been good reports of greys, schoolies and Spanish mackerel all along the coast.  Casting vibes, Flasha spoons and trolling good-sized hard body lures has been picking up the most fish.  If you want to have a bottom fish, casting vibes around the inshore reefs such as the Cochrane Artificial or the Two Mile has been producing good-sized grunter.  If bait fishing, try large prawns.

With the great lot of rain we’ve had over the past week, the mud crabs are in full swing with good numbers being reported, so if heading out for a fish, put the crab pots in first before fishing.  With all the fresh water going into the Burnett stirring up all the nutrients the bait fish have been moving up through the system.  In turn the predatory fish come in following the bait, with mangrove jack, large flathead and grunter on the target list.  Barramundi have also been caught, but it is still closed season for the barra until the 1st of February.  If you do happen to catch a barra, release it as soon as possible.

This little impoundment is a gem for anybody looking to catch a bass or saratoga on a lure, or even to learn how to lure fish.  It’s a great place to take the kids for a bit of time out on the water.  If you like early mornings, cast surface poppers for an hour or so.  As the sun rises move a bit wider along the weed edges casting lipless crank baits or spinnerbaits and this should result in larger fish.  When the bite slows, move to schooling fish and slow-roll soft plastics or blades through the school and back to the boat. This should result in good numbers of fish.  If looking to target saratoga, cast spinnerbaits into the timbered area.

To get that barra fix, Lake Monduran is the place to be, and there has been good reports of size and numbers of barra with ten to twenty fish being caught in a session.  As the dam levels are dropping and the weed is dying off, the water temperature is on the rise.  Barra are moving into the deeper water suspending around tree tops where they feel more comfortable.  Casting suspending lures in and around the tops of trees will produce the goods.  Lures like the Jackall Squirrels, Luckycraft Pointers, B52s and slow-rolling big soft plastics like big Slick Rigs are some of the lures of choice.  With barra fishing, persistence pays off.