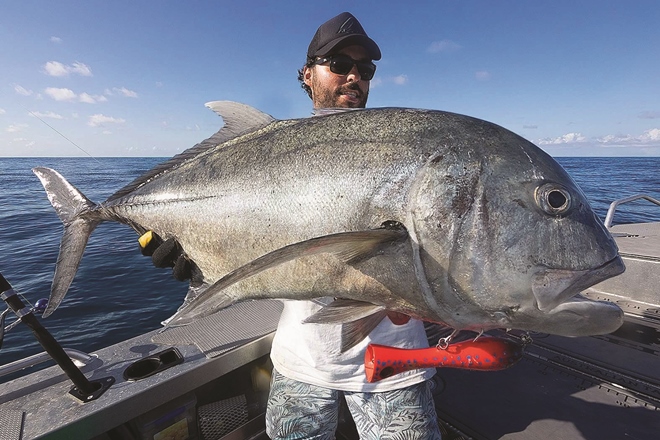 WE finally had a bit of a break in the weather and it coincided with some days off.

What’s a fishing guide to do? Go fishing, of course. After taking an overseas holiday and going camping with the family I was itching to get out wide for great bluewater sportfishing action on giant trevally. Billy Dee from Zeikel Fishing Australia sent me a text message asking how the weather was and when I replied “amazing”, he said he’d booked his tickets and was on his way.

A plan was hatched to run out wide to try to find new areas to fish. Billy arrived the day before we planned on heading out, but the weather looked so nice we decided to go out at 4pm that afternoon and spend the night on the outer reef. Billy recently bought a Stabicraft 2050 Frontier NT fitted with a 150hp Honda four-stroke and it was a great little rig, riding up over the chop on the way out with a bit of an afternoon blow.

We first stopped at the islands to have a cast at giant trevally while waiting to see if the wind would drop off a little for us to venture out further. I managed a nice GT around 20kg and Billy had a couple of swipes and follows but no luck. We decided to head out wide because the wind had dropped a bit, so we ran about 100km out looking for new country on which to find reds.

On the way we kept an eye on the sounder and found fantastic pinnacles and rocks but unfortunately no fish were showing or biting, so we kept pushing out.

After sounding all over new country for no result we were both quite tired and decided to anchor behind a coral cay for the night. As we were looking for an ideal anchorage we came across good bommies in about 30m of water where we caught a variety of sweetlip that gave us a bit of fun for an hour or so before we finally anchored and crashed for the night.

We were up at first light, pulled up the anchor and had a few quick drifts over some coral bommies where we managed to jig up a few trout on micro jigs. We then headed into some other coral cays to try to find bait schools around which to throw poppers and stickbaits for giant trevally and spanish mackerel. Upon coming to our first coral cay, we immediately found masses of bait schools balled up on the surface and showering everywhere.

We knew we were going to have a fantastic session. Our first casts with poppers resulted in a double hook-up on giant trevally and we landed an unbelievable 15 GTs in about an hour and a half along with numerous hook-ups and dropped fish. I even got busted off in the reef by a big fish. Man, it was a hot session! Even though so many fish were around, if we didn’t land our poppers right in the middle of the fusilier schools we wouldn’t get a bite.

We also found after numerous hits and hook-ups on the surface poppers the fish quietened down a little, so I changed to a Lively Lures Slick Stick and was rewarded with immediate success. I captured quite a few giant trevally on the Slick Stick and even had one bust me off on the reef, losing my favourite fusilier-coloured lure. As the tide eased to the change, the fishing really slowed and to be honest I think Billy and I were relieved because our arms and hands were killing us after fighting big GTs.

It was great to fish out wide and enjoy such fantastic surface fishing in new country. I hope this inspires you to get out and do some trailblazing of your own, finding new areas in which to try new techniques.