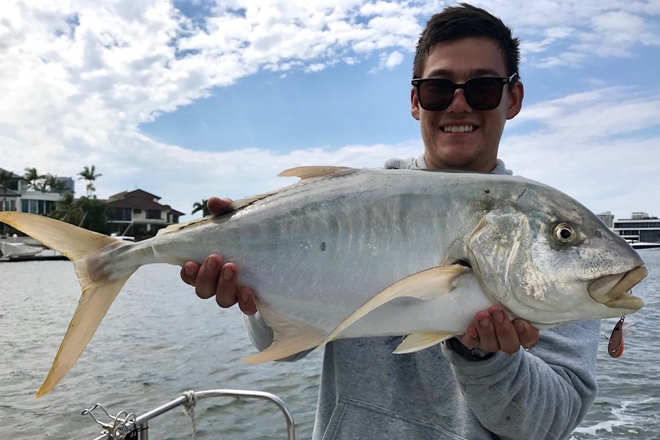 Trevally are a formidable opponent on light tackle. Kai did well to land this 68cm golden trevally using an Ecogear vibe.

HI everyone, I am thrilled to become a regular contributor to Bush ‘n Beach, a magazine I have been reading for a long time.

I have been working in partnership with Brad Smith doing Gold Coast Broadwater and estuary charters for over five years. Smithy has been guiding for more than 25 years in the Tweed River and on the Gold Coast, which makes him southeast Queensland’s longest-operating fishing guide, and he’s one of the magazine’s longest-serving writers.

The next five months present an exciting time in local estuaries to target one of our favourite fish, the mighty mangrove jack. Until sustained, heavy rain breaks the prolonged drought, fishing at night will produce the best results. The water in most places is relatively clear, making the fish wary.

If you are lure fishing during the day, you need to aim casts as close to structure as possible to entice a strike. Focus on areas such as bridge pylons, rock walls, moored boats and pontoons. Practice makes perfect – they’re not called ‘the fish of a thousand casts’ for nothing. You’d be surprised how widespread big jacks are in our rivers. The big red dogs can be holding anywhere with structure in our massive man-made waterways.

Printing and marking a map where you have caught or seen jacks is a useful exercise that can prove useful when next planning a jack trip based on tides, wind direction and water temperature (preferably 26C or above). Jacks can be caught on lures, but for a novice angler, bait gives the best chance of snaring one. Live bait such as mullet and silver biddies can be caught with a cast net in the Nerang River canals.

My favourite and most reliable method for enticing jacks is to catch winter whiting on blade lures in the Gold Coast Broadwater. This type of whiting has no size limit, is widespread throughout the Broadwater in depths ranging mostly from 3-8m and is an aggressive taker of lures. Jacks love them and they stay alive well in an aerated bait tank.

Along the edges of the main channels is a great place to start when looking for winter whiting. Search for them on your fishfinder – they show up as horizontal lines or patches just above the bottom. Drop your lure straight to the bottom and drift at one knot or slower with continuous short, sharp lifts of the rod. This will trigger a chase and grab instinct from the whiting as the lure gets away from them.

This tactic works brilliantly with a lot of species because fear of missing out makes them chase and compete with each other. The added benefit is you are covering ground and finding fish with lures by imitating the natural way a baitfish or prawn would move with the tides. Be sure to distinguish between winter and sand whiting, as sand whiting have a 23cm minimum size limit in Queensland.

The best way to tell the difference is winter whiting have a rounded dorsal fin on top, while sand whiting’s dorsal fins are concave. Often the bigger sand whiting will be among schools of winter whiting in the deeper water, especially after heavy rain or around spring tides when they spawn in the Gold Coast Seaway. The winter whiting usually measure between 15cm and 30 cm and if you catch enough of them they make a great feed. Another common daily by-catch while targeting whiting on vibes is arrow squid, which are also good to eat or can be used whole as bait for jacks and other large predators.

If you can’t get live bait, try strips of mullet or bonito fillet, which also work well for mangrove jack. The setup for live baiting jacks around heavy structure is quite simple. For bigger jacks you’ll need a 7’, 6-10kg rod (or stronger) and 6000-8000 size reel spooled with 50lb braid. Fill half the spool with mono line first so you’re not wasting too much expensive braid.

Then join an 80lb shock leader to the braid with an FG knot. The length of your leader depends on where you’re fishing and how heavy and sharp the structure is. I run anything from 2-6m long.

Use a running ball sinker with enough weight to hold the bait on the bottom, then tie a strong swivel and half a metre or more of leader to either a single Mustad Hoodlum hook or a Snell trace if using bigger baits. We encourage catch and release of mangrove jack because they are such magnificent-looking and fighting fish.

Apart from jacks, sand whiting and giant trevally will be prevalent over summer. The best baits for whiting are live yabbies and bloodworms. Yabbies can be pumped at low tide on the banks along Southport and Labrador.

Night-time is most productive for whiting, particularly opposite the Council Chambers in the Nerang River and around the corner heading upstream. I have also caught good numbers and sizes in the evenings along the Southport and Labrador shoreline. Use size 4 Mustad bait-holder hooks, big enough running sinkers to hold bottom (2 to 4 ball) and 2m of 6lb fluorocarbon trace with 6lb braid main line.

If you don’t get bites, keep moving and anchoring 500m elsewhere as whiting are nomadic grazers. Remember to not strike too early. You want to let them swallow the bait before setting the hook.

Trevally are pelagics and can bust up anywhere at any time. I always have a rod rigged and ready with a soft plastic or metal to cast and retrieve at medium to high speed. Trolling over shallow sand flats (1-3m depth) with hard-body minnow lures such as Pontoon21 CrackJacks and Savage Gear XDR 3D 5cm Shrimps is a great way to encounter these hard-fighting brutes.

During the day we have an absolute ball using lures in the Gold Coast Broadwater and Nerang River. Two go-to lures for me are Ecogear ZX40 blades and Samaki Vibelicious 70mm soft vibes. Use natural and non-UV colours in clear water on sunny days and flashy, darker, UV colours in dirtier, deeper water or cloudy weather.

Both are deadly lures that have caught over 30 species of fish on my charters including arrow squid, flathead, mulloway, bream, tarwhine, tarpon, tuskfish, flounder, tailor, sand whiting, squire and many others. All you need to get among the action is a 7’, 2-4kg rod, 2500 size reel spooled with 6lb braid and a metre of 10lb fluorocarbon leader tied on with an improved Albright or FG knot.

The method is the same as I mentioned for winter whiting – drifting and tea bagging (slowly lifting the rod) in shallow or deeper water or casting and slowly hopping the lure along the bottom if the drift is slow. To book a charter with Brad or I or for any fishing-related questions, SMS 0432 990 302 or email fishingwithclint@gmail.com

Peak holiday season is starting. It’s not easy but try to be tolerant at boat ramps, respectful of speed limits in the waterways and offer to help newbies when they need it. We were all in their shoes once.

Have a fun, happy and safe Christmas and New Year! Until next time, tight lines.