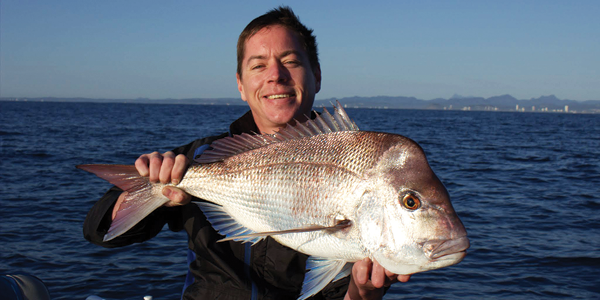 Ryan Hanson boated this ripper snapper off the 24s.

SPRING is here and the fishing has been keeping Gold Coast anglers busy. Offshore anglers have been getting a few good size snapper around the local reefs and typical baits of pilchards and squid have accounted for most of the fish.
Fishing with small blades has been very successful.

I scammed a lift with good mates JB and Brad recently and witnessed first-hand how successful using blades is. While I had a few touches on my soft plastics, the boys were hooking up regularly. While no record breakers were caught that day, it really showed me how the new micro jigging craze is accounting for a lot of fish.

As usual, with any new craze comes a whole host of gear to go with it. While the reels could easily cross between soft plastic fishing and micro jigging, the rods used for jigging are much shorter. It’s just something else to spend your hard-earned on I suppose.

Snapper will continue to be caught for a few months yet, with September one of the best for them. While the days will get a bit warmer, the water will remain cool in close and September traditionally sees a good spawning run of larger snapper in close.

We just need the weather to play ball. I prefer a light northerly blowing when fishing for snapper, and I find it easier to drift or float line when wind and current are moving in the same direction. With a mini renovation completed on the boat, we are champing at the bit to hit the water hard for some awesome fishing.

What started as a replacement of the fuel tank cover ended up being a full recarpet, rewire and reconfiguration of the seating. Gone are the pedestal seats and now we have a pair of great stainless seat stands that we can fit Eskies under. It’s been a steady work in progress, with very limited time to spend on the girl.

Because it’s taken so long, I’ve had to be content to listen to my son Mitch talk about his fishing trips in his tinnie.
The estuaries have fired up over the past few weeks.Excellent whiting and flatties are being caught in the rivers and creeks. Several big old girls have been hooked on light gear intended for whiting and have rubbed through the leader, making for some very disappointed anglers.

Tallebudgera Creek has produced quality fish around the dredge. It is like a berley machine on steroids as it stirs up the bottom. Big schools of luderick have been moving through as well, with a number of fish going well over a kilo.
Luderick are great eating if they are cared for correctly.

You must keep them alive until you are ready to go home, at which point they should be bled and promptly gutted and cleaned of all the black stomach lining. If you fail to do this, you’ll end up with a very strong tasting fish, which some people don’t like.

Around the Tallebudgera breakwall and at Currumbin Flat Rock, stonker bream have been caught as well as tailor and a few salmon. While they aren’t good on the chew, the salmon are fantastic sportfish, with hard and dogged runs meaning they make a good account of themselves in the surf.

The new boat ramps on Currumbin Creek are just about completed. It’s good to see some funds being spent on facilities for fishers and water lovers alike. On the local bars, the Tweed is still fairly shallow, with waves standing up on the outer bank.

Currumbin Creek Bar is very choked up, with a small drain close to the wall and a good hole down to about Laceys Lane.
Tally is also choked up but should improve as the dredge gets more water moving over the bar. The Seaway is its normal self; just ensure you take care to the north over Deadmans Bank.

Bent rods to you all.

Heath has been fishing since the age of three and grew up fishing the mighty Georges and Hawkesbury rivers.
Previous Jew and threadfin in Brisbane River
Next Top marks for 610 Trident Hard Top