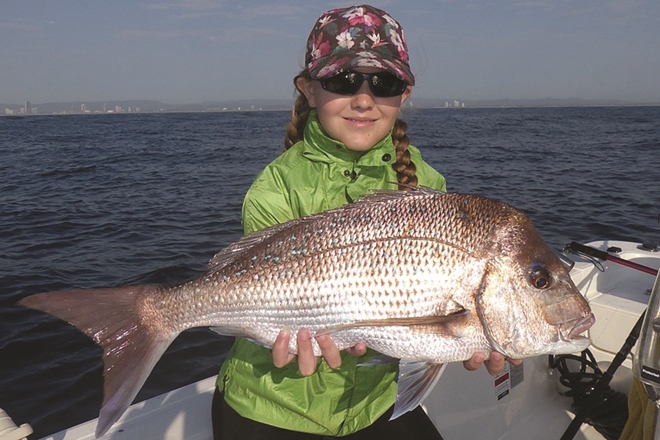 Rebecca hooked her large snapper by float lining a pillie in 40m of water out from the Seaway.

WHILE our ‘snapper season’ has passed, don’t think snapper can’t be caught until next winter.

Most fishos start getting mackerel fever at this time of year, though I still prefer to go out and fish for Gold Coast snapper all through summer. Though not as many of those monster knobby snapper are around, it is still possible to get a good feed of 40-60cm snapper from the local reefs. Nothing different is required to your normal snapper fishing methods – just anchor up and use plenty of berley to attract any fish in the area to the back of your boat.

The only difference at this time of year is a stronger current, which simply means using a slightly bigger sinker to get to where the fish are. I prefer to go a little wider than the closer mackerel grounds. Around the 40m depth line is quite good and a steady flow of berley could attract mackerel to your area too. The first sign of this will be getting your soft plastic or bait bitten off.

Ganged hooks and a pillie for bait may see you land a couple of mackerel. If the mackerel persist, a small piece of single-strand wire above the hooks will prevent bite-offs but slow the snapper bite. It’s best not to put wire on until after you’re sure mackerel are around. A live yakka or slimy under a float out the back can snare the mackerel too.

For Gold Coast snapper, 20lb leader is fine for most presentations, but for the live bait rig I’d use 40lb main line with 69lb single-strand wire leader to prevent being bitten off. I will discuss targeting mackerel in coming months as they get more plentiful after Christmas.

This time of year will also see smaller but legal Gold Coast snapper in the Broadwater. Anywhere that has a rocky rubble bottom is worth trying. The Seaway and the channel to the east of Sovereign Island are two good locations. Large yabbies on a 1/0 hook or flesh baits would be best.

It has been a great start to our Gold Coast whiting fishing. The best thing about catching whiting is just how consistent and predictable they are. Right on schedule, they turned up between Isle of Capri and Chevron Island in the Nerang River for our night sessions. I wish all species were as regular as whiting. While I don’t normally suggest one tide over the other, this year I’ve noticed the run-out tide has been much more productive than the run-in. On more than one occasion we have struggled on the run-in but once the tide turns to run out the whiting have come on the bite.


I am not sure where they are feeding on the run-in tide but I’m still looking. Another thing that has been noticeable this season is the week between the new and full moons has fished as well, if not better, than the weekend around the full and new moons. While Gold Coast whiting will eat a variety of baits as long as they are live, some baits out-fish others two or three to one. Yabbies and beach worms will get you a feed but much better baits are available.

Recent trips have shown Cribb Island bloodworms are better than yabbies or beach worms, however two baits are even better. Redcliffe Rockies, which are a type of bloodworm, and mangrove bloodworms, will out-fish any other bait in our local rivers. The reason is quite simple: these two worms are thinner, softer and juicier than other baits and easier for the whiting to eat. It’s a bit like scoffing down a chocolate compared to licking a lollipop for 10 minutes.

As the weather warms, it’s time to start chasing some of our more popular sportfish such as bigeye trevally, giant trevally, tarpon and even the odd tailor. Tarpon are most likely to be found in the early mornings and late afternoons into the evenings at the hole at the top of the Coomera River and around well-lit bridges at night. A 3” soft plastic on a 1/8oz jig head with a 1/0 hook is a consistent catcher. Tarpon tend to play with a lure before aggressively taking it.

GTs are best targeted in the Seaway and around the bridges in the Nerang River of a late afternoon. Use 5” white Z-Man soft plastics on 3/8oz or 1/2oz jig heads with a 2/0 hook in the Seaway. In the estuaries you can try a variety of lures including surface walkers, poppers and soft plastics. Bigeye trevally are more of a night-time option and can be found anywhere lights are shining on the water such as bridges, marinas and jetties. We have been doing OK at night in the main channel of the Broadwater from behind Sea World down to the Sundale Bridges.

Reasonable tailor for this time of year have been taken around the pylons of the Sundale Bridges, with the pedestrian and tram bridges adding extra structure. Good size jewfish are in the Seaway around the pipeline, with the better catches coming on live yakkas and pike. The pike can be caught on small hard-bodied lures from the weed beds in front of Biggera Creek.

Sand crabs are a better option than mud crabs in the Broadwater and rivers, with the mouth of the Nerang River and the Aldershots area worth trying. The best crab baits are whiting frames and mullet, with chicken carcasses and catfish also popular. If we get decent rainfall then the mud crabbing will improve.

Wayne started fishing seriously 22 years ago, and 19 years ago moved to the Broadwater region on the Gold Coast because it had the best and biggest whiting in southeast Queensland, which is still true to this day. He works most Saturdays at Oxenford BCF and spends almost all the rest of his time fishing and crabbing the Broadwater and the rivers that run into it. Since moving there he has discovered that despite a lot of boat traffic it is still a great place to fish, with an amazing variety of species to catch.
Previous How to anchor your boat correctly
Next Suzuki Marine unveils lightweight DF100B