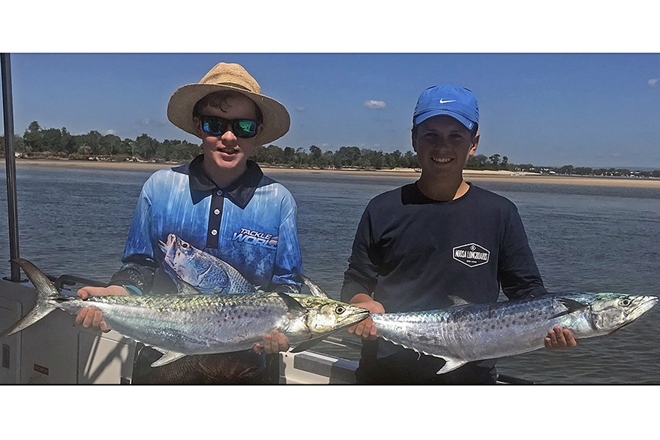 A couple of spotted mackerel from North Reef. Photo: www.fishingnoosa.com.au

With the wind and swell finally dropping over the weekend in rare good conditions, plenty of anglers made the trip over the bar and headed for the reefs. Sunshine was the first stop for most with plenty of good fish on offer including coral trout, grassy sweetlip, squire, pearl perch, good maori cod and a few sneaky spanish mackerel. Most anglers opted for the good old paternoster rigs with  4/0 to 7/0 hooks, for those that had live baits, a running ball sinker with 60lb fluorocarbon leader and a couple of snelled 7/0 Hoodlum hooks have been slaying the Trout. Those that fished Jew Sholes and Halls Reef also did well with quality sweet lip, snapper, cod, longtail tuna and spanish mackerel. North Reef has also been firing with some bigger snapper hitting the decks with the best fish coming on the evening bite. Try fishing a floater in a good burly trail, don’t overdo the burley as you will bring in the sharks and it will be impossible to get anything past them. For the lure anglers soft plastics and micro jigs have been outstanding on the morning tide, make sure you are using a heavy enough gear to get to the bottom, a good scale is 1 gram per meter using braided lines and depending on the run. Some bigger boats did the run out to the banks with some larger snapper, pearl perch, cobia, jew and cod all accounted for.

The mornings on the Noosa River have been spectacular over the last week with some great condition teamed with the incoming or high tide. Trevally have been in great numbers with giant, golden, big eye and even diamonds all feeding on the plentiful bait that is in the rivers at the moment, fishing surfaces lures has to be the best fun you can have standing up and seeing those surface walker getting blasted from below is heart stopping, try walking the Atomic K9 walkers across the top with the odd pause, or give the Nomad Chug Norris poppers a go, these popper push plenty of water when there is lots of action. There have been some thumper flathead taken in the last week with many fish taken on the new Bio Tough range from Squidgy. Entice Assault vibes and Samaki thumper soft vibes have also been working well along deep gutters around the river mouth on the run-out tide. Whiting and Bream are also plentiful in the river, try the river mouth, Gympie Terrace, the sand bags and dog beach. Bream are falling for fresh mullet strips, whitebait, squid and prawns. Whiting are being caught on beach worms using size 4 Blood worm hooks and fine 6lb Leader with additional red tubing for extra attraction. Mangrove Jack are still about with most fish coming at night, fishing the structure that lines the river has been where most of these ambush predators have been coming from.

For those that love there beach fishing, this rough weather we have had over the last month or so has greatly improved what is coming from the beach, some great gutter have been created and there are plenty of new inhabitants call them home. Teewah up to Double Island has been fishing well for flathead, whiting, dart and the odd tailor, some good jew are also being taken with the new moon. The rocks at Double Island has also been a good spot to target large bream and tarwhine with strip baits of mullet or bonito the perfect bait. On the southern beaches from Peregian to Sunshine plenty of quality whiting have been taken on worms and pippies.

In the fresh water; smaller spinner baits cast onto the weed edges on a medium paced retrieve has been working well for bass In Lake McDonald.  Fishing the surface is working well during low light periods and on calm water sections in Lake Borumba. Well-presented surface lures including, Zip Baits Fakie Dog, Jackson Risk Bait and larger walkers including the Megabass Dog-x and Duo Realis Pencil have all worked well. Saratoga have also been taken in the upper reaches of Borumba with some reports of toga in the Mary River.