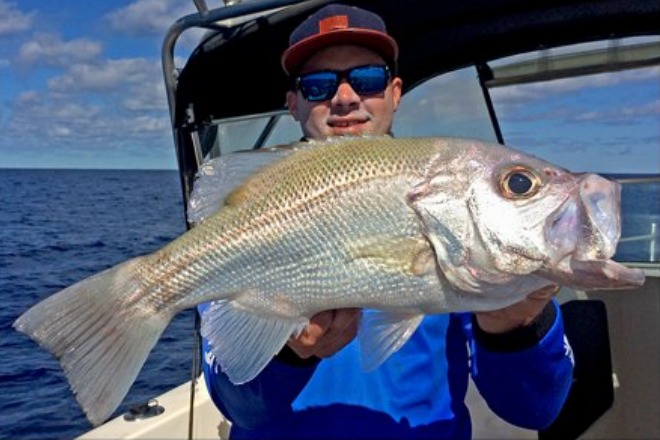 There have been some great tailor coming into the Noosa River and one of the best ways to target them is on  surface lures, early morning and late afternoon has been the prime time.

Don’t forget to upsize that leader material as tailor are notorious for bite offs. Lightly weighted pillies have also been effective baits. Golden, diamond, big eye and giant trevally have also been making there presents felt around Woods Bays and around the back of the sound. Micro jigs, 3inch plastics and surface lures like the Jackson Ebi Panic 70 have been effective. Larger sized bream are in good numbers in the river as the water temperature drops. Fresh flesh baits, as lightly weighted as practical has been the best approach. Quality queenfish are also amongst the tailor and trevally. Good numbers of small jewies are in the river, plastics like the Fuze 80mm Fin Bait fished near the bottom in the deeper sections of the ski run and Tewantin area have seen some good results. Live baits and drifted whole fish baits have been accounting for some quality flathead throughout the system. Fishing in a deeper stretch of the river on an outgoing tide has been the most effective.

On the beaches; Quality tailor are really starting to make an appearance, fresh flesh baits like mullet and tuna have been working, as well as the good old pilchard. Up on the Noosa North Shore, fish the deeper gutters with the area north of Teewah seeming to be the most productive. Good numbers of bream are also in the gutters with the top of the tide the prime time. There are still plenty of dart in close, perfect for the kids.

Heading offshore; Halls reef has seen some good sized spanish mackeral with live yakkas the perfect bait for the job. Jew shoal and Sunshine Reef are still producing the good mixed reefies like cod, sweetlip, squire and some stand out coral trout. The coral trout have been best targeted using live baits. For those that have not been able to acquire live bait, pilchard and squid baits fished hard to the bottom have also worked well. Spanish mackerel have also been present around Sunshine reef eating 50-80gram slugs on a fast retrieve. Out on Chardons Reef, jew, squire and pearlies are keeping anglers busy. A bit further afield, the reef off Double Island have seen some outstanding red emperor, snapper, pearlies and amberjack.

For the fresh water anglers, good sized bass have been around the bubble trail and main basin of Lake McDonald. Plastics, tail spinners or vibes hopped along the bottom have been encouraging them to bite.