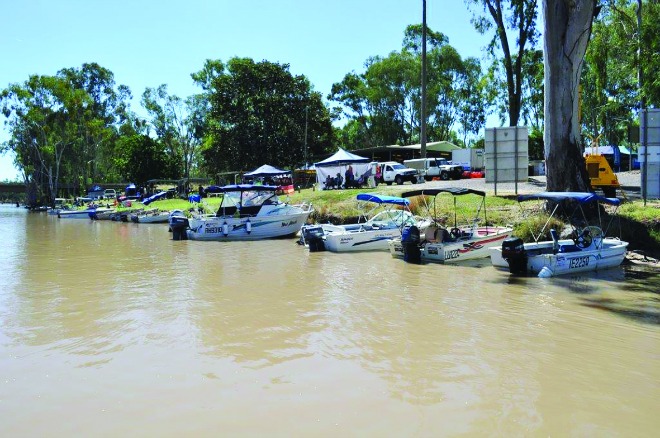 Boats galore on the Dawson River at Moura.

THE success of a fishing trip is usually gauged by how many fish are caught.

I have to admit to often using this statistic as an indicator of how well a trip went. For me though, this is usually after a trip that has been the result of some intense planning and long-term forecasts of weather, tides and so on.

Since moving to Townsville three and a half years ago, I haven’t had much of a chance to just sit and relax and enjoy all the other things that make fishing the best sport in the world. The first morning I was at the Moura Muddy Water Classic this year I went through a well-rehearsed routine that has evolved over almost a decade of going west and participating in this inspirational event.

But there was a change or two this year. Normally when I arrive at the riverside campground, I unload my gear from a friend’s car who has driven from Moura to Rockhampton to pick me up from the airport and then drive the two hours back to where the competition is held. Then, after catching up with everyone for a few minutes I stash my gear in a pre-erected tent that’s decked out with a swag and ready for me to crash in after the night’s festivities.

This year though, I rolled out of the car and was directed to a large, late-model caravan with electricity and all the mod-cons. Such is the nature of genuine country people, and I’m always amazed at the lengths these huge-hearted people will go to just to make my stay as comfortable as possible. It’s an amazing community.

While the sounds of the bush were still clearly audible, you would never have guessed that my mobile Hyatt was on the edge of a sea of tents, swags, caravans, campers and rooftop tents. Wandering over to the camp kitchen at 4.30am to make a nice hot coffee and sit on the bank of the Dawson River, I was surprised that the grounds were so still and peaceful in the middle of hundreds of people.

If you’ve never ventured out to Moura or the Dawson, you have to put it on your bucket list.

It’s one of those Aussie bush environments that, while not ‘remote’ so to speak, is far enough away from major population centres that you feel as if you’re in the middle of nowhere, and the people are truly country Aussies.

The main campground is situated right next to the highway and apart from the odd road train and grey nomad, doesn’t see much traffic for a main road. You can camp a fair way from the road, so it’s no real problem, and for some people who aren’t used to or comfortable with the total silence of the more remote bush, the location is like a bit of a security blanket. You can also find other campgrounds in the area that are a bit more off the beaten track.

The Dawson River is home to a massive population of one of Australia’s most incredible sportfish, the saratoga. Of course, other species are available as well, with Barcoo grunter or jade perch and yellowbelly commonly taken by bait fishers. The odd barra is also left over from past stocking efforts. Fork-tailed catfish and a few other small natives call this stretch of water home and make up a fair percentage of your catch if you’re bait fishing, but it’s the saratoga that are the jewel in the crown for the Dawson.

A water release had occurred just prior to my visit, which stirred the water up considerably. While not quite thick enough to plough, it did affect the fishing. Thankfully, saratoga have amazing senses, and even in the muck a few found the lures, but hook-ups were hard to make stick.

Only specific lures will work here when the water’s so muddy. A great option for when it’s murky are spinning bladed lures. If I’m going to use any spinning bladed lure, whether it be up north for sooties and jungle perch or down south for Murray cod and bass, there is only one brand I’ll use, and that’s Aussie-made Bassman Spinnerbaits. The 1/4oz Tandem or Double Colorado models work a treat on the toga, as do the Beetle Spin arms when rigged with an appropriate head weight. No matter which model you choose, just make sure a stinger hook is part of the rig because the bony jaws of saratoga can be hard to stick to.

The pre-rigged Bassman Pup comes pre-rigged with a stinger but I like to add a soft plastic trailer too, usually in the form of an Atomic 3.25” Paddle Tail Plazos. Small hard-bodied divers such as the 52mm Halco Scorpion are another must-have in these waters and are best flicked on a spin rod because they’re fairly light.

Due to the thick overhanging bushes and trees that lean out over the water and hold a lot of insects and bugs (high on the saratoga’s food list), a soft-tipped baitcaster spooled with 5-10kg braid is my favourite setup for being able to punch low, accurate casts way back in the shadows where your target lies under or right next to submerged branches and logs.

Early morning and late afternoon are the best times to search for active fish, but if the sky is overcast, the bite can last all day. Even in the middle of a bright sunny day a percentage of fish will still feed freely, but the peak bite times are low-light periods.

If you’re into long, white sandy beaches and snorkelling around coral-encrusted reefs in crystal-clear waters, then Moura and the Dawson may not be your dream location, but if you want to experience the inland freshwater habitat with its wide variety of wildlife and the unique ambience found around this slow-flowing river, then I suggest you get your bum out there. A water clarity gauge will soon be added to the Moura Muddy Water Classic webpage, and will provide an indicator of the current water conditions.

Congratulations to those who landed fish in the appropriately named comp. Many thanks again to Ken and Zelma and the whole team who made my stay such a joy. You can’t hold a well-oiled event such as the Muddy Water Classic without sponsors, so hats off to those who dug deep in the current economic climate.