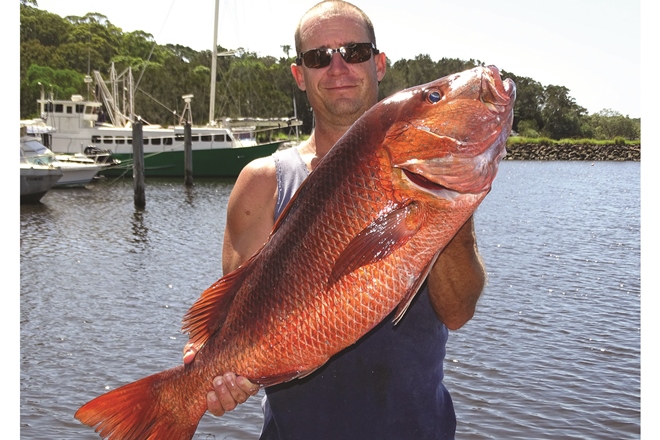 The author finally got a big version of his favourite fish.

FINALLY we have had some kind weather that has allowed boaties to head as wide as they wish.

The continental shelf has been a hot spot lately, with many fishos keen to get back into deepwater delicacies. I haven’t headed out quite that wide but have had a number of great trips anywhere from the local reef to the 50-fathom line. Later this year I will bring up the 20-year milestone of writing for Bush ‘n Beach.

Back when I started, pretty much all I wrote about was mangrove jack. That’s because all I fished for was jacks, from one end of the Tweed River to the other. These days they are still my favourite fish but I don’t get much time to chase them in the rivers. I had always wanted to catch a big reef jack just to round out my jack fishing experience. While I had targeted them from time to time, I’d had no joy. I have absolutely no doubt I’ve hooked them over the years but been busted off. I spent many a night on Nine Mile Reef trying to catch one and landed all sorts of hard-fighting critters including the jack’s close cousin, the red bass, but never a jack.

You might remember that last year Lewan came out on the boat with me and hooked a reef jack of about 4kg, which isn’t a monster, but still would have done me. Between Byron and the Tweed are two main rocks that consistently produce big jacks, and that is the aforementioned Nine Mile Reef and also Windarra Banks. I’ve also heard of them being caught at Five Mile, Fidos and Deep Southern reefs and the 45s wide of Windarra Banks. Chincogan Reef off Kingscliff is another spot where I have seen them speared but not line caught.

Anyway, as you can see by the photo, I finally got one. I was catching a few yellowtail kingfish on 50lb line, which I consider very sporting for kingies.

I landed a couple and had several wipe-outs when I hooked what I initially thought was just another small kingfish. But then I looked over the side and saw something orange coming up. Perplexed, I gave the handle a few more turns and saw a mangrove jack of 4-5kg nearing the surface.

In that split second when I recognised what the fish was, the hook pulled and the fish swam back to the reef. I was pretty disappointed, but what can you do, there’s always the one that got away. So I kept on fishing and musing over how close I had come.

About an hour and a couple more kingies and an amberjack later I hooked up again. It was a torrid battle to keep the fish out of the reef but then again isn’t that always the case with a kingfish? While the initial fight was hectic, once I got the fish off the bottom it started coming easier than a kingy usually does and I dared to think it might be another mangrove jack. I backed the drag off and pumped as smoothly as I could. The water was fairly dirty but eventually I saw exactly what I wanted to see: orange! And soon it materialised to vibrant red.

Surprisingly it had bright white vertical stripes, something I had been told was associated with juvenile mangrove jack. This was no juvenile and it was the most nervous gaff shot I had made in a while. I had no problems though and once on the deck I even gave a few silent fist pumps. Later it dragged the scales to 9.4kg, so I was a pretty happy chap.

In other news, our mackerel woes continue. Fish are out there some days but it’s been lousy really. Heaps of mackerel are being caught further south on the NSW coastline, so hopefully we get a hit as they travel back north. Black marlin seem to be on their way north and I hooked two in two trips. One would have been about 70kg and the other maybe 80-90kg. I’ve got no interest in fighting marlin of that size, so I just broke them both off, but they sure are a majestic sight when they take to the air near the boat.

Wahoo haven’t really made an appearance this year and little yellowfin tuna are scarce too. I’ve managed a couple of cobia in the past month, which is good because I was beginning to think they were extinct. On the reef front, jew and squire are getting around on the shallow reefs. The 50s are surprisingly quiet for pearlies but several squire are out there.

As I said earlier, the shelf got a good workout for a few days and produced the usual tasty bar cod, bass groper, blue-eye trevalla and other ooglies. In the rivers, a stack of mullet are coming downstream and getting ready for their spawning run, which means it’s time to get the jewie gear out and have a go. Tailor are patchy but hopefully their numbers will improve this month.

Mangrove jack will be caught off both the Tweed and Brunswick walls this month. A lightly weighted pilchard is as good a bait as any for the red fish that hang about the walls. Whiting and mud crabs turned it on in May last year in the Brunswick River, so hopefully they do the same this year. The evenings and nights are cooling now and it’s time to start sneaking around after sunset looking for a feed.