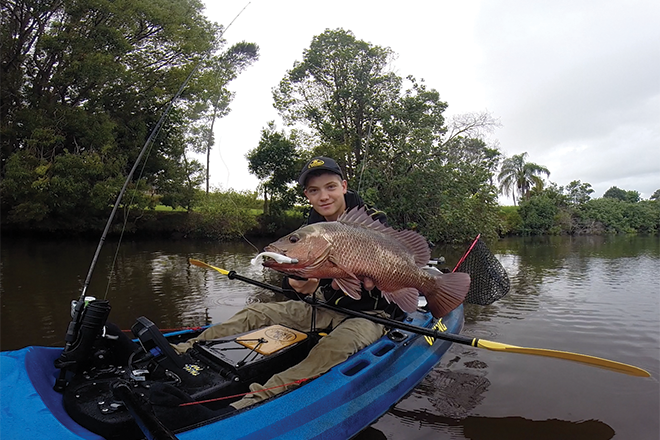 The author held a 49cm mangrove jack caught from his kayak.

Targeting Mangrove Jack from a Kayak

WE all know that targeting mangrove jack can get the heart racing and blood pumping, however fishing for them from a kayak is a whole different story. It was a Saturday morning, the tide was rising and I was ready to target hard-fighting fish.

I had recently upgraded kayaks to a Viking Profish GT with a new rudder system and I was as keen as ever to go fishing. I decided to target mangrove jack around natural structure in a saltwater creek.  The night before I had rigged up two rods; one with 15lb braid and leader and the other with 10lb braid and leader.

My lures of choice were something that would imitate bigger baitfish. I feel that if you are chasing quality fish, you should throw quality lures to enhance your chances.  I chose a Z-Man 4” DieZel MinnowZ in Pearl colour. This lure is my favourite for this type of fishing because mangrove jack are aggressive predators that ambush baitfish, which are accurately represented by the soft plastic.

Jacks will hide behind fallen trees, rock walls and any structure that can provide them shelter. Once they see their prey swim past they will aggressively dart out, eat it and then rush back into shelter.  This feeding style is part of what makes them addictive fish to target. Many anglers spend countless hours on the water chasing the elusive jack, and it’s very common for them to go home without a hit or a fish.

I headed out on an overcast Saturday morning at about 6am. My plan was to find fish by using my new Lowrance Elite-4 CHIRP fishfinder, however while paddling I spotted a very nice snag surrounded by mangroves and rocks. I knew I should definitely have a cast before paddling on, so I punched in a long cast directly towards the rocks and slowly retrieved the 4” DieZel MinnowZ.

After just three turns of the handle a fish crunched the lure and instantly tried to dust me back into its territory. 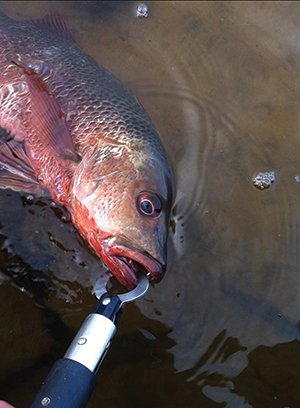 I knew exactly what I had hooked and had deliberately set my drag tight so there was no way this fish was dragging me into its home. This jack was doing everything it possibly could to snap me off, however the rudder system attached to my new kayak allowed me to easily manoeuvre my kayak and the fish out of danger.

After a battle and a half I was happy to see red in the net. Targeting these beautiful specimens is extremely fun and the best part is you don’t always need a boat or kayak to chase them.  I have caught countless mangrove jack just by walking canal retaining walls and flicking plastics. Imitating the bait is the key to success, so if you get a chance, have a glance at what bait is kicking around the systems at the time and match it as best you can.

I find plastics of 2”-4” produce the best results. Generally I prefer to fish with plastics over hard-bodies, but in saying that, hard-bodies are dynamite on jacks too. Many different brands and types of soft plastics are on the market and choosing the right one for the situation can markedly improve your chances of getting a bite.

I find the Z-Man 3” MinnowZ and Bash Lures Ribbon Tails work well. Both have a great presentation in the water.  Successful techniques for mangrove jack can include anything from a slow wind to cranking the lure fast and making it look like a fleeing baitfish. This sometimes gets the jacks fired up and results in them swimming out and smashing your lure.

I have caught jacks while fishing for other species around bridge pylons, which can be very exciting but also costly when the jack peels off your light line and wraps you around a snag. Having lighter leaders in these situations can be great for getting a bream bite, but you need to be prepared when fishing in jack country.

By-catch is common when targeting jacks, and often trevally will grab your lures. During winter, a lot more trevally will be active throughout the systems compared with mangrove jack. The best time to target jacks is normally the warmer summer months, however don’t put your jack gear away just yet.

They will still be around in early winter, especially considering how hot autumn was, so don’t hesitate to chase jacks on a warm winter afternoon.
I have caught many jacks in winter, so it’s worth a shot.