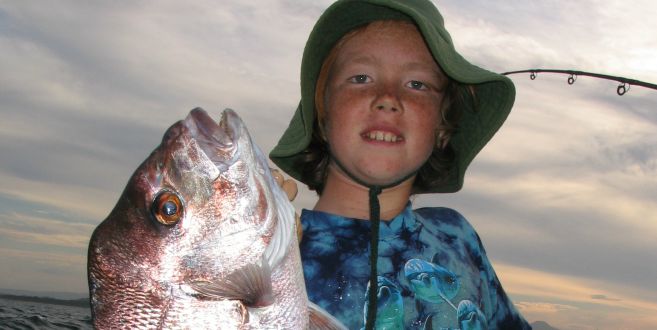 THIS month’s fishing has been fairly productive on the Tweed Coast, especially in our rivers and creeks.

Here on the Brunswick River the good run of whiting continues, with both a high quantity and quality of fish. A few flatties and excellent bream are present as well. Bream are still in better numbers on the Tweed though, with the Tweed River and beaches producing some of the best bream fishing the region has seen for several years.

The blackfish bonanza keeps rolling along here and any of the spur walls along the lower reaches of the Brunswick River are producing bag limit catches. As I said last month, the fish aren’t huge but the large numbers make for good fishing. Some years the blackfish are very tide oriented but this year they are being caught at all stages of the tide. This is probably because there are just so many of them that they can’t afford to be fussy.

Most of our spur walls are better suited to the run-out tide, with the first half generally the best option.

Tailor have been working the river in reasonable numbers. Spinning or casting unweighted pilchards off the walls during low-light periods is a good option. I’ve even braved the cold this month and had a go off the beach. Most trips I was successful to a degree but never got a large number. Two or three tailor is enough for a feed anyway.

I even fluked a school jew one night. I was fishing the close to home beaches from South Golden Beach to the North Wall, but around Wooyung fishers were getting bag limit numbers of tailor for a while.

Our netters recently got a hit of pilchards on the beach and they were processed by Tweed Bait, so some great quality pilchards have been in the bait shops. The best I’ve ever seen in fact. The tailor have been loving them and they are out-fishing cut bonito, even for the big fish.

Snapper are loving them too and it gives you a lot of confidence when you bait up with a shiny, firm pilchard.

On the close reefs, jew and snapper have been in reasonable numbers. Add in a few moses perch and maori cod and you should come home with a good feed. White pointers aren’t strangers to our coastline and have been causing problems for our board riders. While fishing of an evening recently I was visited by a welcome stranger that caused no dramas whatsoever. A little fairy penguin popped up in our berley trail and for 20 minutes swam around the boat quacking (for want of a better word) at us. I’ve heard of the occasional penguin up this way over the years but this is the first one I have seen.

With the massive schools of pilchards and slimy mackerel around, it has been a great year for bird watchers. Gannets have been about in their thousands, dive bombing the already terrified baitfish. Albatross have been in good numbers too and I had a visit from another new species for me in the form of a northern giant petrel. This monstrous bird swam up to my boat and I hand fed it some bait. I was very impressed with its size and it certainly wasn’t shy.

Out a bit deeper, the fishing has been surprisingly OK considering the number of leatherjacket around. The jackets seem to have stayed over the sand for the most part and our spanner crabbers have found it impossible to work, but on the reefs


they have been avoidable and the more preferred reef species have hung about. It is simply a matter of identifying a school of leatherjacket on your sounder and moving somewhere else. As I sit here and write, they seem to be leaving anyway, so that’s good news all round.

Solid squire and jewfish are being caught on Windarra Banks. Teraglin have been thick but as usual they have their preferred bite periods and can’t be caught all the time. When they are on they are savage though and it won’t take long before you bag out and have to go look for something else.

The 45-fathom line of reefs has been the better place to look for quality snapper from a couple of kilos up to 7kg. The 50-fathom reefs were a bit quieter this month, save for a few pearlies. Parrotfish or venus tuskfish have been reasonably thick on the 30s this month and also on the gravel around Windarra Banks. Quality fish from 1.2-1.8kg are the norm and are always welcome to come over the side.

As a by-catch, flathead have also been thick and make a great feed even if they do lack on the fighting side of things. The dredge has arrived in the Brunswick River, so keep an eye out for it at night as it digs a channel for us. The south wall is being restored and improved too, so that should be good when it is reopened.

‘Til next month, enjoy good fishing and stay safe and away from those great whites if you are taking a dip.