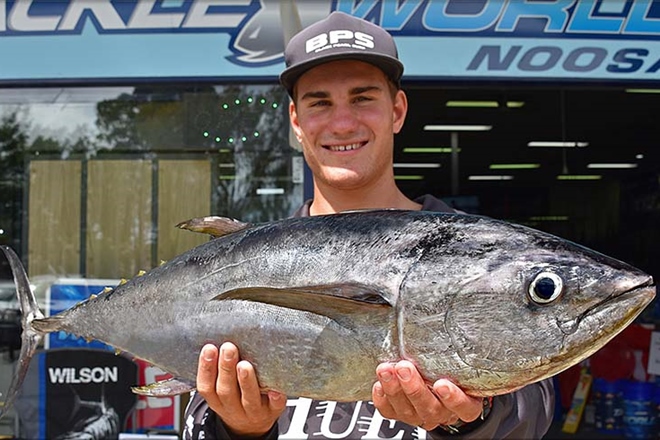 Ben Lavender managed to pick this tuna out of a boil with a well-cast 30g slug. Photo: fishingnoosa.com.au

Great offshore fishing at the moment

The great thing about this time of the year is we usually will see the best of both worlds, with the warmer currents will sticking around and keeping the pelagic bite hot. Tuna have been very active around the reefs in close to Noosa, they are schooled in large numbers around Jew Sholes, Halls Reef and Sunshine Reef,  a range of metal slugs including River2sea Sea Rock, ARMA Radico slugs, Halco Twisty’s have all gotten the job done. For the small craft that don’t feel comfortable making the trip to the Banks or North reef then Sunshine reef is a great option with sweetlip, Maori cod, squire and the odd trout hanging around. Sunshine Reef is also a great place to give Mico Jigging a go, with the shallower reefs you can use some of the lighter jigs. The Shimano Colt Snipers and Palm Slow Blats are a sensational and have both been working a treat. North Reef has been also firing with Moses perch, hussar, grass sweetlip, venus tusk fish and slate bream all hitting the decks. Double Island reefs would be where I would be heading in the hope of bagging some big pelagics, Spanish mackerel wahoo and large tuna have all been reported. The Barwon Banks have also been giving up some nice fish including mauri cod, trout, pearl perch, snapper, cobia and jew.

On the beach, Extra Large bream have been in the gutters around Sunshine Beach at the top of the tide. Flathead have also been amongst them taking frog mouth pilchards on gang hooks, as well as fresh mullet strips and live yabbies. Dart have been spread all along Eastern beaches. Good fun for the young kids on weekends who are still learning to fish, peeled prawns, live worms and squid have been the baits to use for them. The southern beaches around Coolum and Yaroomba are a great spot to chase whiting, live worms, yabbies and fresh pippies have all done the job on the whiting, best tide has been the start of the run out.

The Noosa Rivers has been producing some great fish, Tailor and trevally have been in the systems in good numbers, surface poppers and walkers are the way to go with the Skinny Dog from River2sea a real favourite, the mornings should see some great surface action with these predators following in schools of bait in on the high tide. Areas like Woods Bay and the back part of the Noosa sound are the go, and if you can time this with an early morning high tide you will have everything in your favour. Also give the river mouths a go with slugs on a fast retrieve on the incoming tide, you should also see some good results. Fishing the mid-sections of the Noosa Rivers has also paid dividends, drifting down with the tide flicking prawn profile and paddle tailed soft plastics has  seen anglers picking up some nice flathead whilst working the drop offs near the sand banks. With the rain we have been having and the water colour of the river at the moment, it is also a good idea to head up river and fish for threadfin salmon as they can become active in these conditions. Crabs have also been in good numbers with the deeper sections near the mangroves holding the bigger bucks. Fresh mullet has been the go to bait.