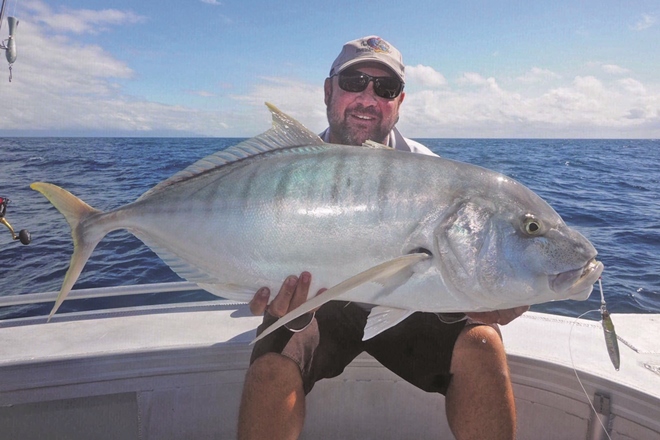 GTs and JPs all part of the Hinchinbrook way

I HOPE you’ve been catching a few fish and getting amongst it over the past month.

I recently hosted my mate Billy Dee from Zeikel Fishing Australia and I managed to get in a bit of fishing for a few days. Honestly I’d forgotten how much I enjoy having a social fish. It wasn’t entirely social though as we were trying to get footage of Zeikel products as well as some edits for Crackajack’s social media campaign.

The tides were pretty massive during Billy’s time with me, with a 0.3m low at Lucinda at about 2.30pm. So we decided to go out for a quick morning session and try popping for GTs. I learnt a lesson of not to wear thongs when popping for GTs because when I hooked the first beast it dragged me to the gunwale and literally pulled me out of my thongs. I was laughing and holding the rod with one hand and the gunwale with the other in an effort to stay in the boat, all while Billy was filming and laughing. When I regained my footing I tried to work the GT hard but unfortunately it got back to the reef and dusted me. There went a brand-new popper.

So I retied another popper and started fishing again. About 15 minutes later, I hooked a high-20kg fish again but unfortunately the fish took the lure on the first pop of a very long cast. And fishing from a dead boat with no one to back the boat off the reef as Billy was trying to get footage, the beast managed to towel me again. Boy this GT fishing is a tough game. GTs 2, Todd 0.

I would have been giving my clients a hard time if this was happening to them.  But when the shoe is on the other foot you feel a little disgusted that you’ve been beaten twice in such a short period. Billy managed to raise a couple of GTs but didn’t get a hook-up, just catching a small spaniard, so we headed off for a bit of micro jigging before going home. With the very first drop on the micro jig gear I hooked an absolute beast that was peeling line off and heading towards the bottom and all I could think was ‘no, surely not three in a row’.

I tell you, I was sweating bullets. But after a long and intense fight I managed to get an absolute snodger golden trevally to the net and take some great shots. We had an awesome little micro jigging session where on almost every drop we caught a quality fish. Time was up and we had to get back to the boat ramp before it was too low to get in through the leads. I thought we might have left it a little too late due to the lure of ‘just one more fish’, so the big Suzuki got plenty of herbs to get us back in time.

The next day we took Billy’s boat for a run and it was nice to be in the passenger seat for once. We ran out to the outer reefs looking for dogtooth tuna but unfortunately it was too rough to get past the outer reefs. Instead we had to stay in the shelter of the coral cays for a day of fishing the coral flats. We had a number of hits but unfortunately the fish just weren’t hooking up. I was beginning to think there were no hooks on the lure. Numerous times we’d watch trout come up and inhale the stickbait, I would strike hard for a hook set and then the fish would swim 2-3m and open its mouth to spit the stickbait out.

In the end I managed to catch a few solid trout, an absolute cracker yellow sweetlip and a quality GT off the flats.  Billy also hooked several big trout and a couple of absolutely dinosaur trout smashed him, taking brand-new stickbaits with them. That’s what this kind of fishing is about – no risk, no reward. If you haven’t done this sort of fishing, it is really good fun. Drifting across the shallow reef flats casting stickbaits and watching all manner of reef fish diving out of coral and smacking your stickbait in a beautiful environment is just magical. The colours of the coral and crystal-clear water make for truly memorable fishing.

After casting our arms off for most of the morning, we decided to head back to a little spot I knew closer to home for some micro jigging. Boy weren’t the trevally fired up, with multiple double hook-ups all afternoon until the sharks started taking fish.  The decision was made to call it quits and head home after an epic day. The next day I took Billy up to the hinterland to chase his first jungle perch and sooty grunter. We were fishing the little rainforest jungle creeks, testing a few of Zeikel’s new lighter rods.

We began to cast our way upstream, catching a few sooties, and Billy got his first JP, which had him over the moon. He even made a little video about it. It was really great to get out there and have a fish again while taking a few days off guiding. It really re-sparks the enthusiasm for this amazing Hinchinbrook Island area we call home. The next day when I was back guiding, boy my shoulders and arms were sore from those GTs and goldens. They really gave me a working over but I loved every bit of it!

Until next month, get up here and experience the Hinchinbrook way.