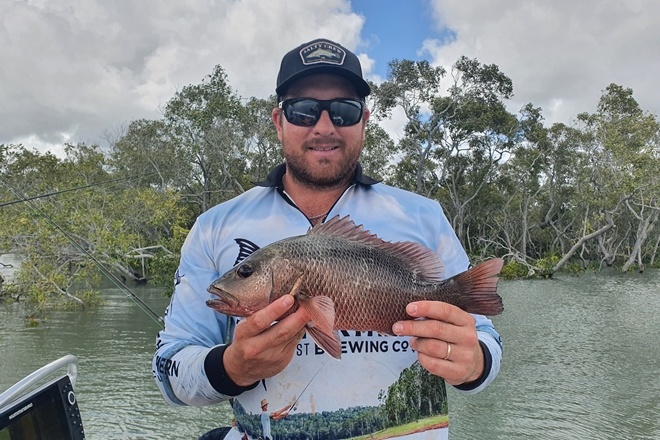 With the weather not playing the game around the Bundaberg area this weekend, it’s going to be hard to get out and chase a few reef fish.

There was some nice mackerel caught over the Christmas break. Trolling lures and floating a dead bait back behind the boat has been doing the damage. We are finding they have been a bit shy when using wire traces.

There has also been some nice grass sweetlip and grunter being caught on baits such as squid, mullet fillets, pilchards, yackers, and gar.

With the recent rains there has been a nice bit of fresh run-off and it has been stirring up the mud crabs.  The mangrove jacks have been firing with the recent storms. They have been caught using a few different methods, like top water lures such as the MMD Splash Prawn in the early morning and late evening. The live baits and strip mullet have had them chewing their heads off. There has been some nice bream and the odd whiting still getting around. The flathead have been firing and are being caught on a range of soft plastics and baits. The recommended baits are: live mullet or fillets, sprat dead or alive, prawns, worms and squid.

There has been reports of big numbers of the bread-and-butter species being caught out of the Burrum system. Whiting, bream, flathead, and grunter are being caught with fresh bait on the flats and deep holes. Recommended baits are live yabbies, live mullet or fillets, sprat, prawns whole or peeled, beach worms and squid.

The crabs have been running due to the recent rain the region has been getting. There has been a few bull sharks getting around also. They are always fun to catch on the light gear.

The lake has been firing lately with some big fish being caught and a few have been lost due to them being too big. The lures that have been doing the damage are the Jackall Squirrel in the 79mm and the Super Squirrel 115mm, using a long cast with a twitch and retrieve. Being a sinking soft plastic, the Molix 140mm Shad slow-rolled back to the boat after a long cast, can be used for the fish that are sitting a bit deeper.

Just remember to fish the wind-blown points and the pressure points in the bays.